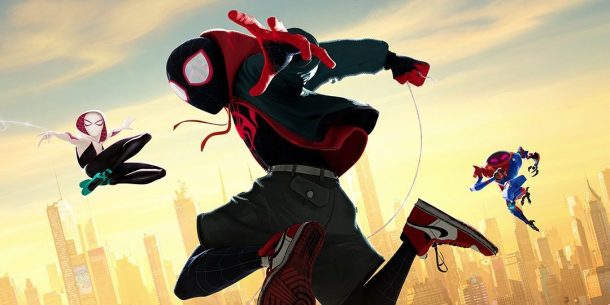 Sony cannot be trusted with Spider-Man. Not averse to tanking a perfectly good franchise by interfering with Sam Raimi‘s third Spider-Man film and then pulling the plug on a potential fourth, the studio added further insult to injury by serving up an abysmal reboot in the form of The Amazing Spider-Man movies – a stinking, heartless rehash that purely existed to set-up multiple cash-grabbing sequels and spin-offs. Yes, Sony saw sense and eventually shared the rights with Marvel, but all that goodwill was undone with the release of the atrocious Venom and the announcement of even more unnecessary spin-offs to follow. As track records go, it’s not exactly a winning one.

So you can understand our trepidation as we sat down to watch Sony’s latest offering from the Spider-Man movie canon – the webhead’s first full-length animated theatrical feature, Spider-Man: Into the Spider-Verse. Has Sony delivered a worthy outing for arguably one of popular culture’s greatest icons? Or is it just another lazy cash-and-grab?

The answer to that second question is, thankfully, no.

It could have been too easy for Into the Spider-Verse to fail – a complex, multiverse spanning adventure that introduces new Spider-Man Miles Morales (Shameik Moore) and five other inter-dimensional incarnations of Spider-Men (or Women), the film has so many backstories, plot-threads and character arcs to pack in, it could so easily buckle. Thankfully, Phil Lord and Rodney Rothman‘s screenplay strikes a good balance from the start, treating each element with the right amount of care and attention, thus ensuring the film never feels bloated or confusing, whilst simultaneously catering to both kids, adults, hardcore fans and the most causal of viewers all at once.

The film showcases a real emotional maturity throughout, with some truly dark moments coming through amidst all the ramshackle action and wacky humour. Jake Johnson‘s older, more cynical and jaded take on Spider-Man provides the film with plenty of wit, but from there the film goes much deeper into this character choice, resulting in a rounded and relatable figure that adults will easily identify with. The lead villain of the piece, Liev Schreiber‘s Kingpin, is given plenty of interesting depth as well, providing an emotional hook behind his nefarious actions, whilst characters like Aunt May (Lily Tomlin), Aaron Davis (Mahershala Ali), Jefferson Davis (Brian Tyree Henry) and Gwen Stacey (Hailee Steinfeld) are equally well-served. One key moment involving Miles and his dad, Jefferson, is particularly affecting, played with the right amount of pathos and understatement by the actors and animators involved. It’s not the only moment to elicit a genuine emotional reaction here, but it perfectly sums up how mature Spider-Verse can be, despite all the super-heroics and comedic spectacle.

Ultimately though, this is Mile’s story and it’s here that the movie truly becomes something special – like the best origin stories, the film presents us a character that is flawed but endearing, and charts his growth and development into a real hero in a way that is involving and emotionally accessible. The film makes the smart move to mainly focus on Miles – the supporting Spider-characters provide able back-up in terms of comedy, action and pathos, but ultimately make way when they need to for Miles’ arc. The final, electrifying fight sequence is a perfect example of this, which highlights real restraint from the directors and filmmakers that ultimately serves the finished product well.

There’s a strong emphasis on fun throughout – fan-pleasing in-jokes, wacky and offbeat humour, hilarious wit and wild slapstick partnered with pulse-pounding action scenes combine to deliver a slick animated film that makes full use of its comedic potential. Long term Spidey fans are well-served here with lots of nods and references to everything from past movies and merchandise to classic comics and even memes, with the end credits sting a particular hilarious stand-out gag worth staying till the end for.

However, all of the excellent writing and dynamite performances are very nearly eclipsed by the beautiful, imaginative animation – if there is one true reason to see the film, Spidey fan or not, then the visuals are it by far. The jerky, comic-book aesthetic (complete with colours and line art ripped straight from the classic comics) lends a unique look and feel to the whole shebang. This comic art style drip feeds into the storytelling itself, resulting in unorthodox but interesting visual beats that advance the story in a way most films, animated or not, would struggle to flawlessly achieve. The action sequences are particularly fluid and fast – here we have 360 degree web-swinging and epic battles that no live action Spider-Man could ever hope to achieve convincingly, whilst the camera shots, blended styles, colour palette and character design are all purposed to make full use of the freedom the medium provides.

Spider-Man: Into the Spider-Verse represents a step in the right direction on Sony’s part – an imaginative, unique and thrilling experience for all ages, the film is bought to life by a team of creatives who clearly love and understand the Spider-Man universe. Bold, edgy and incredibly fun, the film plays with form and experiments with animation techniques to ensure an awe-inspiring movie that works on multiple levels. Every character is well served, every gag strikes the right tone, every emotional beat hits the mark. From its breathtaking sequences to its quirky, offbeat sense of fun, its powerful character drama and a very moving cameo from the late Stan Lee, Into the Spider-Verse surely ranks as one of the finest Spider-Man films to date, and without doubt, one of the best animated films we’ve seen in years.

Spider-Man: Into the Spider-Verse is released in cinemas nationwide from 12th December, with previews 8th & 9th. Audiences can see a special preview of the film on 6th December at special charity screenings across the UK, with all Box Office proceeds going to Medicinema.