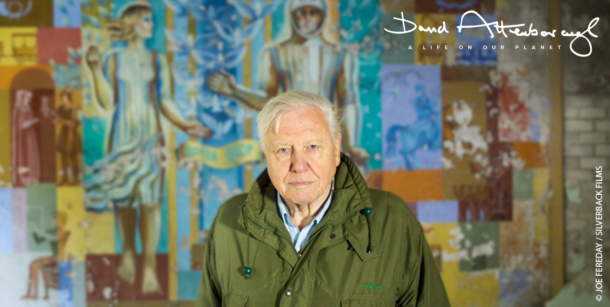 I was lucky enough to simply be in the same room as the iconic, legendary Sir David Attenborough back during the launch for his Galapagos series (and he sat behind me!), which looked at the wonders of those unique islands. As much as that was an absolute wonder, his involvement in the conservation of the natural world has spanned his entire career and continues to do so, with the release of the vitally important A Life on Our Planet, which comes to cinemas on the 16th April across the entire globe.

This unique feature-length documentary, fully titled David Attenborough: A Life on Our Planet, not only celebrates the career of the 93-year-old but also is set to reflect on his lifetime and the devastating changes he has seen on our green Earth. It’ll also address some of the huge challenges facing life on the planet right now, as it provides a timely reminder of global nature loss in one lifetime.

But, of course, Attenborough’s work has always been to encourage positive change and so, with it, we’re set to receive a message of hope for the future as he reveals the ways we can work together now to help save the planet from true disaster. Watch the trailer:

David Attenborough: A Life on Our Planet will be broadcast in cinemas on Thursday 16 April 2020, live from the world premiere at London’s Royal Albert Hall. Viewers will also see Attenborough joined live on stage by very special guests for a discussion on some of the most prevalent issues raised in the film.

Tickets are now on sale for cinemas across the UK, as well as the Netherlands, Iceland, Ireland, Norway, Sweden, Denmark, Finland, Australia and New Zealand. To find your local cinema and to register for updates, visit www.attenborough.film.

It’s produced by wildlife film-makers Silverback Films and global environmental organisation WWF, and will be released globally on Netflix this spring.