Office Christmas Party does exactly what it says on the tin, if you’ve seen the likes of Hot Tub Time Machine, Sisters or any of the current SNL comedies then this is a good blow out for the holiday season. Sure, it’s no Bridesmaids or anything of that superb level but considering it’s a comedy that starts around the centre of office politics, it reaches entertainingly outlandish heights of madness.

There is a small shot at a plot beneath the overall set piece of an overblown, out of hand Office Christmas Party – don’t forget this is American-style big, not UK – and it all concentrates on the estranged family relationship between T.J. Miller’s Clay and Jennifer Aniston’s Carol. She’s a tight-fisted CEO of a tech company that’s co-run with her brother (Clay), and she’s threatening to shut down his branch. However, he’s got two days to find a way to boost business and one of these ways involves a big party to try and land an important client. Of course it does, it’s Christmas! 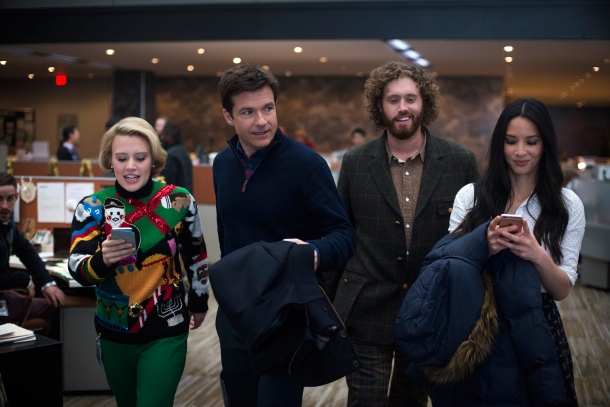 Directors Josh Gordon and Will Speck are reunited with Aniston and Jason Batman’s Josh (who they worked with on The Switch), and they’re a good on-screen pairing but our lead screen actors are really the effortlessly entertaining Bateman and the classy Olivia Munn, who plays tech-savvy Tracey and plays a key-role in proceedings. There’s also a classic Kate McKinnon as a stuffy HR manager giving it her best, and Rob Corddry bringing his usual steady range of angry comedy and quick laughs.

Office Christmas Party is best served with a few drinks, a step-back on over-analysis and the willingness to be up for a laugh. It’s also slightly bizarre that it made me miss the possibility of a real office party because no-one seems to be allowed to do anything beyond work in the work place anymore; I only hear stories of the old days… Overall though? The film is utterly ridiculous, undoubtedly raucous and it’s waiting at your door with a beer and a desire to party, so just get involved and get on with it.

There are very entertaining outtakes with the end credits, plus the Blu-ray contains an extended version of the film, as well as the theatrical, plus loads more outtakes, deleted/extended scenes, audio commentary and featurettes.

Office Christmas Party is out now on digital download, and on Blu-ray and DVD on 13 November