Jungle is one of those films that make you wonder why it hasn’t had more recognition; this isn’t just because of the almost unbelievable true story that it’s based upon but also due to the transformative, powerful performance from Daniel Radcliffe in the lead role.

Based on the real-life 1981-set story of three backpacking friends who try to survive after getting lost in the Amazonian rainforest, Jungle starts slow but builds gradually to the remarkable tale of Yossi Ghinsberg (Radcliffe) and his 17-day fight to stay alive deep in the rainforests of Bolivia. In the early stages, disregarding the reality behind the movie, I had my doubts over whether we’d attach ourselves enough to the characters to feel involved. Greg McLean’s direction keeps the focus tight on individuals and so we don’t really get a feel for the scale of where they’re trekking but, stick with it, because these early decisions are purposeful.

First of all, put yourselves back in 1981 when backpacking was rarer and obviously no internet, mobile phones and so forth. In the modern era, it’s hard to get off the beaten track without still having connectivity and so while Jungle might seem unusual for a younger audience, this is how everything used to be… and it’s not even that long ago. When three friends, Yossi, Kevin (Alex Russell) and Marcus (Joel Jackson) meet Karl (Thomas Kretschmann), a man who promises adventures beyond the usual tourist trails, they’re sceptical but it’s not long before they all agree that some unique adventure is what they’re after. What starts out as a genuine escapade, soon takes a turn for the worst when one of the members suffers injuries and choices begin to waver. 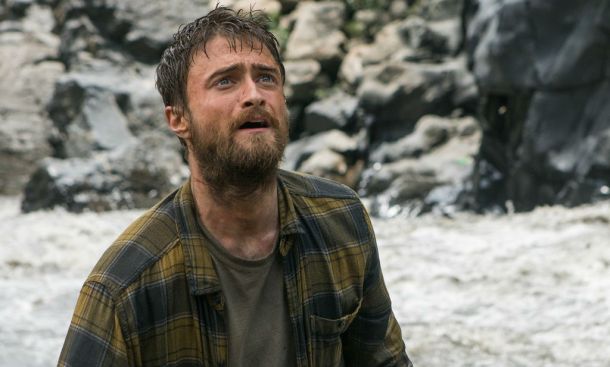 Don’t get this film wrong though, Jungle isn’t some ‘mysterious’ ghost-like story but by the end it undoubtedly offers up an insight to extreme degrees of human survival and misery.  As mentioned earlier, McLean starts off with a slow-paced narrative as our team learn their way through the jungle and try to get used to the paranoia of the darkness, and a psychological impact they didn’t expect. These moments also reveal what kind of pressure different kinds of people can deal with and, of course, things that some can’t deal with at all.

A rough and ready story soon turns sourer as the group is split apart due to wounds and growing tension. It’s from here that the close shots begin to expand and you’re shown how far and wide the jungle really is; this works impressively. Although Jungle is about all four characters involved, it’s Yossi Ghinsberg who’s the main focus and his anguish and desire to keep going is exceptionally portrayed by Radcliffe. His performance is always strong and in Jungle he moves up another level as times get tougher and tougher. From Yossi hitting a downward spiral of self-denial to the balance of his deep-seated desire for survival, Daniel Radcliffe is absolutely outstanding.

Jungle is an enthralling, devastating and occasionally hard-to-watch dedication to the real-life Yossi (watch the extras for some very insightful interviews with him and the cast) and, with it, comes an underrated movie with a deep assurance that survival and belief can go hand-in-hand. I left with the feeling that the basic human spirit can always be outstanding plus that underlying feeling that life itself never be underestimated.

Jungle is available on DVD and Blu-ray now – Order: http://amzn.to/2D8fJJb