Directed by David Gordon Green, and starring Jake Gyllenhaal, Tatiana Maslany and Miranda Richardson, Stronger is based on the real-life recuperation story of Boston Marathon’s survivor Jeff Bauman, a Boston man who lost both legs in the horrific bombing of 2013. Gyllenhaal plays Bauman, and while it is a film about recovery and coming back to take on the world in front of you, it’s also a much deeper, real reflection of the true nature of terrible psychological and physical trauma.

What’s particularly interesting about Stronger is how quickly we connect with Gyllenhaal’s Bauman, who has that everyman feel to him. In the post-bomb world, we’re shown that he likes a drink, and doesn’t always take control of, or turn up to, his responsibilities but somehow he’s also an honest, passionate type of guy. While out with his mates, we learn that he’s currently single but ‘again’ after breaking up with his girlfriend Erin (Maslany). She comes from a better background than Jeff, that’s shown clearly, and if this took place in the UK we’d no doubt be talking about a working class boy falling for a middle class girl. This is important because Erin’s family aren’t initially convinced he’s any good for her and in those early stages, he’s probably not, but that doesn’t take anything away from their connection and love for each other.

So while they get on, he’s not reliable and this is one of the reasons why they keep breaking up. This is especially obvious when he’s out in the pub, but he still decides that to win her back by supporting her at the finish line of the Boston Marathon that she’s taking part in. Sadly, and tragically for others, this was the moment that two bombers planted two deadly rucksacks and made a run for it, on April 15 2013, the bombs went off killing three people, injuring hundreds and 16 people also lost limbs, Jeff was one and both his legs were decimated by the blast.

After that moment, we’re taken through the disbelief and struggle between the families of who’s supporting who, the long road to recovery that’s beyond fraught with pain, anguish, heartache and – of course – physical pain for Jeff but also the tightrope of Erin and Jeff’s relationship. Stronger moved me to tears because it delves deep inside the basics of humanity, straight into the soul and then slowly rips apart the spirit before gradually rebuilding it through the notion of hope, strength and the importance of family and loved ones. 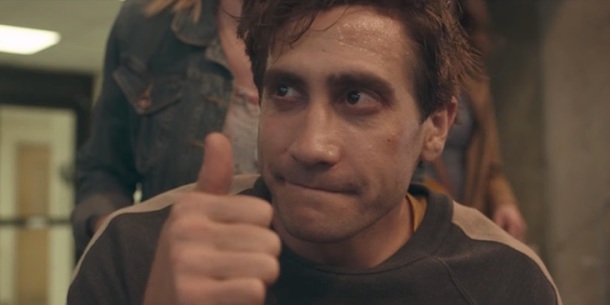 What could easily be over-emotively made is authentically reconstructed by the Stronger cast that includes Gyllenhaal’s astonishing, exceptional performance, which is everything we’d hope and expect from such a great actor, but also his mother Patty played by Miranda Richardson. She’s somewhat a powerhouse of self-destruction and yet utterly committed to helping her boy. Richardson is a chameleon of change and gives a fantastic, honest vision of a woman who wants to help but doesn’t always know how to do it. Tatiana as Erin is also a solid focus of understanding, always trying to keep everything together for everyone and trying not to break down herself but she will, because who wouldn’t with such an intense life around you.

Jake’s Film Company Nine Stories helped get this real-life tale out to the masses and with Sean Bobbitt’s smart cinematography alongside David Gordon Green’s touching direction, Stronger is a powerful, candid and respectful film that has a lot of heart and also hits home hard.

Stronger is available to own on Digital Download today and DVD and Blu-ray from 9 April. #BostonStrong