Like a good film or book, I woke up 48 hours after the show with thoughts still lingering in my mind on David Baddiel’s My Family: Not the Sitcom show at Exeter Northcott last week. While I’d heard positive feedback online, and re-shared by Baddiel on his Twitter feed, there wasn’t much specific detail as to why the evening was making audiences both laugh and cry in quite equal measure, so I headed in with an open mind.

In truth, for me, any positive show experience should be about learning the secrets that shouldn’t always go beyond the bubble and you’ll be pleased to know I’m not here to change those unwritten rules but it wouldn’t be much of a review if I couldn’t feedback how much it resonated, and how brutally honest and funny it is despite seemingly depressing subject matter.

To offer some background, which is a given, David Baddiel’s My Family: Not The Sitcom is about the sudden death of his Mother (Sarah) and how his Father (Colin) is suffering with dementia now but, much like life, that’s not the essence of everything we were there for. Baddiel discusses the real people behind the clichéd expectation of how we think our parents or relatives are, and he came to this conclusion after his Mother’s funeral in response to people saying how ‘wonderful’ she was and while it’s true that she was, it’s also a real-life tale of the humanity behind the façade of family and the joy they can bring, especially with all their quirks, passions and frustrations. 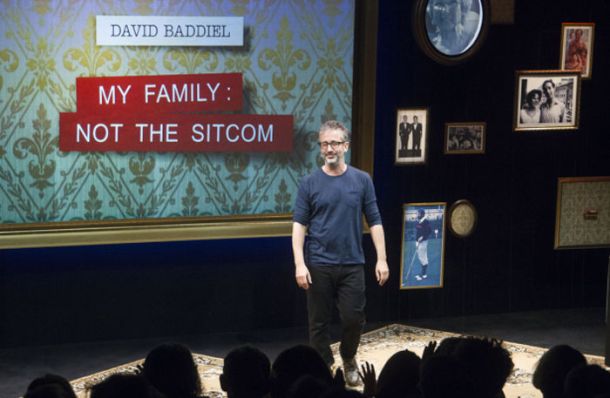 I grew up watching Baddiel and Frank Skinner in various forms on television, from their fantasy football show to their comedy and, particularly, the excellent Baddiel and Skinner Unplanned which used to screen live on ITV late night. The show consisted of the pair sitting on the sofa, with a live audience in front of them, as they took questions and subjects from the floor, completely improvised. That edgy side of television doesn’t really happen today, there are some that go under that guise but they’re far more structured, but the reason I mention it is because David’s Mum once appeared and early on he offers this up as an insight to the type of woman she really was: Bold, honest and loving the spotlight.

Themes of his Mother, in particular, loving the limelight scatter the show from start to finish but it’s never with anger or disappointment, it’s always with a fond recollection – even when she embarrassed him with her stories of her sex life. Let’s get one thing clear though, Sarah Baddiel wasn’t just your ‘crazy’ parent, she loved telling stories about her family history, as well their sex lives, and did it with complete commitment. So in the show, and over a couple of hours, David tells you everything you need to know, however brutally candid it is. 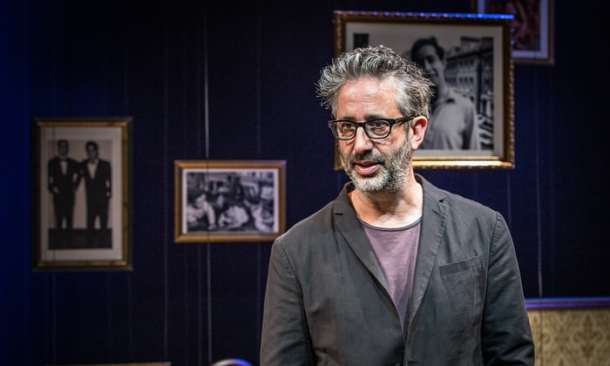 What’s particularly perceptive about My Family: Not the Sitcom, and it helped that I knew a few other people who saw it independently, is how it resonates into your mind, where you recall moments of the show that filter back into your head at random points of the day. It’s that kind of storytelling that connects to make Baddiel’s show distinctive compared to your ‘classic’ comedy show. While some comedians have found a place in pushing the ‘TMI’ insight to their lives, Baddiel’s method offers up significance rather than just doing it for reaction.

The show is an honest, funny reflection of all of our lives as we grow older and the importance of pointing out that although no-one is ‘perfect’, the way they fit into your life is what’s vital. It’s perhaps clear that Baddiel shares hilarious and heart-breaking stories to help any ongoing mourning of his Mum’s death, and his Father’s fight with dementia, and while this isn’t something you’d expect to be quite so heart-warming, the cathartic escape from the darker side of existence really impresses and because of that, it’s one of those nights you simply have to “experience” for yourself.

Book now for My Family: Not the Sitcom near you: DavidBaddiel.com