What better way to celebrate the 30th anniversary re-release of standout 80s teen hit Heathers than by giving the screening opportunity to someone who’s never seen it (and wasn’t even thought about in 1988)! At Critical Popcorn we’ve done just that and, boy, did I enjoy my first time.

Winona Ryder (one of the late 80s/early 90s most bankable names) features as Veronica Sawyer, the good girl to her high school’s mean-girl clique, the Heathers – ringleader Heather Chandler (Kim Walker), Heather McNamara (Lisanne Falk) and Heather Duke (Shannen Doherty). The foursome roam the school’s halls, known for their catty remarks, fierce sideeye and fearsome power over the rest of the student body. Veronica, clearly uncomfortable with the group’s cruel antics, soon catches the eye of moody loner, J.D. (Christian Slater). As the pair hit it off, Veronica lets J.D. into her big secret – she can’t stand her friends and sometimes imagines what it would be like if they just disappeared. Her wish is granted when J.D. conjures up a plan to scare Chandler, ‘accidentally’ killing her in the process. Framing it as a suicide, the pair get away with the murder, but this is just the beginning – J.D. has a taste for blood and he likes it. Soon, the pair are picking off and doing away with the school’s bullies, but when will it become too much for Veronica? 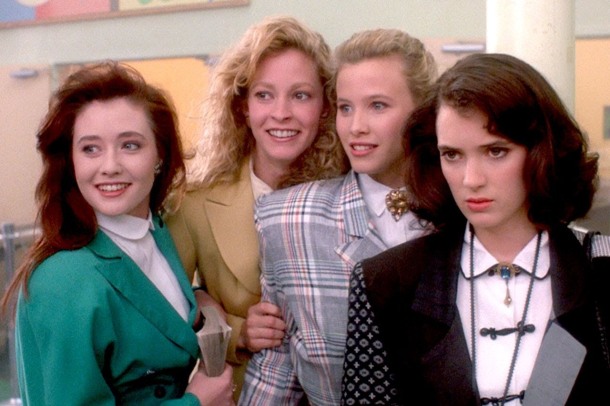 Heathers was one of the original 1980s cult teen comedies, but went far beyond the wholesome feel of The Breakfast Club or Sixteen Candles, and with the tagline of ‘Best friends, social trends and occasional murder’ we can see why. We’re shown the truth behind-the-scenes of the Heathers friendship group, a group that on the surface seems like an enviable place to be. None of the girls can stand each other, most of all Heather Chandler, the sartorially stylish but selfish star of the four. When she gets what’s coming to her, it’s a battle of the remaining Heathers (and Veronica) to land the leading role, but with J.D. on the prowl they’re probably better off shrinking away into the background.

Ryder as Veronica shines, with her natural quick wit and sassy attitude, both of which initially attract J.D. to her. Slater as our bad guy is also genius casting, with his almost startling good looks and smooth charm (I can now see why Clueless‘ Cher was obsessed with seeing ‘the new Christian Slater‘). The pair have obvious strong chemistry, are entertaining to watch together, and have gone onto bigger and better things – if only we could go back and let them know that this was just the start! With a cast full of big 80s names, some of whom are still working in the industry 30 years later, this isn’t one to be sniffed at. 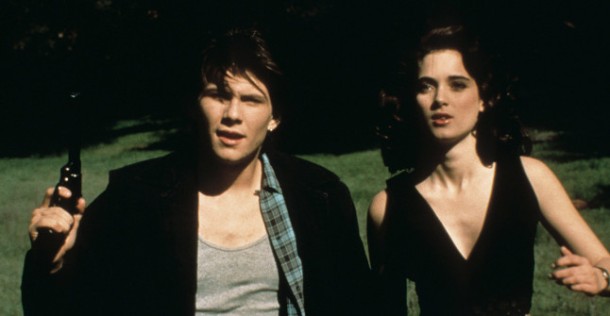 Though three decades have passed since its initial release, Heathers is still whip-smart and incredibly relevant to today, especially given the popularity of the teen/thriller/horror genres (or a combination of the three). The Mean Girls of the 80s, the film deals with themes of jealousy, mental health and redemption, making this a title  that will continue to appear in ‘cult classic’ lists for many years to come.

While The Breakfast Club gave us a glimpse into teenage stereotypes and turned them up to 100, Heathers tells the truth – high school is hard, teenagers can be the worst, and plaid-on-plaid is never a good look.

Heathers (the 30th Anniversary 4K Restoration version) is in UK cinemas now, and on available digitally from 20th August.