Geostorm director Dean Devlin follows up his ludicrous 2017 disaster-movie with Bad Samaritan, a film possessed with a slightly more plausible premise then that of aforementioned film. We say slightly, because it certainly doesn’t take long for proceedings here to venture into the realms of absurdity.

Robert Sheehan plays Sean, a restaurant valet and down-on-his-luck photographer, who also moonlights as a burglar, robbing the rich customers who frequent the restaurant he works at whilst they dine. Unfortunately, Sean’s easy-scam takes a turn for the horrific when he breaks into the house of the wealthy Cale Erendreich (David Tennant) and discovers a young girl that the sadistic Erendreich has been torturing for kicks. Sean thus faces a dilemma – save the girl and risk arrest, or do nothing and remain free.

The premise is solid enough, though the script never quite taps into the full potential of such a dark premise. Instead, proceedings settle into a constant cat-and-mouse game between Cale and Sean, with each going to great lengths to get one over on the other. It is here that the film grows more absurd with each passing moment, defying logic and never quite justifying the actions of the characters, whether they be protagonist or antagonist. 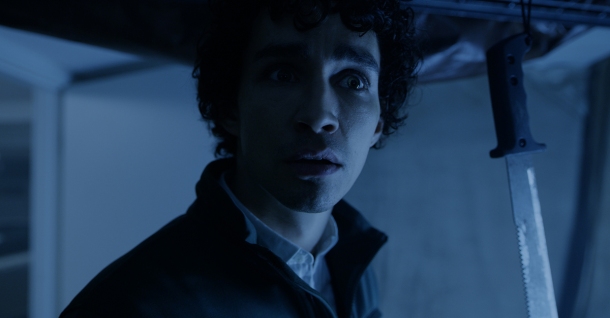 Pacing issues also somewhat handicap the film, which certainly has the potential to be something greater, were it given to less awkward exposition (the odd Horse breaking subtext that plays throughout feels somewhat tacked on and ineffectual, merely present to make Cale stand out from other onscreen psychopaths). There are some odd creative choices present too, especially towards the end, where a tense moment is played for laughs.

However, despite a mundane script and the odd direction, there are some merits to the performances. David Tennant is both creepy and captivating throughout as the unhinged Cale, whilst Robert Sheehan is a likeable leading man, capturing our sympathies in even his character’s more morally questionable moments. And Kerry Condon is certainly impressive as the incarcerated Katie, bolstered somewhat by the script, which gives her a bit more to do besides simply scream through a gag.

Performances aside though, Bad Samaritan never quite lives up to the potential that the premise and impressive casting initially promises. There are moments of brilliance in both the direction and the storytelling, but these are oft eclipsed by the more ridiculous and implausible aspects of the plot, not to mention the aforementioned pace issues, which ensure the film never quite shifts into gear when required.

As insane as Cale Erendreich himself, Bad Samaritan certainly defies expectations, though perhaps not in the way you would expect.