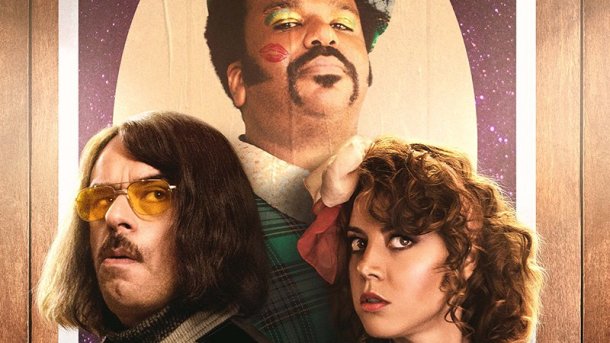 Bizarre doesn’t even begin to cover An Evening with Beverly Luff Lin, the latest comedy from the man who bought us The Greasy Strangler, Jim Hosking. Suffice to say, convention goes out of the window with a bullet lodged firmly in its skull.

Focusing on Lulu Danger (Aubrey Plaza), a bored housewife trapped in an unsatisfying marriage with a debt-stricken diner owner (Emile Hirsch), the film follows Lulu as she embarks on a great escape from the drudgery of her marriage, eloping with a hit-man (Jermiane Clement) to a seedy hotel in order track down mysterious man from her past – the titular Luff Lin – who happens to be there on a one-night only theatrical engagement.

For many viewers, the whole affair comes across like a cinematic culture shock – ridiculous set-ups, deliberately flat performances, weird character motivations and even weirder interactions, plus a never-ending string of strange sight-gags purvey throughout, and by the time it’s all over, you’ll be left none the wiser as to what the point of it all was. Hosking is confident and assured in his direction, skewing convention and refusing to play it safe, with much of the humour coming as a result of the unorthodox characters and their unrealistic actions and reactions.

Gathering together a cast of comedic regulars, including Plaza, Clement, Matt Berry, and Craig Robinson, for what is arguably one of the most strange and subversive alternative comedies ever conceived, Hosking enlivens a rather dull tale of unrequited love and thievery with his trademark weirdness. The insane nature of every visual element, the oddball performances and gung-ho directorial flourish paper over the script’s more obvious cracks, ensuring that the film never drifts into boring territory.

Despite this inventive approach, the film’s jokes fail to land as often as they succeed. The eccentricities of the story and the characters begin to grate around the halfway mark, and the film begins to suffer as a result of its diminished returns. For all it’s originality and subversiveness, the story is unable to keep the momentum going, and the film’s second half certainly drags.

That all said, the finished product at least offers something fresh for cinema-goers (though don’t ask us what said-something is, we’re still trying to understand the point of the whole endeavour ourselves). An Evening with Beverly Luff Lin is worth a watch for those tired of the more conveyor-belt comedies Hollywood usually manufactures, but heed our warnings – it certainly won’t make a lick of sense.

An Evening with Beverly Luff Lin is released in UK cinemas from 23 October.

Head here to read our interview with Director Jim Hosking at Sundance London earlier this year.