It is a rare occurrence for me to be left speechless by a film. When one does, I know it’s special. Three Identical Strangers is one such film. Prepare to be amazed.

Robert Shafran was 19 years old in 1980, a new student at Sullivan Community College, in the Catskills, NY. After driving up from his home in Scarsdale, he’s met with fellow students saying hello with wide, open smiles, wishing him well, and “Eddy! Welcome back!” Who’s Eddy? He’s known as Bobby. And this is his first day…

Thoroughly confused, Bobby reports to his dorm room, only to be met by Michael Domnitz, with his jaw on the floor. After a brief exchange, Michael asks Bobby if he was adopted as a baby, to which he confirmed. “You have a twin!” Michael shouts, grabbing Bobby and dragging him down to a payphone, where they call the house of Eddy Galland, a friend of Michael’s from Sullivan who had attended the previous year and had dropped out. After driving for hours, Shafran and Galland meet, long-lost twin brothers, finally together after 19 years apart. Hard to believe? This stranger-than-fiction story is about to get even stranger.

Months pass. Bobby and Eddy appear on the  front of newspapers across the country. One such paper lands in the hands of David Kellman, a student attending Queens College, left astounded as he stares at a photo of the pair, his face in double staring back at him. After contacting the respective families, it’s confirmed – Bobby, Eddy and David are triplets, separated at birth and adopted as ‘singular’ children.

Born on 12th July 1961 to a Jewish teenage girl, the triplets were taken in by Louise Wise Services, a Manhattan adoption agency for Jewish families and children. Fast-forward 19 years, and the three appear on television shows and news reports, host opening nights for the biggest clubs in New York, and even have a cameo in Desperately Seeking Susan, seen swooning at Madonna. Described as ‘clones’ of each other, the triplets are eerily similar despite the two decades of distance, sharing the same mannerisms and tastes, with one show host exclaiming that they like the same ‘music, films, women, and cigarette brand!’

The first 30 minutes of screen-time fly by, full of gasps, laughs, and beaming smiles as we see these three young men bond, sharing the time of their lives together, finally. Where can this 90 minute documentary go from here? Surely it can’t have been all good, right? Right, as Three Identical Strangers takes an incredibly dark yet fascinating turn. 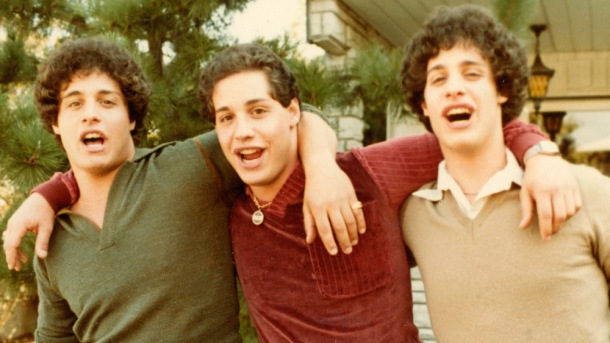 UK-based director Tim Wardle handles this sensitive story with gentle hands, guiding us through using talking head interviews with the film’s leading players, family members, and journalists, alongside archive video clips and photographs from the time, and smartly produced flashback sequences, making the unbelievable believable. Covering a variety of themes, from nature versus nurture to mental health, we quickly turn away from the flashing paparazzi lights of the triplets’ ‘beginning’ to a heartbreaking climax and finale.

Audiences will leave cinemas astounded, unable to comprehend what they’ve watched – I know I did, along with everyone else in my screening. Three Identical Strangers is a bewildering tale, so important to share with the world. Avoid spoilers if possible to experience the full effect of something as special as this. Magnificent cinema – do not miss it.