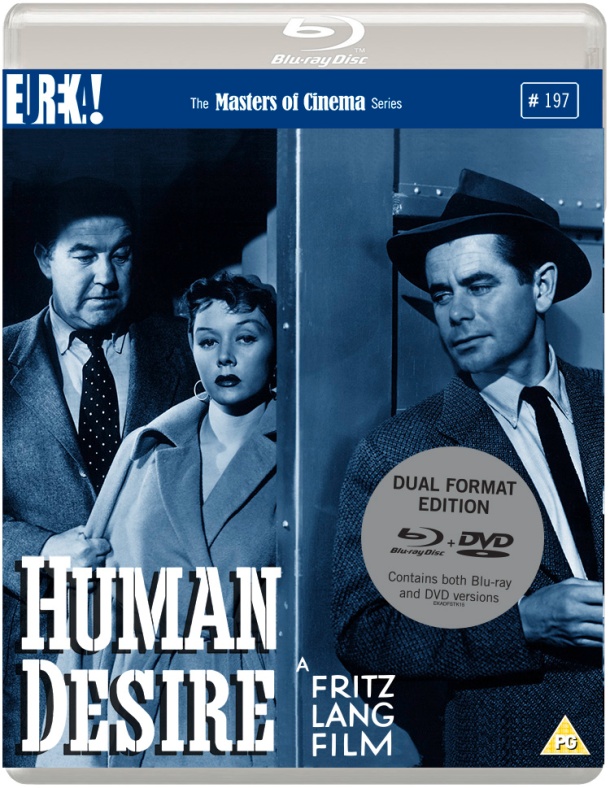 Human Desire, Fritz Lang‘s adaptation of Emile Zola‘s novel La Bête humaine is really more a remake of Jean Renoir‘s 1938 version, bearing little resemblance to the novel, and you can’t help making comparisons to the Renoir film, and while Human Desire may lack the raw emotion and melodrama of the earlier version, it’s also more refined and realistic with a couple of great performances and striking cinematography. This is all beautifully rendered in Eureka’s latest Masters Of Cinema Blu-Ray release.

Glenn Ford is the returning war hero, picking up where he left off working as a train engineer in a small town. He unwittingly becomes embroiled in a murder committed by his co-worker (Broderick Crawford) and quickly falls for the murderer’s wife (Gloria Grahame) who is desperate to escape her domineering, violent husband by whatever means necessary. 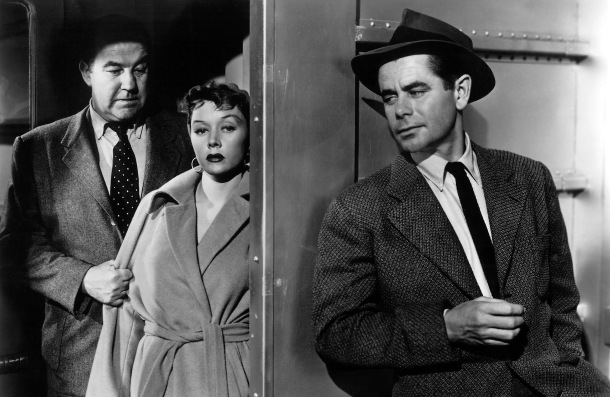 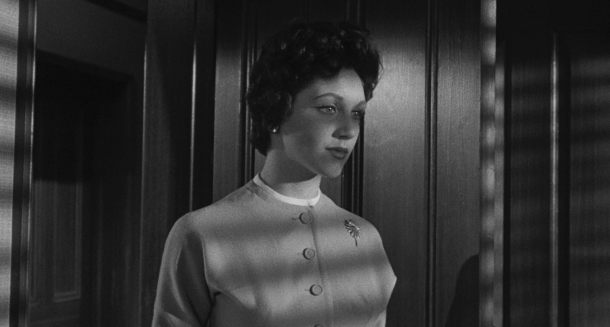 Grahame, fresh from her most notorious role in The Big Heat (Where she famously got a pot of coffee thrown in her face) is almost the antithesis of that role here, playing a woman who superficially resembles a femme fatale but who is actually more vulnerable and world weary than anyone realises. I wasn’t sure at first, but over the course of the film she grew on me, and her final scene is incredibly moving. It’s one of Grahame’s finest hours and she gives a truly tragic performance.

As the imposing husband, Crawford is incredible playing a character who is alternately pathetic and terrifying. Worlds away from his sentimental gangster in Born Yesterday, here he is sweaty, obnoxious and murderously jealous but also all too human. He gives the most impressive and natural performance in the film, and is more than a little reminiscent of Peter Lorre‘s child killer in M.

When there is such depth to the supporting roles you would expect the same for the protagonist, but Lang was always more interested in the darker side of human nature, so Glenn Ford gets short shrift here, almost ending up as the hero by default. He’s a bit too bland, straitlaced and rigid for the film he’s in and, especially compared to the classic noir protagonists, is just too decent overall. He’s tempted by Grahame, yes, but the script and Ford’s performance mean that you never sense that he’s ever in danger and his callous attitude towards Grahame, especially towards the film’s end, feels misjudged and too clear-cut.

What Lang and screenwriter Alfred Hayes do get right is the natural dialogue and the tight, efficient script. It’s a great example of economical storytelling done well. From the foreshadowing of Crawford whittling with his flick knife to the scene between Crawford and one of Grahame’s more promiscuous friends, which perfectly sets up the jealousy and insecurity that consumes him later on. The film also avoids a lot of the more obvious tropes of the genre and is refreshingly unpredictable as a result. Lang’s background in silent film and German Expressionism means the cinematography is also incredibly striking, with the train based setting recalling the angular set design of his early films. 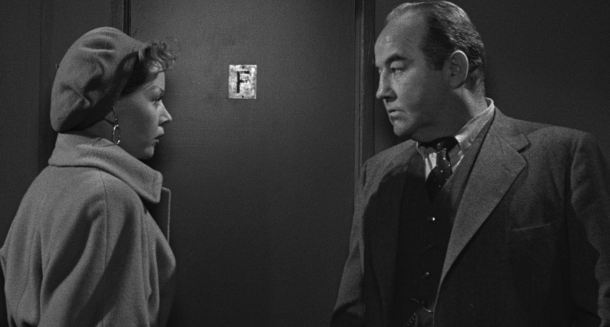 If Human Desire had a less abrupt conclusion and a more dynamic central character it could conceivably be considered a classic, but as it stands it’s one of Lang’s lesser works. It’s a strange film overall; tonally inconsistent, but engaging, unpredictable and expertly directed, with both Crawford and Grahame turning in excellent performances.

The Blu-ray transfer is great, bringing out the best of the cinematography. It looks crisp and clear with virtually no noise – There are still traces, but I expect this is unavoidable with an older film like this. There’s not much on the special features front, which is a tad disappointing for a Eureka release, but there is an in-depth interview with Tony Rayns which is insightful and interesting.