While the eventual conclusion of First Man is, as you’d expect, the historic moment Neil Armstrong walks on the moon, the title also refers to the focus given to Damian Chazelle’s film which is based on the official biography of Armstrong by James R. Hansen, and Ryan Gosling’s portrayal delves deep inside the life and psyche of the man who made history.

While deciding to centre on Armstrong could be decided a ‘brave’ move by many, when you begin to understand the real-life of an extraordinary man and his personal story behind the first manned mission to the moon, we’re offered an intimate that’s equally compelling and heart-breaking. Chazelle’s film uncovers the successes and the lows, alongside the impact of every event leading up to the moonwalk both on Neil himself and, more specifically, his family life.

Armstrong is a quiet, clever man with a sturdy focus on getting the job done and such an obsessive desire is fired up, subtly, by the early loss of his young daughter to cancer and a disconnection that evolves from grief. Whether he’d taken on the role regardless of that saddening truth, I guess we’ll know but if it played just a little part in driving this man to such an iconic moment, then you wonder if it would have happened at all without him driving forward on tests, trials and old-fashioned bloody stubbornness as he continued to disregard the very real danger he was putting himself in.

Claire Foy’s portrayal of Janet Armstrong does show her spending a lot of time supporting her husband but she’s not just a part player in First Man at all. It’s clear that underneath she’s also the rock of the family. Also, when it counts, she forces the issue of Neil talking to his children and saying ‘Goodbye’, as they never really knew if the mission would be successful or if he’d ever return. It’s a powerful moment, and it proves – and maybe reminds – Neil of his humanity, lost temporarily in the ether with the memory of his late daughter.

Chazelle, alongside Director of Photography Linus Sandgren, makes the choice to build a gradual, intense momentum that’s astonishingly achieved by concentrated, close focus on our leads and their facial expressions, this is very much a character study and even more so when it comes down to Neil and his both personal and professional struggles, and victories. Every sheet of metal, every screw in the rocket or heat/ice on the inside and out of the shuttle is felt, heard and studied, as you would if you were inside a metal machine Earth and fighting gravity to eventually hit the unerring silence of space.

With a heartfelt, honest screenplay from Josh Singer juxtaposing with Justin Hurwitz‘s stirring score, First Man is a poignantly created vision, deftly depicted by two actors at the top of the game but it is, of course, Gosling who shines on through with a restrained, yet resolute interpretation of Neil Armstrong. He offers us everything of a man who keeps things private and, simultaneously, we’re given a truer understanding of the eventual bigger picture, and achievements, of humanity with a universal connection for all of us.

First Man is out on Digital now and on 4K UHD, Blu-ray and DVD on 18 February from Universal Pictures Home Entertainment. 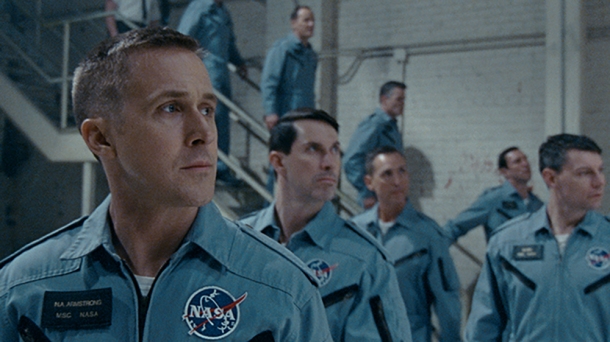