’ve always preferred Amicus to Hammer horror films. While Hammer is synonymous with classic British horror, the films themselves were often campy rather than truly frightening. Amicus films get under your skin in a way Hammer never could. I remember being utterly traumatised by one segment of Tales From The Crypt as a child, and this haunting atmosphere is a constant through the Amicus catalogue. Now Second Sight are releasing some of their most iconic films on Blu-ray, starting with the atmospheric portmanteau horror The House That Dripped Blood.

Written by Psycho author Robert Bloch, this is one of the earliest films Amicus made, with assured direction from first time director Peter Duffell, combining genuine unpleasantness with a wicked sense of humour. The thread connecting all the stories is very thin, but centres around a cursed house and the unpleasant fates that have befallen each of it’s owners. 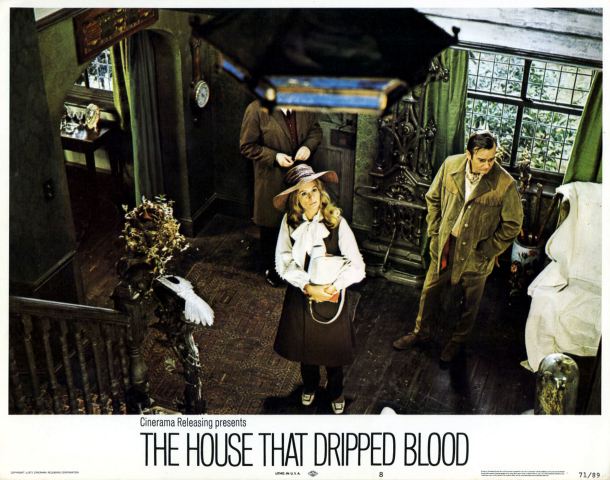 Waxworks is a little more creaky, and relies more on the strength of the central performance of Peter Cushing. Here the lovelorn Cushing becomes enamoured with a waxwork, and gets drawn irresistibly back to the creepy museum. There aren’t really any surprises here, but there is some incredibly eerie, disorienting cinematography, which gives the story a nightmarish quality.

This is followed by the film’s best instalment, although for the most part it doesn’t feel like horror. Sweets To The Sweet is an eerie story featuring the stern Christopher Lee hiring a nanny for his withdrawn, solitary daughter. This is a low-key tale, with an agonisingly slow build towards it’s disturbing ending. Lee is great as the puritanical father, while Chloe Franks is alternately adorable and terrifying as his daughter. More than any of the others, this is the one that sticks with you long after the film has ended. The film ends with The Cloak, a campy, self-referential tale starring Jon Pertwee as an actor renowned for playing vampires, who buys a haunted cloak. It’s tongue-in-cheek, and creepy in it’s own way, but it’s certainly the weakest in the film, so it’s an odd choice to end on.

Overall, this is a bit of a rarity, an anthology film without any real duds. Waxworks is creaky, and The Cloak is a bit too knowing for it’s own good but they’re both a lot of fun, and the other two are bonafide classics. Duffell gives each story a distinct feel, from the hypnotic, dream state of Waxworks to the oppressive, sinister Method For Murder. The House That Dripped Blood isn’t particularly original but is absolutely laden with atmosphere, and it’s a great showcase for the studio’s uniquely subversive style of horror.

The House That Dripped Blood Blu-rays is out now: https://amzn.to/3wlrcz9