Written, starring and directed by Karen Gillan, who you may know as Nebula from Guardians of the Galaxy/Avengers: Endgame and the outstanding Amy Pond in Doctor Who, The Party’s Just Beginning couldn’t be further from the latter as here she plays Liusaidh, a young woman who’s seemingly content sleeping around, getting drunk and spiralling uncontrollably away from day-to-day reality but, of course, with every outward personality, there’s an internal narrative that’s led to her loss of restrain.

Set in Inverness, Liusaidh is initially an entertaining character and, for me, she’s a reminder of that time in your twenties, where you’re trying to find out who you are but not always with much sense of where it’s going, or what you’re doing. However, we’re also witness to the reasons for her state, as she’s trying to blank out the death of her best friend Alistair (Matthew Beard) by drinking to excess and fuelling her body with junk food. We learn this through her visions of Alistair throwing himself off a bridge, as well as other memories that intermingle with her ‘waking life’, and this is all on her trudge home from the pub. But, of course, it’ll take a while before we learn the full extent of the tragedy and why.

The Party’s Just Beginning flashes back and forth through her aforementioned ‘now’ life and fond moments with her now deceased friend. While she’s obviously struggling to connect with anything real, a chance encounter with Lee Pace‘s mysterious Dale seems like something else to be thrown away, like everything else, but things change when he returns to visit and chat. Her life is also altered after she starts answering the ‘wrong number’ phone calls that come into her house, someone has been giving out the wrong details for a Help Line, but she ends up taking on a Samaritan-type role and it also begins to change the view of herself and opens up the loneliness she’s feeling.

Gillan gives a compelling performance, she’s a fire but she’s also desperately lost in her own existence, especially after losing her friend. The journey of The Party’s Just Beginning is a poignant one, deep beneath the surface. It takes on the subjects of drugs, mental health, gender issues but littered with occasional dark comedic moments. However, overlying everything is a brutal streak of reality that never leaves us as we witness her downfall, her self-harm (pursued in a manner in which she seeks out other ethically questionable people to inflict it) and her fight to find meaning. 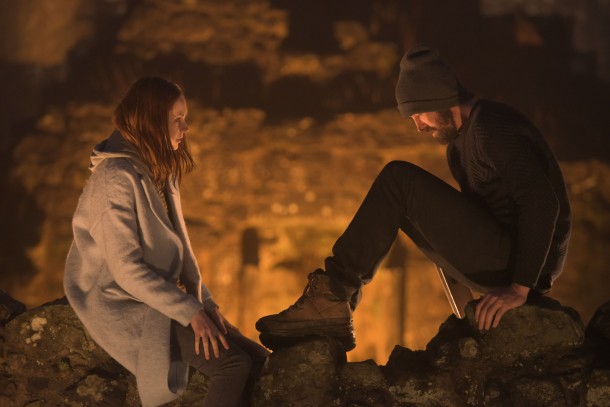 While this is a variable on the coming-of-age story, it’s deftly created with a whole new insight reflecting modern issues and doesn’t pull any punches. While I don’t like to use the word ‘brave’ in fictional storytelling, this is powerful and honest from Gillan who doesn’t shy away from putting everything out there to create a genuine piece of film-making that must be commended. While I think it’d benefit from a different title that suits the subject matter, I struggle to link it to where we’re taken, as this is only Gillan’s feature debut, I’m sure we can expect a whole host of interesting, human-focused films from her in the future.