He’s One of Our Own: The Story of Chris Wilder’s Blades Revolution is, indeed, obviously Sheffield United-focused book but there’s something to be said for a good story and author Danny Hall absolutely brings together all the positive elements that surely any football fan, or club owner looking for inspiration, would want for their team any day or night of the week.

Hall’s book is quite the unique story as well because current manager Chris Wilder is not only a Blades fan, he was also a ballboy and former player. You could rightly call his 15-year rise from being a manager in the local Sunday League to now managing his beloved Blades somewhat of a fairy tale and, so far, the story really is something to behold. 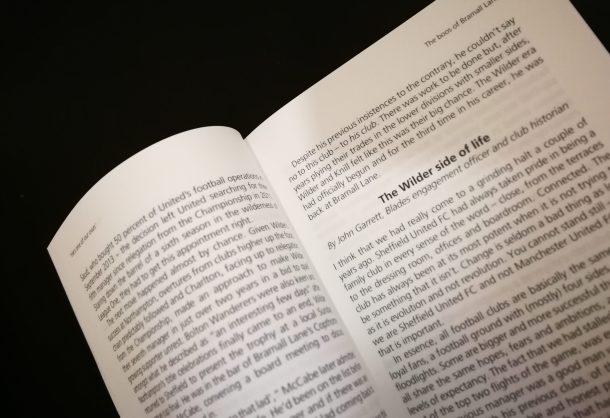 Taking over Sheffield United at one their lowest ebbs in 33 years, and starting with defeats, the mood soon changed as they went on a remarkable run that eventually saw them win League 1 with record points and goals scored. The book highlights how he’s helped bring back the passion for the club, right through from the fans have for what’s happening on the pitch and all around Bramall Lane. That belief had unknowingly faded away after a string of disappointing managerial appointments but now we’re in 2018/2019 and Danny Hall’s book encapsulates the belief that’s come back to the Lane and also those who he’s inspired on the re-build of United.

Hall does this by taking a different approach than others for the book. As well as his own experience as a sports journalist involved regularly at the Lane, they’ve included write-ups and opinion pieces from fans, players old and new and even more connected to the club in one way or another. It means this is definitely a celebration of Sheffield United, but it’s also a reminder of what can be done if everyone behind-the-scenes is striving for the same thing: Success. 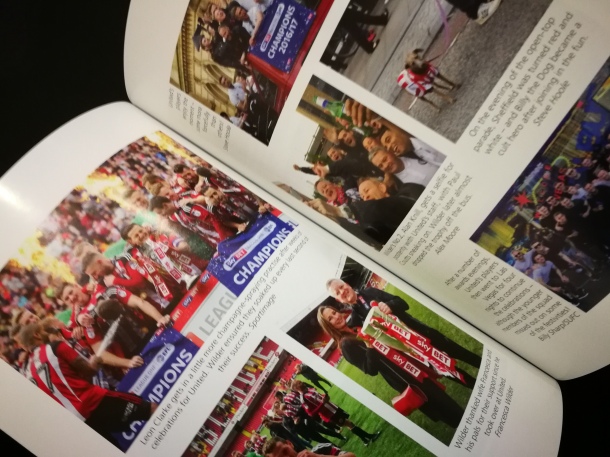 While we certainly learn of the future and what’s come since, it’s insightful to read that there was a point at Sheffield United where a community that had once been strong, even in worse times, had completely started to fade. When you read about stories like Wilder turning up with a screwdriver and taking down ‘inspirational quotes’ himself, that had been placed there by the previous manager, it really does sound like he stripped the club down to its basics to see what he could rescue from the ashes of apathy.

We also learn more of his process by seeing the type of players brought in, ones who wanted to progress and prove themselves, there’s the (now legendary) story of Wilder buying beer for the squad after another defeat -early in Wilder’s reign – because somewhere he knew Sheffield United and what was missing. While it’s clear it wasn’t easy to get that feeling back initially, through constant hard work and a lot of listening and learning from Wilder’s previous exploits, right through the lower leagues and up, he headed to United with a definite idea of what the Blades needed and planted those thoughts back in the people around him. 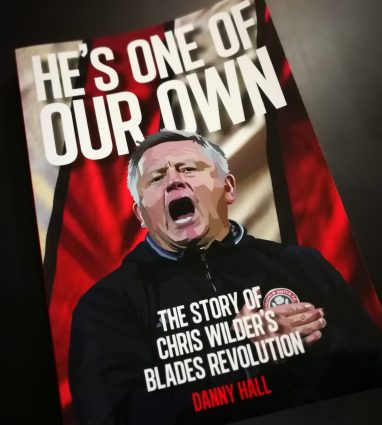 While He’s One of Our Own: The Story of Chris Wilder’s Blades Revolution might not suit every football fan, I’d say it’s definitely worth checking out and if your club is at a low ebb, and you’ve got a lot of sway with what *could* happen, then even more so. The Blades might not be topping the Premier League right now but something more important has returned, that possibility of something better coupled with top-flight-like performances against opponents who’ve spent four times as much and are producing less than they should. You could say United are punching above their weight, given the limited resources, but I don’t think they are. With the right spirit, the right manager and players who want to fight for every moment of their careers, well, that’s what it should be about isn’t it? If it leads them towards more trophies then it’s even more deserved… and who’s to say that won’t happen? Up the Blades!

He’s One of Our Own: The Story of Chris Wilder’s Blades Revolution by Danny Hall is available now.

One thought on “Book Review: He’s One of Our Own – The Story of Chris Wilder’s Blades Revolution by Danny Hall”