For the theatrical release of Overlord, Paramount really ramped up the trailers with some awesome action and playful, bloody crazy, marketing. Once they’d also thrown in the producer backing of J.J. Abrams, I was pumped for this… and not in a ‘vile of serum’ kind of way to create a super-soldier hybrid, which is the solid theme throughout Julius Avery’s film.

So, with all that excitement within, does Overlord hit the fun heights of other Bad Robot projects? Well, occasionally but as events in the narrative aren’t ‘quite what they seem’ nor is the final film as a whole, in comparison to its marketing build-up. Although Avery’s film works its way at a reasonable pace towards our American paratroopers coming face-to-face with Nazi’s unlike any others you’ve seen before, don’t worry they’re still evil, the latter almost doesn’t happen enough.

Whilst we were ready for a crazy Zombie/Nazi film, and mayhem and bloody action galore, Overlord takes a long while to get to that point, with more half the film essentially being a generic war film with a shinier edge than usual. Starting with a huge opening sequence that involves us following a group of US soldiers flying over WW2 Europe to help the cause, just before the para’s are ready to jump, the plane is struck by German fire and begins an unexpected, early decent.

The almost one-shot scene is full of soldier-banter and specific depictions but we stay with lead character Boyce (Jovan Adepo) as he’s pushed from the plane and out in the world of unknown, explosions and anti-aircraft weapons going off all around him, it’s pretty darn intense and sets an intriguing precedent but the film doesn’t really return to that level until the final act. That being said, Overlord is a bit more than your standard affair and this is due to the fun narrative and the superb ensemble cast that also includes Brit Adepo giving a top performance, in a mad situation, as well as Wyatt Russell, Pilou Asbaek (who’s loving it throughout), John Magaro, Bokeem Woodbine and Mathilde Ollivier. 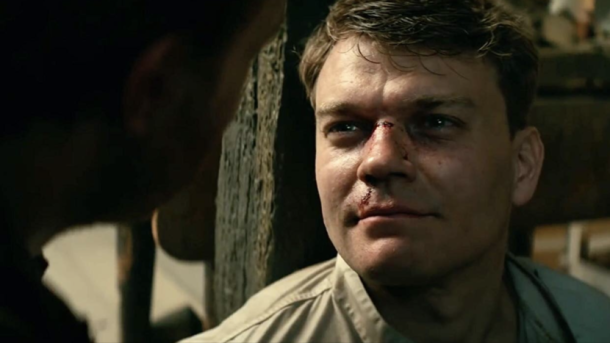 (L-R) Mathilde Ollivier as Chloe, Jovan Adepo as Boyce in the film, OVERLORD by Paramount Pictures

If you don’t know much beforehand, then you’ll probably have a lot more fun because the film does flip from standard war film to chaos and confusion. However, and despite a hugely impressive ‘running’ finale – which has J.J. Abrams written all over it – and a committed cast, I kept wishing they’d let loose a little earlier because once it kicks off, there is so much mad fun to be had. It would have easily benefited from more serum-induced soldiers, more chase sequences and even more gore would have been fine. You remember how batshit crazy Event Horizon goes? They had room for that, as it’s an 18, but they never quite fully open the door of insanity that’s just around the corner, waiting to be released…

The Horrors of War

o   Death on the Ground

The DVD will include the feature film in standard definition and the following Bonus Features:

The Horrors of War

One thought on “Overlord Blu-ray review: “Crazy and chaotic but misses an opportunity for something even bigger””