Somehow it has nearly been 30 years since Neil Gaiman and Terry Pratchett’s Good Omens novel first came to life, and it’s not to say a film or TV series hasn’t been discussed before but, finally, it arrives exclusively on Amazon Prime Video this 31st May and, so, let’s delve a little deeper after we joined the cast and crew at the World Premiere in London earlier this week.

Whether this timing is the will of the gods or demons – or respectively both in this case – it feels right for the characters, the adventure and the beautiful, crazy inventiveness of Agnes Nutter’s Nice and Accurate Prophecies to finally find an even wider audience. You know how it can be perceived that the nature of good and evil always seems so black and white? Well, in the context of Good Omens, there’s so much colour, vitality, and outstanding possibility that it’s quite magnificent what they’ve created. 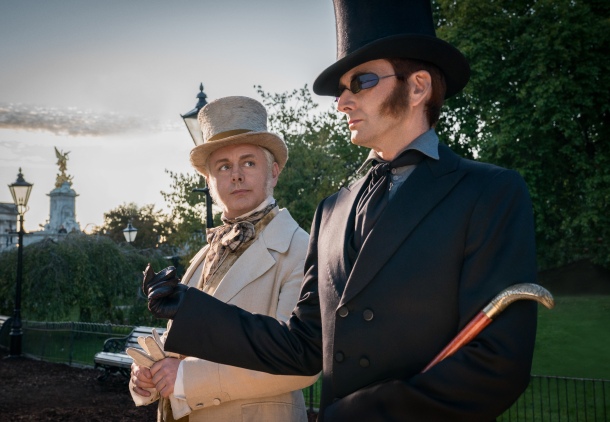 First things first, or third things first in this specific case, Good Omens is definitely a series ‘event’ feature. While the opening episode is full of description and setup for the entire narrative thread to follow, and so you’ve got to concentrate, it’s also a smart primer for everything to come. Depending on your previous knowledge, I’d say bear that in mind and don’t feel too overwhelmed with information, especially in an era of TV shows that over explain, because it’s absolutely worth the longer term pay off once you’re more settled in with a biscuit and hot drink, or other beverage of your choosing.

I can assuredly say that I don’t think I’ve seen a new show so full of life (and death) for far too long now and this is also aided by some perfect casting for the main pairing of Michael Sheen as Aziraphale and David Tennant as Crowley, the angel and demon you’ll come to love and embrace. Whether you know the book or not, you’re invited into this vivid Good Omens world and, for me, both on-screen characters reflect what I’d envisaged from the book. While this initially felt odd, I find seeing characters ‘in the flesh’ always takes a moment, it’s especially true here because they’re so damned impressive and once you hit episode two, you’re strapped in and ready to either smile or scream in a speeding Bentley down Oxford Street. (This is a good thing that you’ll come to appreciate).

Amongst a huge overall cast, for these two episodes we’re joined by Jon Hamm’s exquisite archangel Gabriel bringing his finest once again, Josie Lawrence’s Agnes, Daniel Mays and Sian Brooke as Arthur and Deirdre Young, Miranda Richardson’s delightful Madame Tracy, Adria Arjona as the hugely likeable Anathema Device and it’s all rounded off with Frances McDormand’s God narrating. It’s also important to note how impressed I was at Jack Whitehall’s restrained and absorbing performance as Newton Pulsifer, and you’ll surely love the hell-hound… in any form.

For what’s to come, Gaiman said he fleshed out a couple of episodes, story wise, because he felt he didn’t have enough source material to get a consistent story across, and also that he missed Terry a lot, but if the sizzle reel is anything to go by then this really is going to be a truly unique event series on Amazon Prime. Beforehand, and in the Q&A, he spoke of how he and Terry had discussed getting to the ‘big screen’ and how saddened he was that he died before he got to be involved in the development. Mr Pratchett’s hat and scarf – and a big bag of popcorn – were poignantly placed on the front row and we think he would have loved what he saw, because we certainly did. So, in a very Good Omens way, The End is Nigh but it comes with cake, sublime, surreal direction from director Douglas Mackinnon and it’s set to be spectacular.

Good Omens comes to Amazon Prime Video on 31st May, sign up here if you don’t have an account yet and P.S., get a 30-day free trial if you’re a newbie by clicking here!

On Green carpet on Tuesday evening were the likes of David Tennant, Michael Sheen, Jon Hamm, Miranda Richardson, Josie Lawrence, Adria Ajorna alongside creator Neil Gaiman and director Douglas Mackinnon, we were all treated to a musical performance on arrival by the ‘Chattering Order of Nuns’ and here’s a few select quotes from those key folks involved:

“Terry, who never asked anything of me in all our years of friendship wrote to me and said ‘you have to do this, you’re the only person out there who has the passion and understanding for Good Omens that I have – you have to make it into television because I want to see it before the lights go out’ I thought I had six or seven years of Terry left, but then he died, which suddenly turned [Good Omens] into his last request”

Michael Sheen (on his character Aziraphale’s relationship with Crawley):

“One of the interesting things about the coupling [Aziraphale and Crawley] is how they rub off on each other, they’ve been on for Earth so long and them to The Beatles, nobody else knows what they’ve been through, but each other – just like The Beatles!”

“It seemed to me that there was an opportunity for [Archangel Gabriel] to portray this guy as the boss that everyone has, but everyone hates – who is constantly smiling and telling you ‘great job,’ while also subconsciously saying ‘you’re terrible.”