Upon its theatrical release, I’d heard a lot about Hereditary from friends and fellow writers who consistently offered analysis that it ‘stayed with them’ after they left the cinema and intensely to. As I didn’t brave the darkness myself, there was a question over whether it would be just as mesmerising and could hold the same levels of tension on the smaller screen that a focused, cinema audience can create but even from the early stages, it’s clear the answer is absolutely.

Starting with a black screen and an obituary listing, Hereditary is based around the death of Ellen, the matriarch of the family who dies and leaves behind her daughter Annie (Toni Colette) and her husband Steven (Gabriel Byrne), plus their two children Charlie (Milly Shapiro) and Peter (Alex Wolff), in the house they all once shared. But it’s immediately clear that something isn’t quite right in the house and after mysterious happenings occur, cryptic messages are half-revealed on the walls, and then a horrific car journey scene… all those secrets begin to reign free from beneath the surface. 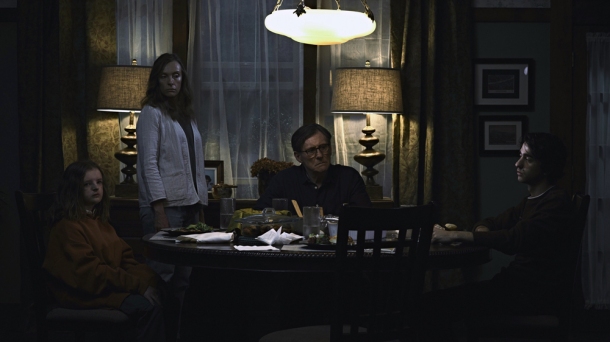 While the overall message within is of secrets and lies, it’s also a smart essay on grief and the levels the mind and body can be pushed to when putting yourself under extreme mental pressure. But Hereditary isn’t a straight-forward horror film either and it’s also exceedingly difficult to review without giving a lot of important moments away, there’s so much shock here from start to finish alongside powerful, heavy-duty performances from the entire cast.

Incredibly, this is the debut feature from Writer/Director Ari Aster and his vision, style and approach bears all the hallmarks of a classic from years gone hither. His choice to fix the focus on the likes of Collette and Wolff in intense moments works particularly well, and those two actors really stand out as ones to remember. It’s helped along by some beautiful and chilling cinematography from Pawel Pogorzelski coupled intelligently with Colin Stetson’s music and a sound department who’ve done themselves proud with an entire world and atmosphere.

There’s so much to discuss about Hereditary and so, with that in mind, you should experience it and come back. Toni Collette deserves any accolade she picks up and that finale? The finest, maddest, freakiest conclusion to any genre I’ve seen in a long time, you’ll be glued, scared and compelled. It’s top notch psychological horror and I’m not always a fan of the modern ones but this deservedly (and terrifyingly) will sit in the memory for a long time to come.

One thought on “Hereditary Blu-ray review: “Terrifying and intense with a stand-out performance from Toni Collette””