The quick, easy answer is… Nope! While we all know there’s a whole load of choice these days when it comes to streaming the latest movies, and you can subscribe to a leading supplier, how about something different with up-to-date films AND no subscription? Well, we’ve been testing out Rakuten TV and what they have to offer and it’s pretty good, even if there’s a few aesthetic tweaks they could adjust to make it look a little cooler.

Initially, it’s the ‘keyboard’ element could be a bit smarter, rather than chase down every letter individually like a really slow typer, but this is an app through the TV and as I’m new to that specific game – I’d usually use the ones through the PS4 or Netflix/YouTube embedded in my Sony – I think it’d benefit from an improvement. The general setup isn’t as smooth as it could be but what Rakuten TV has going for it is the big titles, seemingly ahead of others and that comes with a whole range of positives!

What films do they have?

The last few months have seen the likes of A Star Is Born, Venom and Crazy Rich Asians hit the service, as well as Bohemian Rhapsody and First Man in what feels like immediately. This month sees the J.J. Abrams-produced Overlord arrive, plus Creed II and the highly favoured Fantastic Beasts: The Crimes of Grindelwald – the latter I’ve been waiting to see for ages! So, while the tech has room for improvement (don’t we all?) the selection of films are top notch and that’s exactly why we’ve been utilising it more of late. 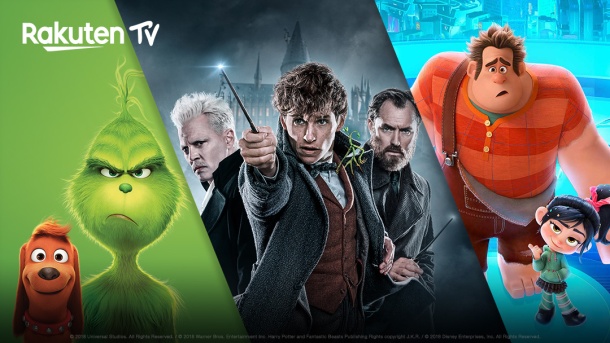 How good is the streaming quality?

In terms of quality, we dived into The Meg – yup, that’s a terrible pun – and also the highly underrated Crazy Rich Asians. Both looked grand on a 50″ Sony, HD streaming without issues from start to finish, and everything you’d expect these days from ANY streaming service in that sense. As a general thing, I don’t know why Standard Definition exists anymore really, once you’ve seen the difference in HD, it’s truly the only choice. Also, Rakuten has a superb bonus because when you sign up as a new user, your first rental will be 99p – Take advantage of that however you wish, it’s a great one.

Fancy giving it a shot yourself? I’d definitely recommend it for popular, easy, up-to-date titles and – again – while it might be a little slower than the likes of Netflix, it certainly doesn’t make it any less of a choice in the plethora of services out there and, as I just mentioned, you might as well try the bonus first film for less than a quid to see what you think!

You can also head to your Smart TV, hunt through the apps (or search) for Rakuten, just look for the logo you can see above!

A little look at some of their titles recently!

4 thoughts on “Rakuten TV: All the best films straight to your Smart TV [Tech Review]”