Fantastically, and for the first time ever on vinyl, Good Omens has been adapted and co-directed for BBC Radio 4 by the award-winning Dirk Maggs in this new, and look at its beauty, Amazon Exclusive vinyl that includes a print signed by Neil Gaiman and is limited to just 500 copies!

The unique four 180g heavyweight black and white vinyl – includes a laser-etched Side B – are presented in illustrated wallets inside a rigid, bound 16 page book, with exclusive sleeve notes written by Gaiman and Maggs… ooh! 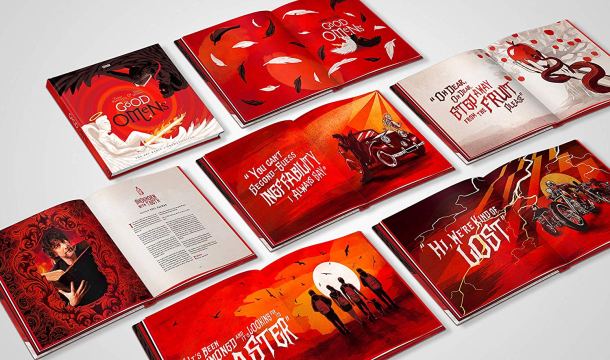 It is, of course, based on the novel by Neil Gaiman and Terry Pratchett, now the basis for a major Amazon Prime TV series (Read our review here!) that’s out now, and this version features Mark Heap as Aziraphale and Peter Serafinowicz as Crowley, with Josie Lawrence as Agnes Nutter, Colin Morgan as Newton Pulsifier and Charlotte Richie as Anathema Device, with the rest of the cast including Phil Davis, Harry Lloyd, Paterson Joseph, Rachael Stirling, Jim Norton, Nicholas Briggs, Neil Maskell, Steve Toussaint, Simon Jones, Julia Deakin, Mitch Benn, Louise Brealey, Mark Benton and many more including cameo appearances by Neil Gaiman and Terry Pratchett.

Pre-order now, it comes out on 2nd August: https://amzn.to/2VYCeFM