2016’s Fantastic Beasts fell within my ‘wonderful surprises’ category and so I found myself at ease heading into Fantastic Beasts: The Crimes of Grindelwald, alongside some genuine excitement and hopefulness that the team involved could, once again, reach the heady heights they achieved with J.K. Rowling’s extension of her Wizarding World that thrilled and amazed in equal measure.

While the first film introduced us to Newt Scamander with a joyful step, and a soft touch, to Eddie Redmayne’s Doctor Who-esque portrayal of the young man in love with all kinds of fantastical animals, The Crimes of Grindelwald wastes no time in switching off the light and slithering into the dark heart of Johnny Depp’s exquisitely shadowy Grindelwald. Of course, without the first film you wouldn’t know who he was but now we find him caught by MACUSA (Magical Congress of the United States of America), imprisoned in mid-air (assumed under some super magic) and just as shifty as the first time we saw those crazy, intoxicated eyes.

Without wasting time, the film’s opening sequence is Grindelwald’s escape from the clutches of the law with a colossal chase sequence across the skies. Initially it’s all a bit overwhelming, like you’re thrown into the middle of a Dementors chase, because of the scale and it took me a moment to adjust my mind to what was going on. After that, we learn of his plan to gather followers, some of which have already moved to his ‘side’, as he plans to raise pure-blood wizards to rule over everyone non-magical, of course! The classic evil intention.

After this, young Dumbledore, played superbly by Jude Law, enlists Redmayne’s Newt to try and stop Grindelwald as he feels he’s the one person who really knows what he’d need to do to thwart the evil. There’s a LOT going on here, and it happens quite fast. My minor issue with ‘Crimes’ was the extreme jump from the lighter touch to the evil lurking within. Almost as if we skipped from the Philosopher’s Stone to the Deathly Hallows without an inkling and, because of this, I had trouble clicking into the narrative swing. In retrospect though, which is realistically how all films should be judged, I think a sitting of the two would work perfectly, especially as it would balance with those astonishing finale scenes with Ezra Miller‘s hugely important Credence and all the power he comes with. 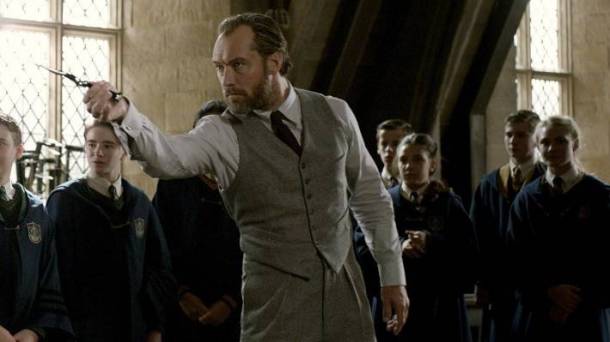 Also, for me, some relationships weren’t as necessary this time and seem strangely disconnected compared to the first film. A prime example being the relationship between Alison Sudol’s Queenie and Dan Fogler’s Jacob, while the first film took a long, lovely time getting them together, now it’s instantly destroyed. You wonder if Jacob was kept on board for a comedy element but they also miss out on that potential, which was disappointing. On the positive side, the chemistry between Tina (the returning Katherine Waterston) and Newt (Redmayne) is wonderful, as is Zoe Kravitz’s Leta Lestrange and, of course, Law as a younger, just as secretive, Dumbledore.

Fantastic Beasts: The Crimes of Grindelwald is a huge film, with themes of family and loss in many respects. We’re also given more of the teased history between Dumbledore and Grindelwald (Tip: Do recall the back of the chocolate frog packets from the beginning of all of this) and holds all the hallmarks of setting up for a huge finale that’ll surely even the entire trilogy out.

By the way, watch the extras, especially the scene watch with Evanna Lynch and Ezra, that’s epic, you’ll also want to check out the Extended Cut with Deleted Scenes.

2 thoughts on “Fantastic Beasts: The Crimes of Grindelwald Blu-ray review: “A much darker, exquisite slither of the Wizarding World””