Based on David Grann’s 2003 The New Yorker article, which in turn was built from the real-life tales of career criminal Forrest Tucker, The Old Man & The Gun is a real smooth, Sunday afternoon-type crime comedy-drama that will undoubtedly charm a ‘silver’ audience, due to the lead cast of Robert Redford and Sissy Spacek, but that age assumption would also do a huge disservice to David Lowrey’s wonderfully charismatic film that anyone can embrace.

Starring the legendary Redford as Tucker, in what’s rumoured to be his last role, he plays the part with such ease and aptness that it’s hard not to be won over by this ‘most true’ story of an extraordinary criminal, who you’ll end up pretty-much loving. You see, Forrest Tucker was in and out of prison from the age of 15 but mainly because he was so good at escaping from them. It’s a fascinating story in its own right but Lowrey’s version mainly concentrates on his later years, with flashbacks to fill in the character as the story builds. 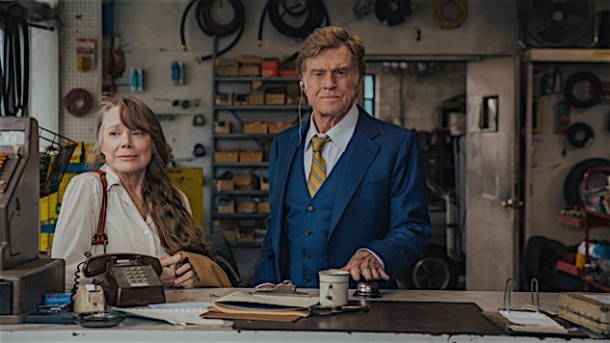 In this account of the adventure, we join Tucker holding up banks and in his 70s but with such a panache that you can see why his approach has worked for so long. He’s joined by the ‘Over the Hill’ gang of Teddy (Danny Glover) and Waller (Tom Waits), both great, who become a little bored with simple robberies and just taking cash from the tills, and so the trio begin to plan a heist beyond their usual boundaries.

On the flipside of this, and while he carries on robbing banks alone, he meets Jewel (Spacek) when her car breaks down and falls for her instantaneously, and thus begins a friendship with the essence of distant hope for a different life somewhere. However, despite his good intentions, it’s clear that Tucker is embedded with the need to be a criminal and even after telling Jewel directly what he does, she doesn’t quite believe him. But, saying that, she’s not convinced that he might not be either.

To add to this caper, he’s also being pursued by Casey Affleck’s detective John Hunt, a man with a happy home life, who is as committed to his Police work as Tucker is to crime. This relationship reminded me of Al Pacino and Robert De Niro in Heat (without that extreme intensity) and while The Old Man & The Gun certainly doesn’t echo that film, it could be the mellow cousin of Michael Mann’s mini-epic, as their relationship grows from two very different perspectives. When they actually do meet, it’s magic and bridges the gap between the old and new, but you’ll have to watch to see what happens.

Lowrey’s film is almost unsettling that it wasn’t made in the era it represents, with so many small details to create the full picture; you pretty much accept this is the early 1980s. Overall, it’s Redford and Spacek who light up the screen with every scene, their chemistry is natural and their talent for telling a story and creating a compelling character is beautiful to watch as it unfolds.

Much like Redford’s character who just loves what he does, you’ll fall for the twinkle in his eye in every moment he puts himself through, whether that’s the chase of the Police or the conversation between him and Jewel. The Old Man & The Gun is unusually charming, suave and curiously calming but, equally, holds a consistent captivation in which you end up watching with a content smile on your face from start to finish.

The Old Man & The Gun is available on Digital Download, VOD and DVD now. Buy it here: https://amzn.to/2K4aOh0

While I was saddened there isn’t a Blu-ray release, the special features on the DVD are huge! Check out the chat between Redford and Lowrey especially, and here’s a full rundown: