This is massive news, and I can’t believe it’s already been 20 years, but 2020 will see the mighty David Gray hit the UK and tour his breakthrough album White Ladder to celebrate the anniversary! And, he’ll stopping by at The O2 on 26th March, I cannot wait!

Gray has had a huge influence on my life since that album, which continues to this day with all his album since. If you were one of the millions who let White Ladder into your heart and soul, then you’ll also know that this was his fourth album, he was out on a limb and even – in some regard – losing the love for the industry that’s often known to take you in and shake you off. Thankfully, after challenging himself “Can you make a better record? Can you write a better song? The decision was to open up and give it everything I’ve got“, this album was taken to the hearts of millions and after huge success in Ireland, it found its way across the pond and has remained an absolute classic since its release.

Tickets go on general sale this Friday 11 October at 9am and are available at theo2.co.uk or by calling 0844 856 0202 – For all other tour dates, visit DavidGray.com to find dates that cover the UK and Europe for you.

Multi-platinum, multi-Brit and Grammy-nominated, British singer-songwriter David Gray’s White Ladder sold over 7 million record and it truly is one of the most heart-warming word-of-mouth successes in music, the album will be performed by Gray with all the original band members (Clune!!) and with all the original equipment to recreate the record in its entirety, plus a set of the greatest hits to throw in for good measure.

That’s not all either! Because, YEEES VINYL, an expanded 20th anniversary edition of White Ladder will be released on 2xCD, 4xLP, and digital formats. This will include a special remastered edition of the iconic album plus White Ladder era previously unreleased rarities, B-sides and demos. Physical versions will be accompanied by an extensive booklet with writings by Gray about the whole White Ladder experience – from the people involved, to the stories behind the songs and memorable shows. 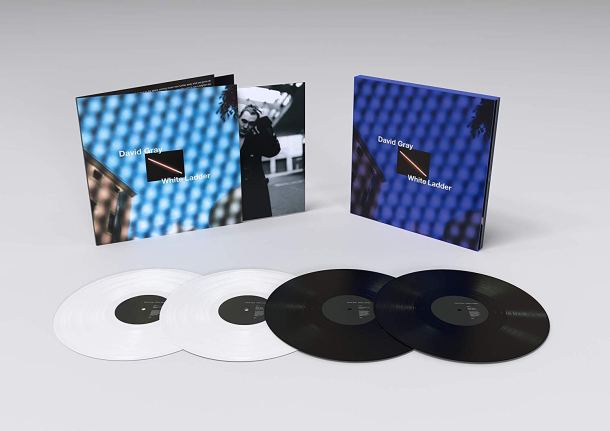 Talking about the announcement, Gray had this to say:

“It’s the 20th anniversary of White Ladder, a unique record with its own remarkable history. Jammed full with big, open hearted songs and flooded with a raw emotional energy. It’s an album that came from nowhere to steal the hearts of millions all over the world, completely transforming my life in the process. Twenty years on and it feels like White Ladder is just as alive for people now as it was back then – so to celebrate this milestone, I will be releasing a special anniversary version of the album and assembling all the original band members with all the original equipment, in order to take White Ladder out on the road and recreate the record in its entirety.”

Written and recorded on minimal budget by Gray in the bedroom of a tiny terraced house in Stoke Newington, David experimented with drum machines and electronic elements, creating a blend of folktronica that has since become a familiar part of the musical landscape, aided by drummer Craig McClune and engineer Iestyn Polson. Self-released at first on his own kitchen sink label, White Ladder slowly (very, very slowly) found an audience. It took a year to creep into the lower reaches of the British charts, then worked its way all the way up to number one. White Ladder eventually spent 3 years (from May 2000 to March 2003) in the UK top 100, spawning classic hit singles ‘Babylon’, ‘Please Forgive Me’ and ‘Sail Away’. It remains in the top 30 best-selling British albums of all time and the best-selling album ever in Ireland (a nation who know a good song when they hear it).

“What happened with White Ladder involved more than music. It was a sort of heart and soul moment of total surrender for everybody involved, for me and the audience. That was it. It doesn’t get any better than that.”