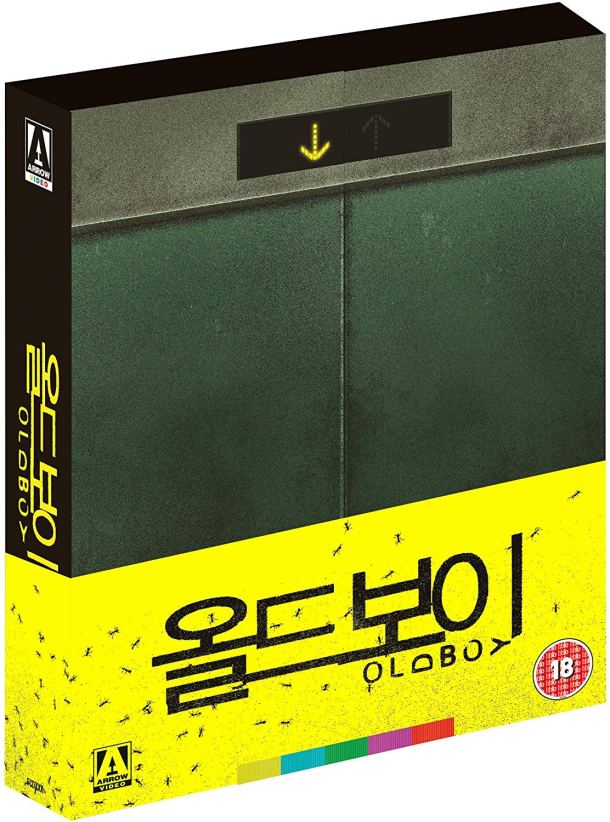 There are few films over the last 20 years that have proven as provocative and iconic as Park Chan-Wook‘s masterpiece, Oldboy. A visceral, lean, shocking revenge thriller, it was immediately controversial on it’s release, and as this 4K restoration shows, it’s still full of surprises and has lost none of it’s bite in the last 16 years.

When he is abducted and held prisoner for fifteen years, Oh Dae-Su (Choi Min-Sik) is released into the world without any explanation for his incarceration. He is given new clothes, a phone and a wad of cash, and is challenged to uncover the identity of his captor, and the reason for his imprisonment. Oh Dae-Su rampages through the criminal underworld only to find that the answer is a lot closer to home. 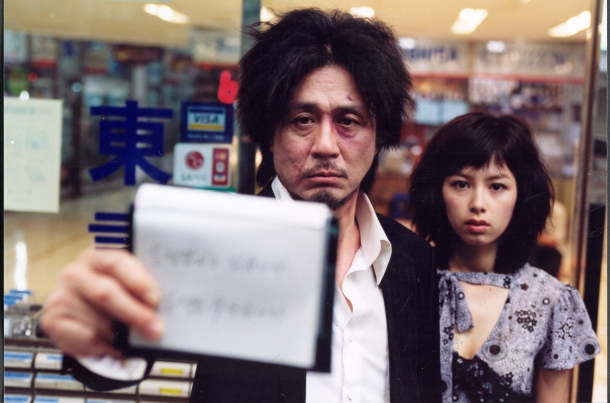 When talking about Oldboy, it’s tempting to just mention the iconic moments – the octopus eating scene, the numerous instances of graphic torture, the tour-de-force of fight choreography – all of which are rightly lauded. Upon a rewatch though, especially in this stunning 4K restoration, you are reminded just how beautiful a film it is.

Park Chan Wook can be guilty of letting his sumptuous style overwhelm the narrative (Stoker is especially guilty of this) but here he gets the balance just right. There are little flourishes that border on self indulgence, but it all serves the story and it looks amazing. The framing is always perfect, and every shot is meticulously constructed. It’s helped by a beautiful string orchestra score and some excellent editing, and the way all of these elements are used together informs the storytelling perfectly. The scene where Oh Dae-Su visits his old school and steps into the past is edited seamlessly, as the old and young versions of the character repeatedly and fluidly switch places. 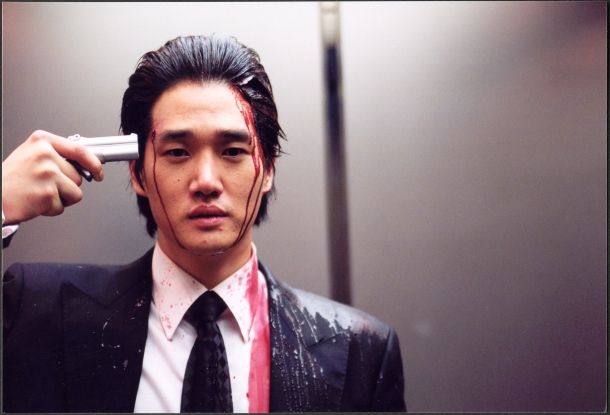 The film is also a lot funnier than it needs to be, with the introductory scenes being both genuinely funny and serving as a masterclass in economic storytelling. Even the iconic hallway fight scene is darkly comic. Everyone remembers the spectacle of the scene, the staging and the virtuoso single shot, but it’s the absurdity of the fight that makes it so memorable; the way the baddies get visibly exhausted and their bravado disappears as they realise the odds are against them, and the way it seems to never end!

If I have one criticism of this transfer, it’s that the subtitling isn’t great. The translation seems to have been done anew along with the restoration and some of the new dialogue lacks the bite of the original translation. There are also a couple of very basic grammatical errors that really should have been picked out, and one crucial line of dialogue that is repeated a few times. It’s especially egregious on a re-release like this, which is more for fans of the original than anything else.

This is a shame but it doesn’t detract too much from the overall experience, which is still breathtaking. The subject matter may be brutal but it’s all directed with a lightness of touch that prevents it from being too grim, and makes it incredibly rewarding on repeat viewings. The scrip is also full of foreshadowing with every line holding significance for later in the film. Devastating, funny, beautiful and horrifically violent in places, Oldboy is the quintessential extreme Asian film, a genuine masterpiece, and the perfect gateway to Korean cinema. 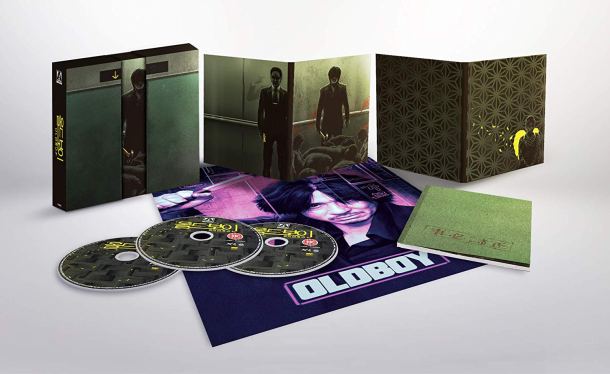 If the Arrow Video‘s incredible 4K restoration of Oldboy wasn’t enough, Park Chan-wook‘s seminal revenge thriller now comes in what might be the perfect package, with a lush 4-disc limited edition boxset, accompanied by a slew of incredible special features.

Old Days, the feature length documentary on the making of Oldboy, is the perfect example of how to make something like this entertaining. It’s informative and entertaining, featuring contributions from Park Chan-wook, producer Syd Lim and lead actor, Choi Min-sik, as well as many others. It’s an incredibly in-depth look at the making of the film, taking apart some of the most memorable scenes in the most specific detail. Chan-wook is incredibly modest and candid about his breakout film, he talks frankly about what he felt worked and what didn’t. The behind-the-scenes footage is also great, it conveys the very real budget struggles the production team faced and the physical toll filming took on the cast.

The special features for the main event are also insightful and honestly a lot better than they needed to be. The commentary from writer Simon Ward and former Midnight Eye editor Jasper Sharp is really interesting if your an Asian cinema nerd (Which I obviously am) and the commentary by Chan-wook and the lead actors clearly shows that everyone involved in production still has a huge amount of affection for the film. Asian cinema guru Tony Rayns makes an appearance in a short appreciation video of the film, as well as the usual package of deleted scenes, behind-the-scenes material, trailers and an image gallery.

However, the real treat here is the inclusion of the rest of Park Chan-wook’s Vengeance trilogy. Lady Vengeance is an operatic, sumptuous revenge story, and Sympathy For Mr Vengeance surpasses even Oldboy in its brutal nihilism. It’s a film that’s simultaneously meditative and incredibly violent, smaller in scale but more intimate and personal.

This release is comprehensive and stunning, and the perfect companion piece to Arrow’s restoration. Featuring all three of Park Chan-wook’s Vengeance trilogy, a host of special features, this is a proper treat and the beautifully designed packaging is an argument for the continuing existence of physical media on its own!

Oldboy is out now on as a Limited Edition 4-disc set, order here: https://amzn.to/2Mv73yQ or as a Special Edition 2-disc set: arrowfilms.com/oldboy-setwo from Arrow Video. 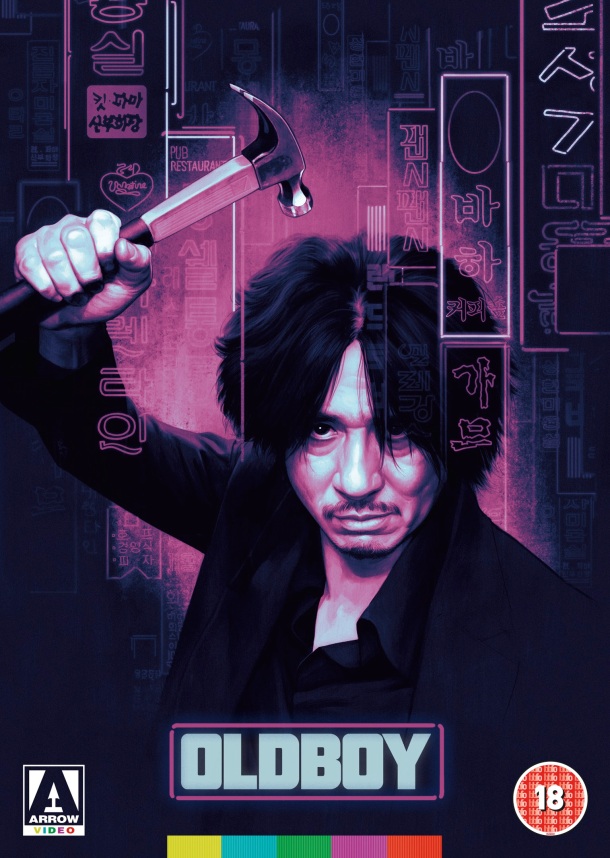