After four years of waiting, the highly-anticipated adaptation of Philip Pullman‘s His Dark Materials trilogy has finally journeyed across multiple worlds to the BBC and HBO. It’s the most ambitious production the BBC have ever embarked on, and based on this first episode (adapting Pullman’s first novel, Northern Lights), we’re in for quite a ride.

The episode opens with a short prologue taken from Pullman’s prequel novel The Book of Dust: La Belle Saevage, as Lord Asriel (James McAvoy) drops off a baby Lyra and Pantalaimon to the Master of Jordan College. It’s a vague, mysterious opening to the episode, establishing a unique feel for the series – a mix of steampunk aesthetics, real-world influences and fantasy. It’s also fantastic to see Jack Thorne‘s teleplay build on the narrative of His Dark Materials through this series, not deviating so far from the text as to annoy fans but taking bits from other works to embellish the material and make it work.

After this, the rest of Lyra’s Jordan focuses on Lyra Belacqua herself, played by Dafne Keen. Keen’s performance is pitch-perfect as Lyra, never missing a dramatic or comic beat while also introducing an endearing but also a flawed lead for the series. I think what separates her from other fantasy leads like Harry Potter or Frodo Baggins is this important element, she feels like a more authentic character and less like an audience point-of-view protagonist.

Credit must also go to Lewin Lloyd as poor Roger Parslow. He manages to capture so much character in his few scenes and also displays a great comic timing, making his kidnap all the more upsetting. I would have been interested to actually see Roger’s kidnapping by the Gobblers but at the same time, I do appreciate the idea of building the mystery over several episodes. For now, it’s best to leave them as unseen people lurking in the night and this probably makes them even more scary for a younger audience.

The first half of the episode also introduces us to Lord Asriel, played by McAvoy, and it’s fantastic to see him play to his strengths in such a complex role. His interactions with Keen as Lyra are a joy to watch, with both actors holding their own against one another. McAvoy manages to convey so much through subtle facial expressions that will not only please fans of the books, but will also reward repeat viewings. He has such a presence and carries his big meaty “Dust” scene incredibly well. We’re also introduced to Ruth Wilson as Mrs Coulter in the second half of the episode, but I’ll come back to her, as she doesn’t get too much screen-time here. 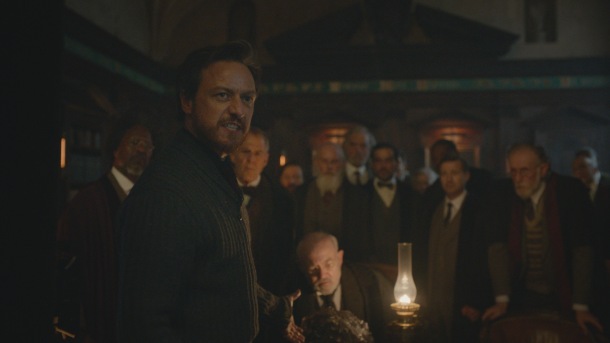 Naturally, this first episode also introduces the vital concept of the story: that being the aforementioned Dust. Dust is an important element in Pullman’s His Dark Materials trilogy and whilst those new to the story may be confused to exactly what it is, here it’s woven in impressively – including a brief glimpse at Cittàgazze in the Aurora. There are already many narrative threads being established and I was absolutely blown away by the attention to detail from the creative team. Asriel’s speech, decrying the Magisterium and introducing the importance of Dust is highlighted without being over-played.

Unlike The Golden Compass film adaptation from 2007, His Dark Materials isn’t shying away from the obvious real-world parallels present with the Magisterium, with Asriel’s discovery described as “heresy” and the frequent mentions of “scholastic sanctuary”. The show makes no bones about it: the Magisterium are a sinister force, and one to watch out for. I’m aware that some people have slated Pullman’s novels for their supposed negative portrayal of the Church through the guise of the Magisterium (not that it’s particularly subtle), but for those concerned, His Dark Materials is less critical of religion as it is the lengths people in power will go to maintain their power, keeping their “subjects” in ignorance. It’s more of an anti-Bourgeoisie story than an anti-religion story and I’m glad that the BBC/HBO haven’t tried to downplay this element, as it was a definite failing in the film.

In fact, this is both a strength and weakness of Lyra’s Jordan. While it suffers from being the first installment in a series, and thus has to take its time to introduce everything; but it introduces everything so well that I can’t help but admire. Some new to His Dark Materials may not be sold on this first episode alone, but to those people I’d recommend sticking with the show. So far, it’s following the books very well, and if so, the best is still yet to come and despite the slightly overlong ‘next week’ trailer for at the end, there’s so much that hasn’t been spoiled in the marketing. 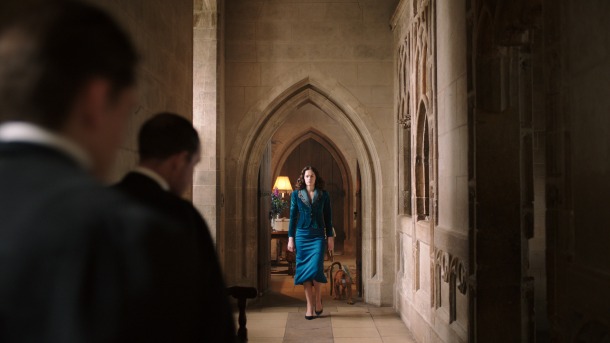 From a production side of things, Lyra’s Jordan is also very impressive. Tom Hooper directs the episode very well for the most part, although if I were to critique the direction, it would be in the handling of the Daemons. Often, Hooper frames shots in such a way as to leave the characters’ Daemons out of shot, which I find somewhat annoying. I can understand that this would save on the visual effects budget, but the Daemons are each characters’ soul and need highlighting in future episodes. Honestly though, this is very much a nit-pick, as the episode otherwise looks fantastic. The location work in Oxford is beautifully shot, and the visual effects are very well integrated with the live-action. The show seems to aiming for a slightly softer look than I’ve seen with some recent BBC shows, but the cinematography is nevertheless dynamic and gives it a big-budget look.

I’m not usually a fan of Lorne Balfe‘s musical work, but even I have to admit that he’s done an absolutely stellar job on His Dark Materials. The opening theme is incredible and the rest of the score really helps to create the mood of the series. Pullman’s novels, despite being family-friendly fantasy fiction, are actually quite dark and Balfe’s score maintains that feeling of unease and foreboding danger throughout. It’s quite Hans Zimmer-y in style, but works well. The title sequence itself is also littered with details, including what look like the Subtle Knife, Will Parry, and glimpses at some of the other worlds the show will explore as it unfolds. I’m definitely going to be watching it on a loop to catch even more details!

Overall, Lyra’s Jordan makes for an excellent start to His Dark Materials. It sets up its brilliant lead protagonist, the threat of the Magisterium, the revelation of “other worlds”, the mystery of the Gobblers and even teases the armoured bears of Svalbard. Honestly, I can’t wait to see more.