Nightmarish and blackly comic, Robert Eggers‘ follow up to his cult-hit The Witch is sure to be just as divisive. Less conventionally scary but just as disturbing, The Lighthouse is one of the most original and unnerving films of recent years, anchored by two utterly captivating performances.

The plot is essentially two lighthouse keepers, stuck together for an unspecified amount of time, slowly going mad. Thomas (Willem Dafoe) is an old hand, while Ephraim (Robert Pattinson) is an introverted novice, trying to escape a troubled past. Ephraim quickly grows to resent Thomas, who resolutely guards the light on his own, while he is relegated to the most menial tasks. As the pair’s relationship deteriorates, Ephraim starts encountering visions and has trouble differentiating what’s real from what’s not.

Both Dafoe and Pattinson give incredible performances and their dramatically different characters are reflected well in their contrasting performance styles. Pattinson is quietly intense and insular in his role, making his character’s descent into paranoia convincing and scarily plausible. He has done such a good job over the past decade distancing himself from the albatross of Twilight that was hanging around his neck. Roles in Good Time, High Life and Cosmopolis have rehabilitated him to the point where he can be taken seriously as an actor, and this moody, compelling performance has cemented that.

Dafoe is equally impressive, but in a broader, more colourful way. He manages to make his character simultaneously imposing and vulnerable; friendly and irascible; comic and sinister. It’s a tricky balancing act, and we’re never entirely sure if he’s telling the truth or spinning a yarn. He is utterly magnetic in his role, in one scene giving a disquieting two-minute speech without even blinking, and in another delivering a monologue in an agonisingly long, unbroken close-up while covered in dirt.

Shot in 4:3 aspect ratio, The Lighthouse instantly recalls classic cinema, and clearly owes a huge debt to European silent films; there are references or homages to classics like Sunrise, L’Atalante and Ordet as well as German Expressionism in general. Tonally though, this is reminiscent of David Lynch, specifically Eraserhead and one particularly disturbing episode of Twin Peaks: The Return.

The overall impression is that of a waking nightmare, Eggers borrows liberally from numerous sources to convey this in his depiction of paranoia and madness. The work of Edgar Allan Poe is a major influence, as well as specific paintings, Greek mythology and all manner of seafaring legends. The story of Prometheus is a major touchstone, as Ephraim covets Thomas in his puritanical hoarding of the light. Eggers combines the absurd with the horrific throughout, so nightmarish imagery is coupled with a comic scene or a bit of slapstick. (Not limiting himself to highbrow sources, Eggers even references The Big Lebowski in one scene)

Acting as a contrast to this is the strikingly beautiful black and white cinematography. For the most part dark and murky, making the most of silhouettes and shadows, the hard cuts to daylight are stark and almost blinding. Equally responsible for the mood is the score; part industrial, part orchestral, with even choral voices all contributing to the ethereal mood of the film. Reminiscent of The Elephant Man, or Neil Young‘s score for Dead Man, the score is blended expertly into the atmospheric sound editing, which uses the sounds of foghorns and deafening heavy duty machinery to jarring and disorienting effect.

While not as scary as The Witch in it’s subject matter, The Lighthouse is a lot more subversive and disturbing in its execution, getting under your skin in a really unsettling way. Both actors are perfect in their roles and deliver two distinct, but equally impressive, performances. A unique, instant cult classic that will leave you contemplating its meaning for days after.

The Lighthouse opens in UK cinemas on 31st January. 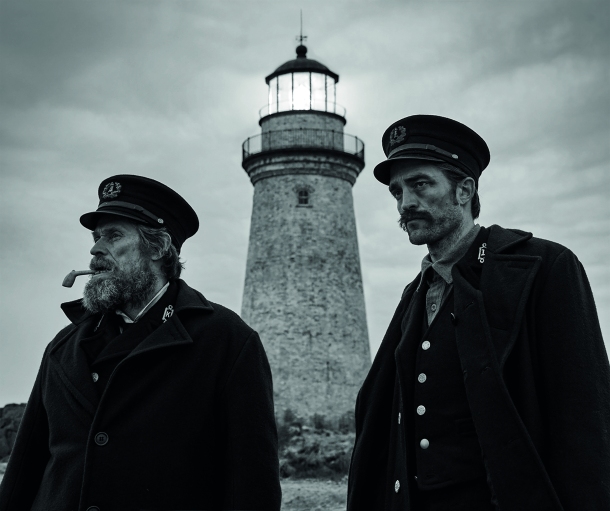