This weekend Critical Popcorn travelled up to enjoy the delights of Pylewell Park in Hampshire and our first visit to the Curious Arts Festival from Friday 21 July to Sunday 23 July. We camped (and saw that Glamping was also available if you fancy it) in both the brilliant rain and sunshine. Check out my review and photo gallery below! 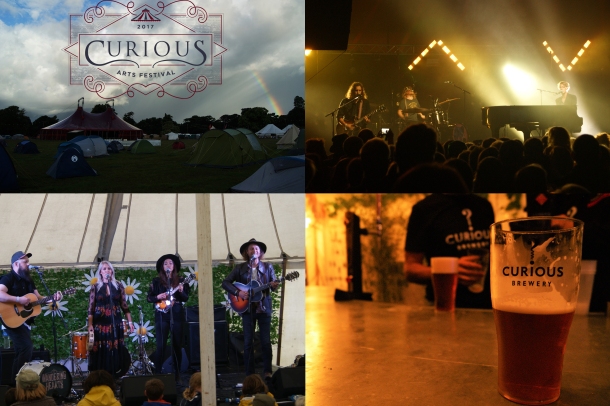 This was Pylewell Park’s Curious Arts Festival 4th year running and it’s clear that they’re growing in both reputation and size every year, whilst still keeping focus on being a boutique festival that offers its audience newer music, a huge range of authors, alongside independent traders plus a good selection of health and mindfulness events. Where it succeeds is on the positive, friendly side this their wide range of talks and sessions throughout the day, even during the rain that scattered in and out on a regular occurrence, but it needs a few tiny adjustments to make it even closer to perfect in the years ahead.

In truth, beyond a few minor quibbles that I’ll come back to, we had an absolutely enjoyable time at the festival after heading up from Devon for the first time. The idea behind the festival is to experience something a little unconventional, or curious you may say, and I was very eager to see what they could offer in the ever-expanding world of independent summer festivals. Overall I loved the setting, which includes distant views at the end of the estate across to the Isle of Wight, and the utterly positive nature of everyone working there, I don’t recall seeing any problems at all with staff or fellow festival-goers across three days of adventure. If you love a good author or expert talk as well, then you’ll definitely find a lot to listen to and get a chance to ask your questions. They had a good range of alternative and folk-like music, which are both my first love, so it was fun discovering new bands. I haven’t got kids but it looked like there was a good range of things for them to do from various adventures, crazy golf, and events starting from 9-10am and through the day as the kids always appeared to be occupied.

An early morning Rainbow over the site…

Friday night kicked off with the very lively and energetic Ibibio Sound Machine, who offered up a funky, dance set to help the crowd get into a party mood, which was especially welcome after the severe rain through the day and the amusing tent-fight almost everyone had in rather difficult weather conditions. Following them was Seramic, a ‘new project’ from Marcus Foster who I knew nothing about beforehand. His set and band offered up a Jack Garratt-like exploration of funk and alternative experimentation but, truth be told, very accessible to a crowd of varying tastes. He’s been compared to ‘Prince meets D’Angelo’ and you can definitely get a sense of that with a smart sound. After a few more drinks in the main festival bar, I headed over to a bit of comedy and especially the unique, strange and amusing talent of Murray Lachlan Young, who told stories and poetry. A talent to be intrigued by for sure.

Saturday kicked off with Paul Blezard and editors from The Week, a magazine that dissects the day’s national and local news, and was highly entertaining. Much like a good Radio 4 talk show, both topical, funny and interesting through and they even said we wouldn’t talk about Brexit, which brought a loud cheer across the busy tent. After another walk around, I stumbled into Maggie’s Tent and the glorious introduction to The Wandering Hearts, an alternative Americana/Folk 4-piece from the UK who offered up beautiful harmonies with their very catchy, finely tuned sounds – Their debut single came out last week and I’m already a huge fan. They even had a daytime encore, which might be a first, and the shout of ‘Lock In!’ from member Tim Prottey-Jones that was rather entertaining! I also really enjoyed, and was inspired by, a great talk with author Matt Haig who spoke about his previous depression, how Reasons to Stay Alive came about and even an insight on how he writes, many things echoed things in my life so picking up a signed copy of his new novel How to Stop Time was a wonderful, unexpected highlight.

Then, once Saturday night came around, we were treated to three of the finest bands, withdifferent sounds, one-after-the-other in a long while. Opening the night was Júníus Meyvant, an Icelandic front-man with a band and a very unexpected groove through a funky set that evoked some of the classic 70s chilled-funk with his own twist. He also was a very funny lead, asking the crowd ‘Who’s been to Iceland?’ and after various people cheers asking ‘Why?’ to much laughter. London’s Whoredogs were up next with some classic overs, including the lead singer of The Duke Sprit, John Niven and then John Illsley, the bassist with Dire Straits, really picking up the pace of the evening with Sultans of Swing (a personal all-time favourite) and Walk of Life, it was immense to hear those songs live and sounding so good still. 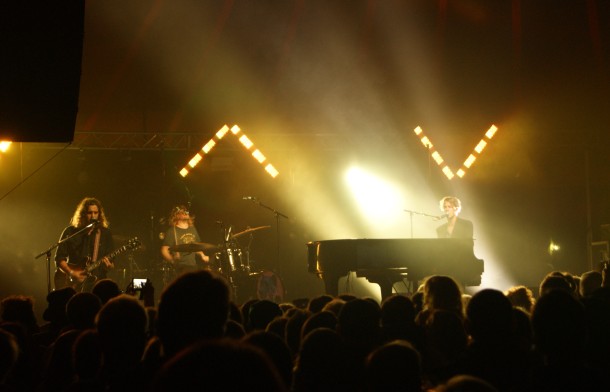 Tom Odell and his superb band

Finally, the most unexpected mighty headliner came from Tom Odell, who was an astonishing live act with a passionate, piano-rock live experience, a ground-shuddering bass fuzzing through, and Andy Burrows on drums offering up a Glastonbury-headline-act-deserving performance. It’s been a while since I’ve seen an act put on such a powerful, winning show and especially as I was only half-versed with his work. There was also a wonderful couple of songs with special guest Birdy, who brought her usual beautiful, melodic sound to proceeding as they played a new song they’d written together. The whole set was ridiculously impressively and eventually helped the party go long into the night at the main bar with some classic dance-along hits to keep the atmosphere high, much like one of the finest wedding after-parties you’ve ever been to.

Other good moments were the Edward Goldsmith, the famous environmentalist, discussion, with Bron Taylor, Helen Scales, Valentine Warner and Tony Juniper as they talked about the anniversary of the The Way, a book published in 1992 that ‘attempts to explain the self-inflicted problems facing the world and to propose a way out of them’ and still very relevant today. You’ve also got comedy from the likes of Ed Byrne, George Egg, Simon Evans and more.

Quick food shout out to Mai Taiko, Purbeck Ice Cream and the hosts very own Curious Beer, by Chapel Down, who were all rather great!

The only issue with any festival, not just at Curious, is trying to find a loop in space and time, so you can do it all simultaneously,  because there was a point I could definitely could have been in every tent on numerous occasions, especially on the Saturday.

Despite the rainiest Friday of all-time, the site was still managed really impressively, especially as people were arriving to camp throughout the day. With it all being in very large fields/grounds there would have been danger of mud-problems but it just didn’t cause any trouble at all. There was the added bonus of a huge main-tent, the Gorse Stage, which meant every headline act was undercover with the constantly changing weather but maybe some of the smaller tents could have had the hay ‘seats’ removed because space was limited, especially due to the random rain showers!

If camping, the setup for some parts was a bit odd and might need a reshuffle as they move forward year-to-year because although offering such luxuries as showers at a festival is magnificent, they were in the middle of everything, instead of one side, and could have benefited from being closer to the campsite. We arrived early and so were close to the portable toilets but if you were further down the large field, it’s a bit of trek to get to them. But this is a small issue in an otherwise well organised site, especially as they were constantly being cleaned and restocked with all your loo needs. There was also a mention of ‘water points across the site’ but in truth there were only a few and more-or-less in the same place. These could do with bigger signage and maybe even more because, again, everything was on one side. This could have been a logistical decision but maybe something to consider in the future. I also think they could have had a few more cake-type food stalls, just because the coffee/cake ones were so popular!

Finally, I felt they could have utilised the main stage a little more, with Sunday having the amazing choir event – something anyone can sign up for – and then after some great talks the Royal Philharmonic Orchestra outstandingly playing the themes and songs from James Bond but big gaps between 4pm – 8pm which could have had a few more acoustic-type acts to offer up a more leisurely Sunday vibe.

Absolutely. While they’ve got literal, and suggested, room for improvement and expansion, I cannot fault their passion and commitment to a really positive, forward-thinking festival. Personally, I don’t always want to go to an event where I know everyone I’m going to see, or everything that could happen, beforehand. These days and weekends out should be about discovery, excitement and surprises, and the Curious Arts Festival provided all of these things with a lot of heart and genuine warmth.

Check out their website for more info, and to keep an eye on details for next year: curiousartsfestival.com 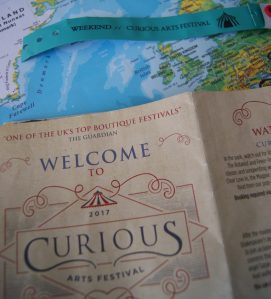 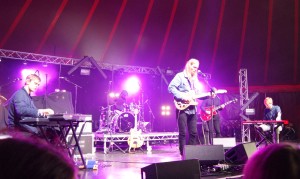 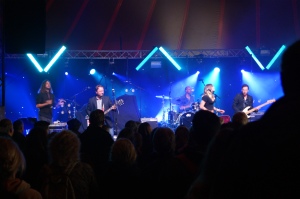 Whoredogs and the Duke Spirit

The wonderful The Wandering Hearts 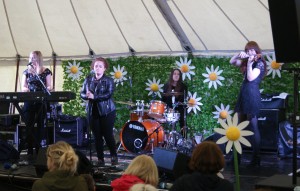 To the Isle of Wight…

Coffee… all the time 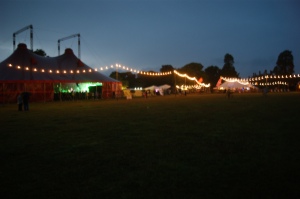 And the festival closes…