Over the past few years PC gaming changed. Independent developers had a new way to release their unfinished games to the general public in a way similar to crowdfunding, where gamers can purchase an Early Access version on the Steam gaming service webstore and play everything currently available, and even own the final game when the project is completed down the line.

Currently in an alpha version, Foxhole is one such release and has been around for the better part of a year allowing gamers the experience of participating in a fictional World War II style conflict between groups called the Colonials and the Wardens.

The campaign tasks the two sides to fight over multiple maps conquering each town in idealistic European countryside settings as they push towards the enemy’s headquarters in the gaming equivalent of ethnic cleansing. The map is won the moment the final spawn point (town headquarters) is captured and the enemy unable to produce items to fight on. 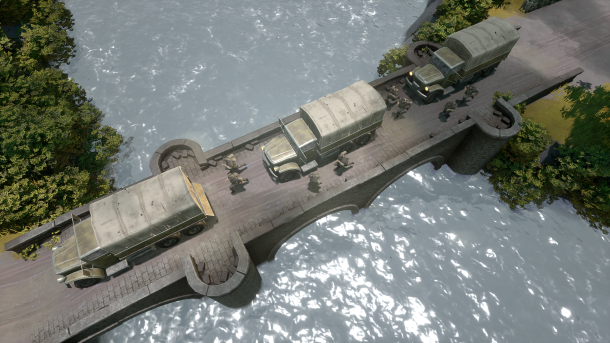 Foxhole utilises a persistent online world means each server continues the battle 24 hours a day until the final victory is won with players in countries around the world pushing the front at all hours of the night. Log-off after a six hour session one day and the next morning the world will look completely different.

Players create not just the battle but the game world itself. Apart from the fixed basic greenery and buildings which load when the server starts it’s up to the players to build all the items of warfare. From walls and gates to gun emplacements and tanks. Each battle is unique and relies on support players to litter the countryside with foxholes and barbed wire.

Where most top down war games are strategy titles, Foxhole puts the player in control of a single soldier and lets them create their own life. A soldier can run to the fight line, pick up a gun and head into battle to live a minute then respawn or, instead, take the role of a supply truck driver or a materials miner. Every gun, bullet and tank is player built. From mining the materials they have to be taken to a building, refined, weapons crafted, delivered to the front and then finally used by the meat grinder. This takes time from minutes for the materials to be turned into useful items of war, to the initial work of the sole miner who stands alone harvesting scrap to provide his team bullets.

Hours of gameplay can be had for a support soldier and entire gameplay sessions without ever seeing an enemy soldier and still remaining invaluable to the war effort. Thus is Foxhole, a game where it relies on the goodness of players who know team play and victory comes not from the front but from the supply line behind it.

But this is both a benefit and a curse. As a game impossible to work in any sort of offline mode, each campaign session relies on the more than 100 players on the battlefield to think for others and not themselves. In a lot of cases this occurs with players driving transport trucks to the front and acting as quartermaster directing supplies. Where in other sessions players will quit a losing team, refuse to mine and instead shout and scream in the text chat-box and over microphone demanding goods they refuse to work for themselves.

Vehicles and weapons available are directly associated to the teams unlocked technology level, which is increased by miners delivering randomly dropped parts they collect to a vehicle or weapon factory. Without players acting as miners higher level items like the hugely valuable tanks and tank shells may never be seen before a match is over. This also creates new variations on old battles as while an advance in a tank may be seen in one session destroying gun emplacements with ease the next round with no tanks will make those same emplacements feel like gods themselves. 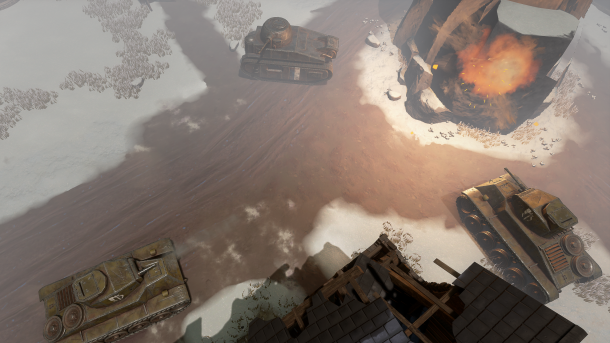 For Foxhole’s development unlike a lot of Steam Early Access titles there are clear signs of active development and progress on new features for continuing players. Over the past six months new maps, vehicles and weapons have been added with the ability to travel across water in new vehicles the clear highpoint.

The controls are simple to use and harder to master with a quick visual pop-up when joining a match displaying the basic controls. For use of certain items like gun attachments or fixed emplacements, it takes a little more time before it becomes second nature in the heat of battle.

The audio is heavy on the sound of gunfire, hammering and team chat with most players who can utilising microphones to speak directly to those around them. It’s possible to join a squad, issue orders when promoted or just talk to the common man via text-chat so no-one is feeling left out.

In its current state Foxhole is a fully functional and fully loaded game of war which cannot be recommended enough. There are some normal online only issues to watch like player count in the future but even if development were to stop tomorrow, there’s enough content to keep any purchaser very happy for as long as the servers are active.

For more info, head to: foxholegame.com