If you’ve ever seen one of those ads that encourage you to ‘Build Your Own [insert awesome thing here]‘ and wonder what it’s all about, well, I’m here to take up the challenge! It helps that I’ve a huge love for Back to the Future and so building my own DeLorean was too good an opportunity to miss. With Parts 1-59 already done, we move on with the next 11 [eleven] in one handy summary post.

Although Eaglemoss work around a monthly subscription, I’ve found that putting more parts together in ‘bulk’ can be more fun. This is mainly because some Parts can be done rather quickly and if it was week-to-week, you feel better when there’s a lot more going on. It feels like better value if anything.

Last time out we were really getting a genuine taste of progress. While there’s always progress in truth, it’s only when you step back and look at the bigger picture that it really feels satisfying. With the likes of the steering unit, wiring and – GET ON! – lights, the previous sections are something grand to behold but this section ups the ante once again with the car roof, which arrives in a huge box because it’s a solid beast.

As you can see below, along with some tiny latches that will, eventually, form part of the door structure. Once you’ve got these in place, have I said patience before? You’re onto adding the front windscreen and a tiny rear-view mirror complete with a tiny ‘proper’ mirror to put into place: 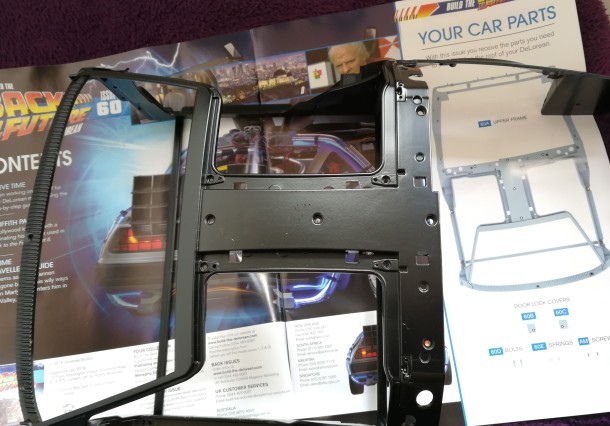 The huge Part 60, if a large box turns up…this is what you’re opening… 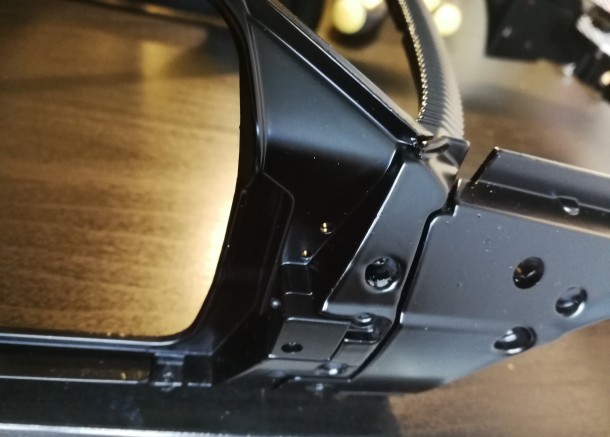 Plus time to get some door latches in there…

A nice plastic front windscreen, and rear-view mirror that clicks into a space – be careful!

Following this, you’re onto the front car bonnet (Or Hood in North America), which also contains the connections for a small light inside, plus the ‘boot’ (or trunk in NA) which is obviously in the front for the DeLorean, instead of the back. While you might, at first, think the arms aren’t strong enough to take the weight of a surprisingly sturdy silver-brushed bonnet, they do a decent job. I’d assume they made a decision it could handle the pressure, and still look convincing.

During all this, you’ll also be putting in a few more wires, cables and door locks. Amusingly, amongst all the wires, one of the most annoying things I find are actually the tabs to keep them in place. They’re not quite the right size but do half the job, maybe something to adjust in the future? Anyway, as a whole, check out the sequence below:

.. and your connections underneath

Once you place the inside in

Finally, we’re getting the first door in place, with window/half-opening window, wing-mirror and other bits and pieces. With these doors, you’ll be wiring in a few lights on both (as also seen in our post next week) and also a very simple three-cog connection so you can open the bottom half of the window, as seen below. What’s nice about the doors is they’re nicely inclusive once you screw in the ‘real’ inside of the door. They slot in easily and a real mirror within the wing-mirror sets it off impressively.

Something I really recommend is sellotaping down the bonnet before you start screwing in the first door into the upper frame. These little things help quite a lot, and do the same once you get the door into place. Again, like the ‘hood’ connections, the arms seem somewhat puny compared to the weight of the door itself but… it does work, after all this isn’t a toy despite the amount of work going into it. It’s a hell of a model and it’s looking absolutely awesome once you fit on the top half on everything else you’ve done so far – so below!

I haven’t screwed the top frame onto the bottom, but you can place it over it once you get to this stage. It’s also fun to try out the lights again, if you fancy it! 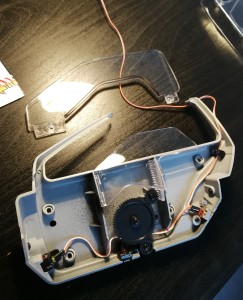 In the inside is a nice little structure, more on that in the review

The second part getting it together 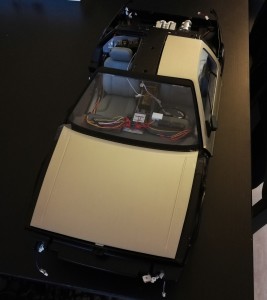 Not attached, but it now fits on top nicely

If you want to sign up now to Build Your Own Delorean, from Eaglemoss and Universal, it really is simple to get involved – Also, follow my blog along the way as I endeavour to prove that anyone can do this and rewarding.