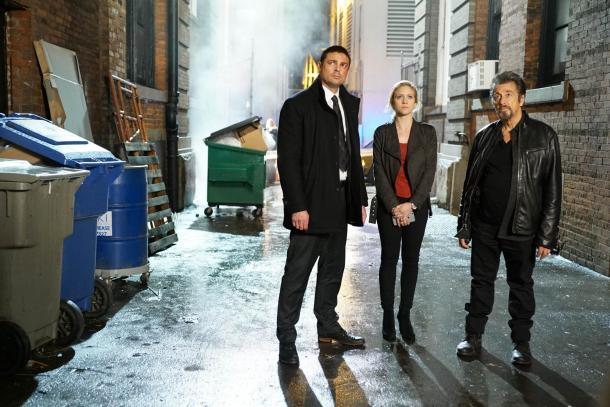 Ever get the feeling that Hollywood is running out of ideas? Truthfully, we don’t think it is but every now and then a film so laborious and underwhelming arrives that it rocks our faith in the Hollywood system, forcing us to question everyone involved for their lack of imagination.

Hangman is very much like the titular game itself – a barely comprehensible sprawl of incomplete words and shoddy drawings. Retired detective Ray Archer (Al Pacino) is pulled out of said-retirement by his tough as nails partner Will Ruiney (Karl Urban) when a brutal serial killer starts murdering people in a manner similar to the children’s game of Hangman. Leaving a hangman game at the scene of each crime for them to solve, the two detectives (along with Brittany Snow as the plucky reporter along for the ride) set out to bring the killer to justice.

Make no mistake, Hangman‘s plot is about as bobbins as it sounds. An overly-convoluted mystery which offers next-to-no red herrings or suspense, it’s a film instead content to exist as a mere series of Se7en rip-offs. A loosely connected set of gore-soaked sequences are loosely strung together by scraps of a plot – a plot with no comprehensible narrative or sense of pace, we hasten to add. 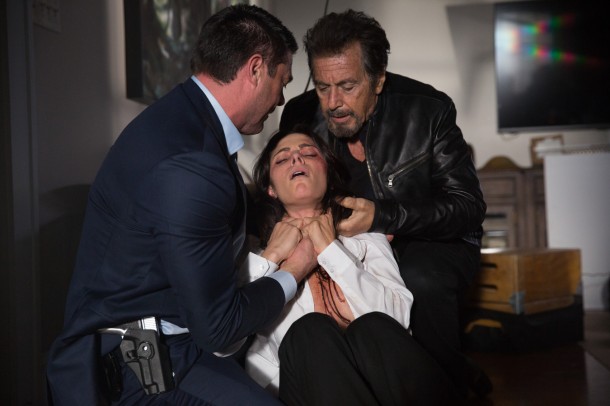 It’s a film that treads every tired, hackneyed cop-drama trope from the past twenty years or so, so much so that it oft comes across as a ill-considered TV Pilot as opposed to big feature film. The direction is by-the-numbers, lacking any real sense of verve or excitement, especially in the more explosive or violent moments. Likewise, the performances are pretty uninspiring – both Urban and Snow struggle to inject any life into their two-dimensional characters, whilst audiences will undoubtedly spend the majority of the film trying to guess what accent Al Pacino thinks he’s attempting!

The biggest crime here is the awful climax, consisting of a rushed collection of monologues and chases, which all lead up to an explanation that serves as the worst kind of deus ex machine we’ve ever had the terrible misfortune to witness. And don’t get us started on the stupid final twist, a shameless and undeserved attempt at sequel-baiting if ever there was one!

Make no mistake, Hangman is one of the most uninspiring, paint-by-numbers crime dramas to do the rounds in years. A clichéd mess with not a hint of intentional irony or fun to go along with it’s absurd premise, it’s a movie that conjures up all the fun of an 88 minute game of hangman itself. Lacking in originality and any genuine creative flair, it’s definitely a few letters short of a full word.

Hangman is available on digital download from 4th June.