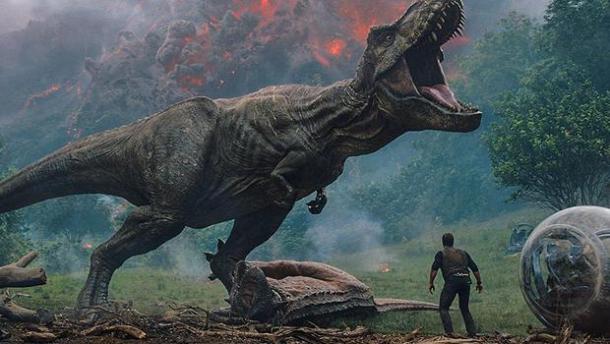 It’s been three years since we lasted visited Jurassic World and much has changed. The park is in ruin, dinosaurs roam free and the volcano Mount Sibo is on the brink of eruption, threatening the dinosaurs with extinction. Jurassic World: Fallen Kingdom is essentially spilt into two chapters, each offering polar opposite threats to our main characters, which ultimately leaves you satisfied.

Fallen Kingdom builds on the plot points from Jurassic World and develops them further, particularly about the rights of the dinosaurs, the bonds humans have with them and the subject of hybrids.  Claire Dearing (Bryce Dallas Howard) is now all for saving the dinosaurs as part of the DPG (Dinosaur Protection Group) and sets about a rescue mission to get them off Nublar, in particular Blue, the highly intelligent Velociraptor who of course shares a unique bond to Owen Grady (Chris Pratt)

This is likely to be our final look at the island in the series, so it had to leave an impact. At times it does and then sometimes it lets you down. The opening five minutes of the film are amazing, but later on some parts are a bit rushed. The Baryonyx in particular was featured in the trailers, but it does hardly anything in the main film, which is a disappointment. The pacing is also a bit off – it all seems to happen rather quickly leaving you wondering what on earth the time frame was on the island.  On the other hand, so many of the shots are gorgeous and the harrowing scene of seeing dinosaurs running away from certain death is impactful, with the final scene on Nublar ranking as one of the best in the series in my opinion. 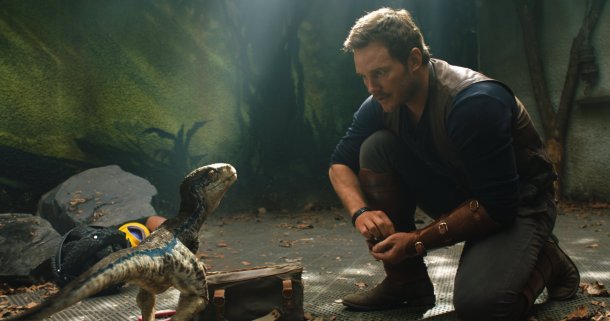 The second part of the film, which takes place on the mainland at Lockwood Manor, is the best part of the film. It shows the consequences of bringing these animals back to life and how money is a great evil. The new hybrid Indoraptor is a terrifying creature who fits into the horror direction J.A Bayona went for. The close quarter nature of the manor with the backdrop of rain and darkness create a haunting atmosphere, giving you that sense of tension which naturally works in a film like this. The manor plays home to some of the most dramatic and surprising scenes in the franchise, the climax in particular is wonderfully done.

As always in a Jurassic film, the stars are of course the dinosaurs, and this is where Fallen Kingdom sets itself apart from the previous films in the series. In Jurassic Park and the sequels, you do not really have any attachments towards the dinosaurs apart from the baby Rex in The Lost World. They are more of a survival style film, whereas World makes you think about their welfare. You find yourself really caring for all the dinosaurs especially Blue, Rexy and the newest star the Stygimoloch. All of the dinosaurs look wonderful, and at times, majestic which you would expect.

Fallen Kingdom, like Jurassic World, does suffer from a sub-par supporting cast. Franklin (Justice Smith) is Claire’s nerdy sidekick whose purpose is to purely reboot systems and annoy you with awkward lines. Zia (Daniella Pineda) does an OK job as the team’s vet but is not really memorable for much in the film. Rafe Spall does put on a decent performance though, as the main human villain Eli Mills. Another issue is that some scenes could have gone on for a bit longer, especially the fight scenes. They seemed to barely last that long, which is a shame because that is what audiences want to see. That way more ‘wow’ moments can be delivered, as that’s what these films are famous for.

Ultimately Fallen Kingdom improves on Jurassic World and Bayona has given the film its own unique style which sets it apart. The story of the consequences from human actions is very well done and will ultimately come to fruition in the third and final instalment.

Jurassic World: Fallen Kingdom is out now in UK cinemas.