If there ever was a more appropriate time to make and release a film detailing the bizarrely true story of Ron Stallworth, the African-American police detective who successfully infiltrated the Ku Klux Klan in the late seventies, then this must be it. With far-right radicalism and racism once again a prevalent hot topic in the current socio-political climate, director Spike Lee and producer Jordan Peele bring the remarkable story of Stallworth to the screen, in a manner that suggests a greater purpose then just mere biographical entertainment.

Based on the book of the same name, BlacKkKlansman wastes little time in getting straight to the point. After a brief but funny appearance from Alec Baldwin as a white supremacist speaker tripping over his lines in a faux propaganda newsreel, we are swiftly introduced to Stallworth (here played by the excellent John David Washington) as he becomes the first officer of colour within the Colorado Springs Police Department. Swiftly promoted to the investigations team, he wastes little time in spearheading an investigation into the activities of the KKK, which not only leads to him becoming a member of the organisation, but also sees him enter into a regular phone correspondence with the Grand Wizard of the KKK himself, the deplorable David Duke (Topher Grace). 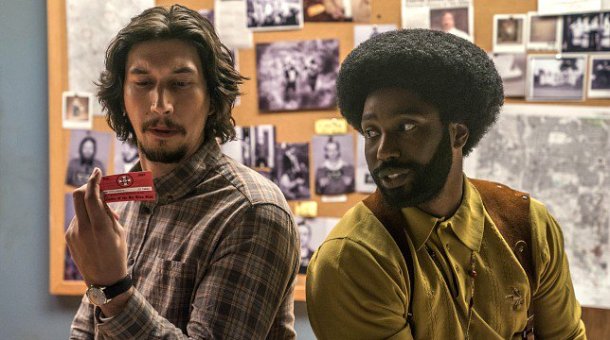 Recognizing the story’s true potential beyond it’s crime drama narrative, Spike Lee injects proceedings with the right amount of absurd humour, though never at the expense of the more dramatic aspects of the story. Blending various genres and styles throughout, the film achieves an almost anarchistic feel at times, occasionally foregoing conventional filmmaking techniques in favor of unconventional shots and edits. All of this adds to the slickness of the production and often plays as a throwback to the aesthetic of 70’s Blaxploitation movies, a key feature further pushed by the excellent, pumping soundtrack from composer Terence Blanchard.

Lee strikes the right tone with the film’s edgy subject matter, using humour to regularly offset against the darker aspects of the drama. The script is careful to portray the KKK and it’s repugnant members as stupid and hypocritical, yet consistently reminds us of their credibility as a threat, with their true abhorrent nastiness coming out in moments of genuine horror. The performances Lee coaxes from his cast also walk the fine line between send-up and straight drama – Jasper Pääkkönen is excellent as the racist and radical Felix, a character made in the typical redneck mold, yet possessed of a fierce and fear-inducing intelligence. Elsewhere, Topher Grace is superbly slimy as David Duke, providing the perfect portrait of a smarmy, corrupt wannabe-politician who turns from charm and smiles into a raving madman in the blink of an eye, whilst Adam Driver gives the film much of its heart as the undercover detective forced to disavow his Jewish heritage and convince as an anti-semitic Klansman in order to ensure Stallworth’s success. 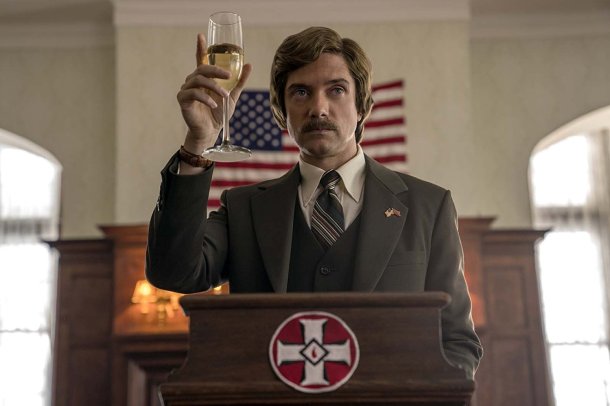 The real standout here though is John David Washington – beautifully nuanced throughout as Stallworth, underplaying the character’s drive and fury with a cool, understated edge that only gives way in moments of climactic tension. His onscreen chemistry with Laura Harrier as the spirited and determined equal rights activist Patrice lends the film much-needed moments of sweetness, but also provides even more conflict for the character when their conflicting ideologies come to the fore. Harrier delivers a perfectly pitched performance to rival her co-star, her character’s determined vigour and outspoken attitude ensuring the character is rightfully never just a stock love interest.

Much of the film’s social commentary is hardly subtle but it just about succeeds in making the relevant points clear for all to see without overdoing it. It is in the film’s closing moments that Lee truly hits the mark though, with a sudden narrative shift that forms a shocking and heartbreaking coda. Some may see it as out-of-step with the events before it, but it suitably reminds the audience how dangerous the ideologies of the KKK truly are and how modern society is even now standing at a crossroads…suffice to say, it’s unsettling stuff.

A fascinating true-story bought to life with an abundance of Spike Lee‘s signature style and wit, BlacKkKlansman is bolstered by terrific performances, powerful themes and deep-seated social commentary that resonates far beyond initial viewing. The final moments are especially haunting and powerful, ensuring the film stands out as an effective moral drama as well as a superbly entertaining biopic.

BlacKkKlansman is out in UK cinemas August 24th.