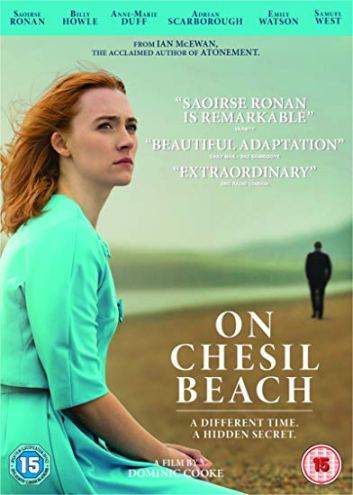 After the critical success of Atonement, the Oscar-winning adaptation of the Ian McEwan novel, it makes sense for directors to attempt to take on the rest of his written catalogue (think: perfect Oscar bait). For first-time feature film director Dominic Cooke, On Chesil Beach is a safe bet, especially given that one of its two main characters is played by Academy Award nominee Saoirse Ronan (coincidentally, previously nominated for Best Supporting Actress for her role in Atonement).

Set in 1962, preceding the bohemian free-spirited nature of the later 60s, Ronan stars as Florence Ponting, a young, passionate musician, daughter of middle class pomp and circumstance, destined for great things. Billy Howle (The Witness for the Prosecution, The Sense of an Ending) plays Edward Mayhew, a quiet, unkempt bookworm History student, brought up by his ‘brain damaged’ mother in a messy countryside cottage. The pair meet one afternoon at a CND meeting, Florence taken by Edward’s relaxed demeanour, he in love with her determination and kind heart. Perfect together, right?

We’re introduced to the pair on the evening of their wedding, spending the night at a hotel beside Chesil Beach in Dorest. After an awkward silver service dinner, Florence and Edward retire to the bedroom, where they’re to consumate their marriage and journey into proper adult life together. However, after a series of missteps and slip ups, Florence runs off to the beach, Edward following behind, confused by the upset. Things are slowly revealed as the past is told through several flashbacks – their first meeting, their relationships with their parents, the differences in their backgrounds – and it becomes clear that this isn’t wedded bliss, after all.

As expected, Ronan is stunning – not a surprise, considering her recent list of award nominations. She plays Florence with a mix of prim and proper nervousness, the heavy weight of the world glimpsed from her intense stares and flickering expressions. While she takes the lead in her quintet practices, appearing almost bossy and controlling, when it comes to her intimate relationship with Edward she truly hasn’t got a clue. Edward, meanwhile, bottles all emotions, again not surprising given the era their story is set in. Men are not allowed to show weakness, and wives must make their husbands happy: ‘With my body, I honour you’. When his imagined plan for their first evening together crashes to a halt, Edward’s happy, smiley demeanour slips, revealing an angry, tense little boy, throwing his toys out of his pram when he doesn’t get his own way.

Tackling themes of societal expectation, tradition and young love, Cooke and McEwan juggle the innocence of Florence and Edward with gentle hands, slowly building to the heartbreaking finale, leaving the audience to question their own life choices and ‘what if’s. While it doesn’t break down any boundaries or bring anything new to the adaptation genre, it’s a fine attempt by Cooke, signalling potential for his directing future.

On Chesil Beach is out on Digital Download and on DVD now.