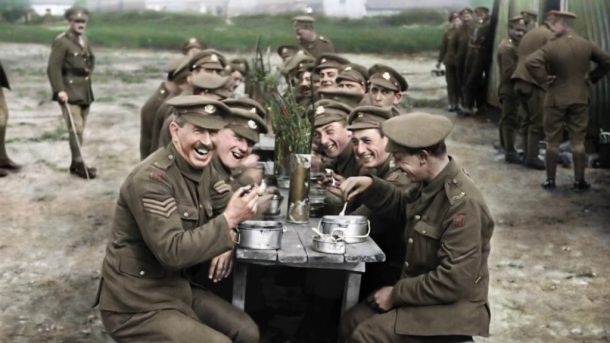 Four years ago, Peter Jackson was offered the chance to delve into the Great War archives of the Imperial War Museum to create a 30-minute documentary to commemorate the 100 year end of the First World War. With They Shall Not Grow Old, he has produced and directed an important and poignant film that’s become so much more than anyone hoped or anticipated. Not only does it offer a run-time of 1 hour 40 minutes, with edited hours of previously archival footage, it’s also colourised and consequentially transformed by Jackson and his team into something also unique and inventive.

Merging original footage, that’s been converted from old silent black and white film taken from the first-ever ‘live’ war footage with early cameras, the team initially restored that to a finer quality black and white and then spent the past few years adding colour to the films. Here it follows serviceman getting ready to go to War but also tracks the soldiers through the whole journey, from the small success to the huge losses. Furthermore, they occasionally add voices to the old footage, by using various technological techniques and lip-reading experts, that creates even more life than we’ve been witness to before. 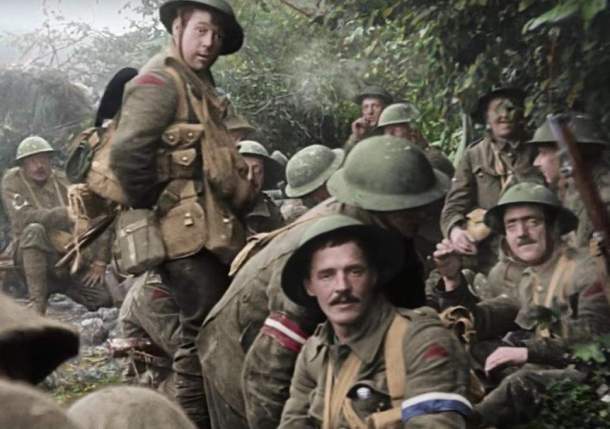 Colourisation might seem like an easy thing for some but the impact is vast when you see it for yourself. I’ve always had an interest in both World Wars but I’ve especially had a link to the First World War due to receiving my great-grandfather’s War Diaries for a while, that I even managed to transcribe. What always stood out for me from his words was how excited people were to go to war, and how they literally considered it an ‘adventure’ into the unknown. They Shall Not Grow Old backs this belief up with funny footage of the troops loving what they were going into but this was, of course, before the deep realities of combat seeped into their minds, bodies and took over, and this is only for the ones who survived it, of course.

Jackson’s film uses original soldier’s voices and stories as a voice-over throughout, so everything you see and feel is part of the factual side taken in interviews some years later. The memories can be upsetting but they’re also thoughtful and authentic, and it works tremendously work with the chosen films, both editorially and technically. While this film concentrates specifically on one British regiment, it doesn’t ever assume that others from all over the Empire didn’t have an important role to play. Jackson made it clear during the Q&A that the scope here for more stories is waiting in the wings.

One of the saddest outcomes of They Shall Not Grow Old might be that when surviving soldiers returned home, after winning the War, the general public didn’t seem to understand the scale of what they’d gone through and, for me, this goes a long way to explaining why the WW2 even followed. In a general sense, I assume the government felt like they’d won and that’s all that mattered. In reflection, their era wasn’t as aware of mental health and admitting to the reality of the world they’d just experienced. His film also highlights, from the people involved themselves, the pointlessness of war and how even when the Germans surrendered, they didn’t seem to know why they were fighting either and maybe those kind of beliefs just weren’t passed on at that point in history.

They Shall Not Grow Old is a cohesive, intelligent documentary that lifts new light on World War 1, it’s never subtle and it is also rightfully very honest alongside brutal, truthful footage that resonates deeply within the mind and soul, so in this 100 year commemoration of the end of the war, it couldn’t be more relevant.

Find out more about the project at 14-18 and check your local cinema for screenings. It’ll also be shown at the Imperial War Museum from 25 -29 October, it’s a vital watch.