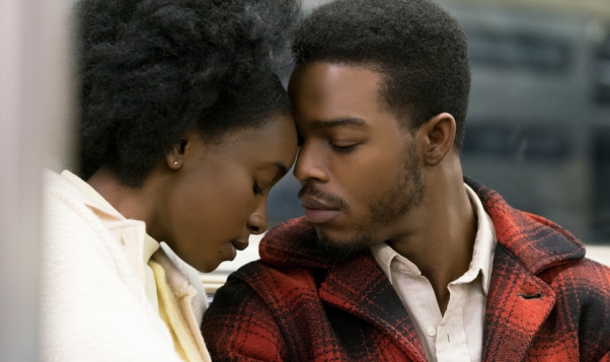 Whilst researching for this review, I discovered that Barry Jenkins – the Academy Award-winning screenwriter and director behind Moonlight – has directed three feature films. Three. Medicine for Melancholy (2008), 2016’s Moonlight, and now If Beale Street Could Talk, an adaptation of the acclaimed James Baldwin novel of the same name. For someone with such a distinguished, distinctive style, I guess I expected more, but Jenkins has honed his craft with short films, his training paying off tenfold. Despite my surprise, does he do Beale Street justice? It’s a resounding yes from me.

Clementine ‘Tish’ Rivers (KiKi Layne) and Alonzo ‘Fonny’ Hunt (Stephan James) were brought up together on the streets of Harlem. They’ve known each other their whole lives; their parents, too. So, when Fonny admits his feelings for Tish, that he sees her as more than a friend, it feels like a natural step forward for the pair. As their feelings for each other deepen and they take their blossoming relationship to the next level, they start to look for their own place, dreaming big but losing hope as they soon discover the added difficulties of being a young, black couple in 70s New York.

As things start to look up, they quickly come crashing back down hard, as Fonny is arrested for the suspected rape of a young woman (played by Emily Rios). Thrown in jail and with no predicted time scale for his court case, Tish and Fonny’s situation looks dire, more so when Tish tells him that she’s pregnant with his baby. Sitting her family down after dinner one night, they’re elated at the news, but their reactions couldn’t be any more of a contrast to Fonny’s mother (Aunjanue Ellis) and sisters’ disgust. God-fearing and bitter at her son’s apparent fall from grace, which Mrs Hunt blames on Tish, she curses the baby and the Rivers family, and is thrown out of the apartment by Ernestine (Teyonah Parris) and Sharon (Regina King), Tish’s older sister and mother.

What follows is an intense, expensive search for Fonny’s apparent victim, who has returned to her native Puerto Rico. Fonny continues to struggle under the watchful eye of the US justice system. Tish adapts to being pregnant and alone, loving Fonny from a distance, from behind a pane of glass, from the end of a telephone.

Jenkins takes Baldwin’s narrative and picks it apart, rearranging scenes, reordering the timeline. He leads us down a winding path, letting us slowly discover how Fonny lands in a jail cell, what circumstances and coincidental meetings result in his arrest. We’re shown glimpses of the pair’s childhood together, the solid foundation of their unstable relationship. Then Tish announcing her pregnancy. The night she conceived. The news that they’ve been accepted as tenants, Fonny’s happy howling in the streets. We can see their hope, feel it pouring off the screen, its warmth and depth. Jenkins’ use of colour not only sets the scene – autumn in 1970s New York – but the tone of the story, too. Lots of deep oranges, browns, dark blues, like a melancholy dream. Our hopes are built and dashed for Tish and Fonny as quickly as theirs are for themselves and their little family.

Topped off with performances of huge impact from the entire cast (which is no exaggeration), Baldwin’s story is carried with gentle hands by everyone involved. The chemistry between Layne and James is beautiful, fizzing and bubbling between them from the first moment. Jenkins plays on this believability, using point of view shots during dialogue between the characters – there’s no escaping the intensity of a front-on view, and every instance is as powerful as the next. We look as deeply into their eyes as they do each other’s; the audience are involved from the start, we’re part of their family, welcomed in with open arms.

Despite the original material being published in 1974 and set in the early 70s, its story and messages are still incredibly relevant to today, maybe even more so. Race and racism, faith, family, tradition, justice, love – ageless themes not affected by time or location. Based in and around an African American community, Baldwin’s story is powerful, political and poignant, and Jenkins is the perfect director to carry it all the way through to the end, and onto its much-deserved awards nominations.

If Beale Street Could Talk is hypnotic in its direction, cinematography and performances, a bittersweet story of love, loss and hope.

If Beale Street Could Talk arrives in UK cinemas this Friday 8 February.