This February, three more cult classics of cinema are joining the Vestron Collector’s Series. In the third of a trio of reviews, I look at the 1988 movie The Unholy.

New Orleans, a city with a dark underside of black magic and satanic worship. Two priests have been brutally murdered and the Unholy reigns, challenged only by the purest of souls. Father Michael (Ben Cross) is appointed to the ungodly parish. But is he strong enough to fight the ravishing temptation of evil?

Studio interference probably happens a lot more than Joe Public knows (or cares), but nowhere is the effect of that better felt than in The Unholy. The director wanted one film, Vestron wanted another, and the result is…well, half a trifle and half a shepherd’s pie. The story seems to go off at strange tangents and introduces characters we don’t really need and who ultimately offer little value, largely because they’re remnants of a different vision for the screenplay. Pick through what’s left, and it’s a mediocre demon vs pastor movie that struggles to keep its head above water.

I love 80s horror movies, and The Unholy is one that passed me by until recently. I really wanted to like it. I honestly did. But I don’t know what’s worse: the notion of the erotic, spiritual, romantic whodunit this could have been, or the flat, confused mess it actually is. The story we’ve ended up with isn’t particularly original, comprised mostly of either Father Michael interrogating people (remnants of the whodunit I spoke of), or being interrogated himself. The horror element is enjoyable enough, but is nevertheless unremarkable. We have a demon who manifests as a siren, and whose true form isn’t revealed until the end. It’s an ending which is, by turns, both the best part of the entire film, and the worst. Call me crazy, but nothing in the first 80 minutes of this film suggests we should expect a rubber monster at the end. But that’s what we get. And if you watch the special features, you realise we actually get two different ones (both are equally awful). 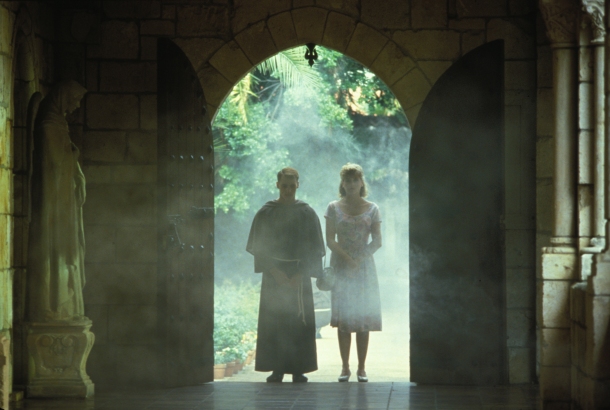 Horror movies in the 1980s are littered with rubber monsters, like Gremlins,Critters and Ghoulies but the demon here is a dismal affair., think somewhere between Basket Case and Xtro, and you’re pretty much there. In a way, I feel sorry for The Unholy. It originally hit the streets right in the heyday of franchises like Nightmare on Elm Street, Friday 13th and Hellraiser. Consequently, and I’m only guessing here, Vestron wanted something that stood half a chance of competing (it’s surely no coincidence that the tone of the original theatrical trailer for The Unholy absolutely screams Nightmare on Elm Street at you).

What we have in The Unholy is a sort-of detective story mixed with a sort-of Satanic thriller, with a sort-of creature feature tacked onto the end. The ending is like a plate of onion rings and fills a gap but it has no business sharing a plate with the rest of your meal. And that’s the ending of The Unholy. It’s enjoyable, it does the job of bridging the last interrogation scene with the end credits, but really – what is it doing here?

Ultimately, though, mine is just a lone voice of dissent. I can’t find a single other reviewer who agrees with me. So, if you like 80s horror movies and fancy one with religious undertones and lot of interrogations, The Unholy might just be right up your alley.

Special features on this new Blu-ray release include a documentary about the visual effects, and an audio interview with composer Roger Bellon, along with an isolated score version of the movie. Most interesting of all, though, is the interview with production designer and co-writer Fernando Fonseca, which also features some isolated selections from his unused score. .

The Unholy comes to Blu-ray on February 25th.