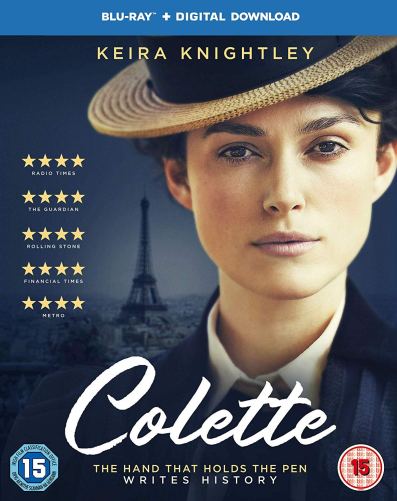 Based on the life of Sidonie-Gabrielle Colette, the famous French novelist of the late 19th and early 20th century, the film focuses initially on the progression of Colette (Keira Knightley) finding herself as a writer. We’re shown how she ghost writes for her ‘famous author’ husband Willy (Dominic West), and then it begins to move towards her emancipation and discovery of the life she wants beyond the bubble of success that comes from falsified creative highs.

Colette is a curious beast, and like any part biopic and dramatisation, there are questionable moments of progression and character. Whilst Colette, beneath the surface, is a fascinating story and an intriguing historic character, I’m never quite sure you really get deep into the heart of the matter due to a few discrepancies that detract from the story that lingers in the soul of Keira’s Colette.

They chose to tell the story in English but with the nice touch of the writing in French itself, as it was written, which we see in the ‘hand’ of Colette.  However, the connection I missed was this very French story being anglicized and felt throughout that it loses a spark that an actual French film could have held over it. With something so scandalous and sensual, Knightley’s distinct Englishness – alongside the speedy time jumps – never really gives time for anything to settle, as if we’re fast-forwarding through the history of a life that deserves a more specific focus.

My other issue is with another very English man, in the shape of Dominic West as Willy. While his sense of adventure, and love for other women, is natural alongside his turn for the theatrical, I do find his character somewhat one-dimensioned in terms of either likeability or the complete opposite, he glides through proceedings, being occasionally sleazy and – disregarding the era – you still wonder why he’s part of her life, given her own self-belief. He’s disappointingly distracting on this occasion, and maybe too prominent throughout the narrative.

However, Director Wash Westmoreland films this period piece with beauty and subtle originality, using mirrors throughout to offer scope in numerous scenes, maybe to reflect the characters within and you rarely doubt the era of change and different perspectives on relationships and what people are beginning to be excited by in terms of entertainment.

As the film speeds through various love affairs, lies, self-discovery and sexual encounters, Colette will find, beyond the mirrors, the liberation of herself outside the constraints of society. However, it’s so smoothly achieved that it lacks a rough edge, the same feeling I had for Bohemian Rhapsody. There’s not much to challenge the viewer but, on the flip-side, it is also an important story and because Knightley gives a top class performance, it’s worth the occasional slog as you’re with her while she negotiates the peaks and troughs of a remarkable life.

Colette comes to Blu-ray and DVD on 13 May, order it now: https://amzn.to/2J6zUdJ