For reasons unbeknown to me, I had never been to Beautiful Days before, even though it’s only a 45 minute drive from where I live, so figured 2019 was the time to change that.  Not wanting to go it alone, I dragged my teenage son kicking and screaming (from in front of his Xbox), loaded the van with camping gear, handy supplies and headed their for three days of positive escapism.

Arriving on Thursday evening, I was advised this is a smart plan if you’re after an advantageous flat camping spot, the Westcountry rain was imminent and so thought setting up shelter was the first thing to get sorted. Upon settling in, there were also a few pop-up gigs that night, at random locations, so spirits were already high and the fiesta was underway.

Where does it take place?

Running 16th – 18th August, in the outstanding setting of Escot Park near Exeter, the festival was founded, and managed, by band The Levellers and first held back in 2003, they pride themselves on being “the festival that sells out … by not selling out” and it has, incredibly, sold out of tickets each year, with a current capacity of over 17,500. 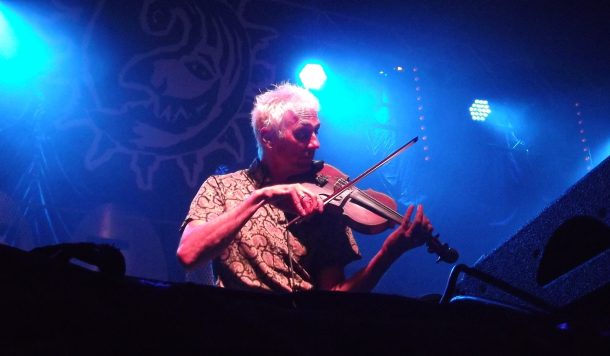 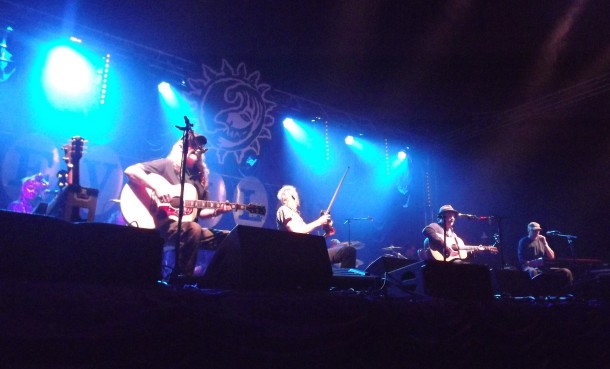 Personally, the big opening day was one of my main highlights as The Levellers themselves kicked off proceedings with a vibrant acoustic set at The Big Top in the afternoon. We were lucky enough to head backstage, and had access to photo pit, to get all close and personal with a band I’d first seen as an impressionable teenager, some 27 years ago, at Glastonbury Festival. As they started, the memories flooded back, the music took control and I found myself doing a little jig on the spot, much to the embarrassment of my son! They finished with ‘What a Beautiful Day’ and instead of the usual smoke machines, bubble machines burst into life and the front audience where engulfed, much to all the kids delight. This moment of joy pretty much set the scene for the whole weekend.

Beautiful Days is not just about the music though, it’s advertised as a family festival and it very much is, the children’s area is large and covers all ages, from sand pits for the toddlers, to a tent were only teenagers are allowed – Who’d a thought it! The ‘Redwoods’ area has its own Theatre Tent for performance from cabaret through to storytelling, from comedians to puppet shows for the young and old. Along with an Arts and Crafts area, where you can watch or even join in with workshops, teaching you how to work with wood, willow, metal and leather. I would definitely recommend looking up ‘Masque the Rage’ or ‘Engineers of Desire’ for some very cool clothes and masks. 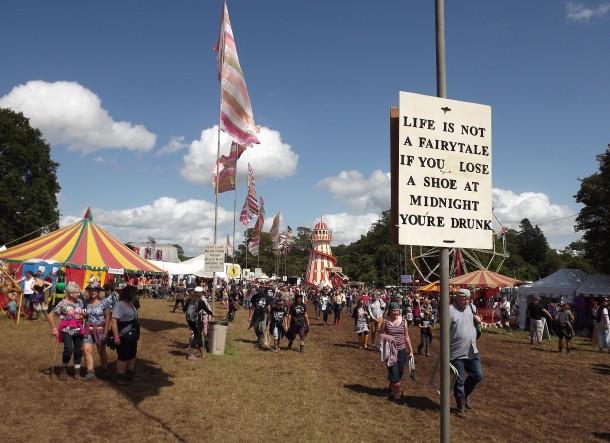 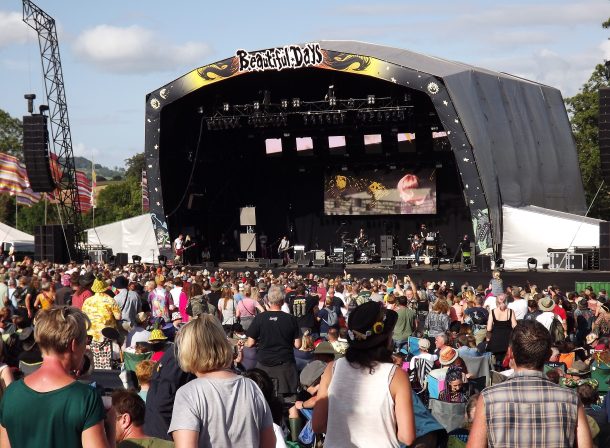 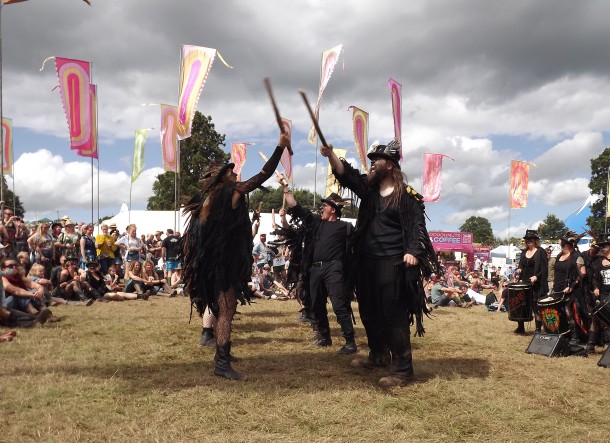 Hungry, I here you say? The food on offer is vast, definitely something for everyone, including the likes of Indian, Jamaican, Fish and Chips, Vegan, Veggie, Hog Roast and everything in-between! You name it, you can probably find a way to eat it.

Thirsty? While you can bring your own booze, there are plenty of bars around the site, so your throat should never dry but our favourite: The Bimble Inn. This little beauty might well be the best of all bars, situated away from the main site and snuggled down in a small valley, it’s a cracking venue. While it’s small, so is the tent and stage, so it develops into a mini-festival of its own, within the Beautiful Days festival itself. This quirky corner had some great music acts and when the sun returned, the surrounding hill is full of the throngs of fellow festival folks, listening to music and enjoying the atmosphere. I’d guess, and this is honestly speculation, it’d be quite easy to get stuck there for some time!

As Friday ‘Bimbled’ on, more music came blasting form the main stage, we popped over to catch the set from mid-90’s indie group Cast, who were on top form and sounding great. Legends The Stranglers followed up, and even though the heavens opened and an almighty rain storm soaked the entire festival, spirits were not dampened as thousands danced and sang to some Stranglers classics. Seeking shelter in the Big Top, as I’d been told that Songhoy Blues were worth seeing and they didn’t disappoint. Hailing from Mali in Africa, the quartet take on a ‘desert blues’ guise, blending reggae, rock and blues in an African style, it was sublime. If you ever get a chance go see them, you won’t be able to take your eyes off them or stop yourself from being taken by the rhythm. We also have to recommend local, solo act Samantics who was highly entertaining, he raps and sings about his experiences with mental health, the lyrics are intelligent and witty, the crowd were very supportive and he proclaimed that it was “the best gig of his life” and, you know what, I don’t doubt it. 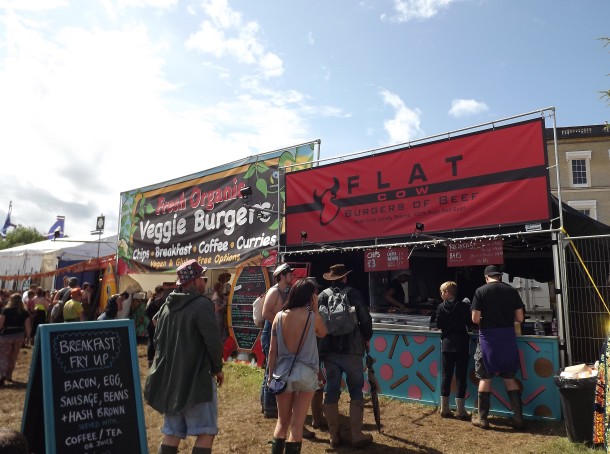 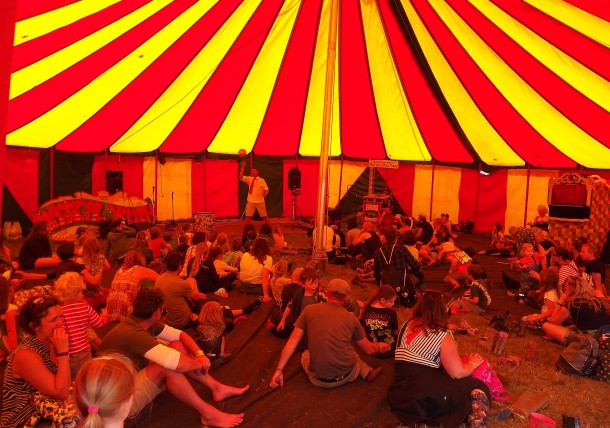 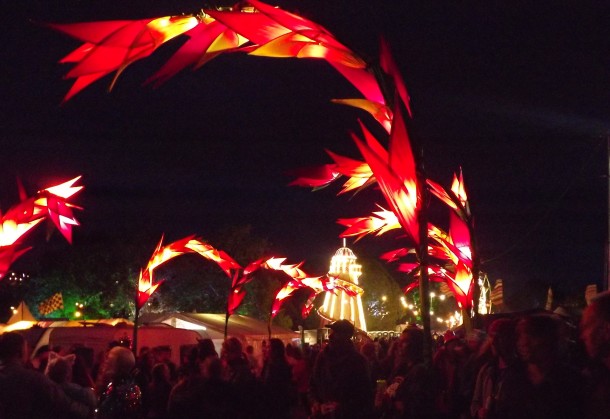 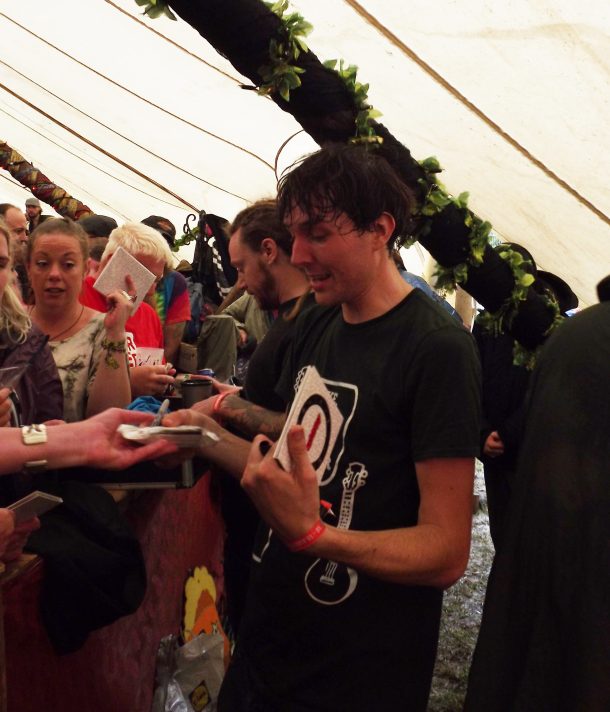 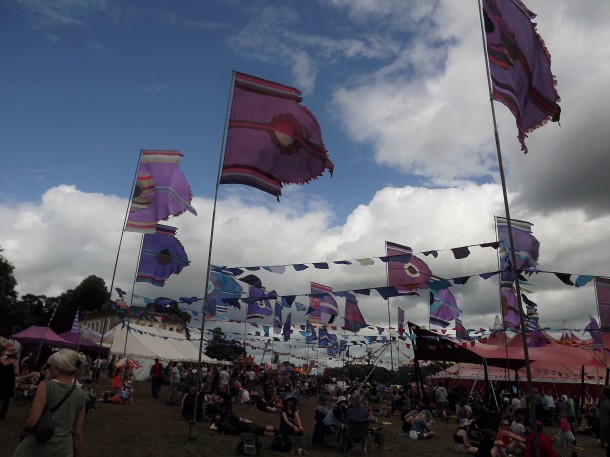 The sun arose in the morning quicker than I did, let’s just say the Bimble Inn might have got the better of me, and the festival was underway once more. We wandered around the grounds, sampled the foods on offer and joined the crowds on the hill in front of the main stage. As it was still early doors on the day, we took in some of the lesser-known acts including Tide Lines and She Drew the Gun, who both particularly stood out in the memory. Later on, another legend in the shape of Peter Hook appears, famous for being a main man in Joy Division and New Order, he played the classics and went down a storm. I then nipped backstage to meet Ash, and lead singer Tim Wheeler, and then took in some action and shots from the front, they sounded better than ever and got the crowd jumping.

Sleaford Mods were up next and while I’m struggling for a way to describe them, someone said they’re like Marmite, love them or hate them, I think the crowd was split and there were a lot of parents covering their kids ears, go take a listen and you’ll find out what I mean. Then it was time for the big one, as headliner Ziggy Marley was on. While I really didn’t know what to expect, as soon as the first baselines pumped from the massive sound system, everyone knew what was coming. The huge reggae beat filled the skies and people danced gloriously. Ziggy played a lot of his own songs, as you’d expect, but also threw in a few of his Dad’s songs, which were well received, the set peaked and ended with ‘One Love’ and as the crowds drifted away, there really was a warm feeling that every little thing was going to be all right. 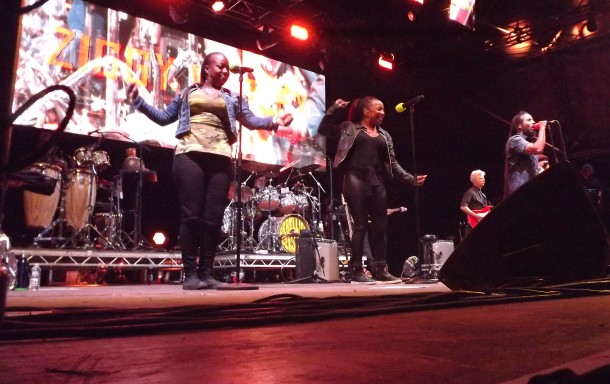 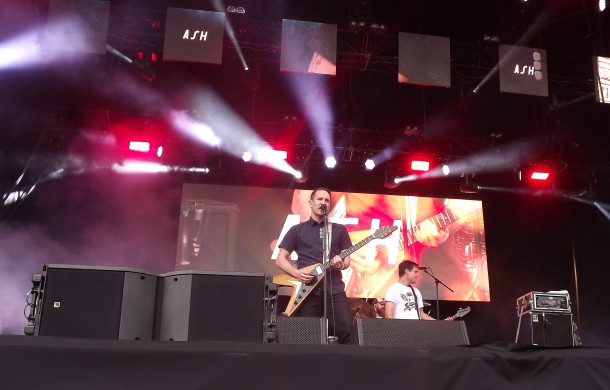 You’d think that after two days, we’d all be flagging a little and maybe the general enthusiasm would wane somewhat but, you know at Beautiful Days, you’d be wrong! Somehow, and I swear this was unintentional,  it began back down the Bimble Inn with Reverend Ike’s Sunday Soul Service and followed by the uplifting talents of Funke And The Two Tone Baby, who was a solo artist that uses loop pedals to their full potential and got Sunday bopping to the blues. After another positive experience, and so I wouldn’t peak too early, I strolled over to the Big Top and watched Sound of the Sirens, a female Westcountry folk/rock duo who sounded amazing, their album ‘This Time’ is out now and absolutely recommended.

Beautiful Days is an upbeat place and so it wasn’t long before we were back at the main stage for an even bigger party, as folk/rock/reggae band Ferocious Dog smashed it out the park and set the scene for festival finale. First up, American punk rock band Less Than Jake took over and with their onstage humour, honking brass section and rocking riffs, really got everyone jumping. It’s hard to explain but when the crowd formed a huge circle mosh pit, around a massive walking tree on stilts, you know everyone is at one hell of a gig! Following on was another American punk rock band, but heroes in their own right from the 80s, NOFX who hold nothing back. Led by Fat Mike with bright blue hair and wearing an outstanding dress, they did what they do best, fast and furious punk rock. 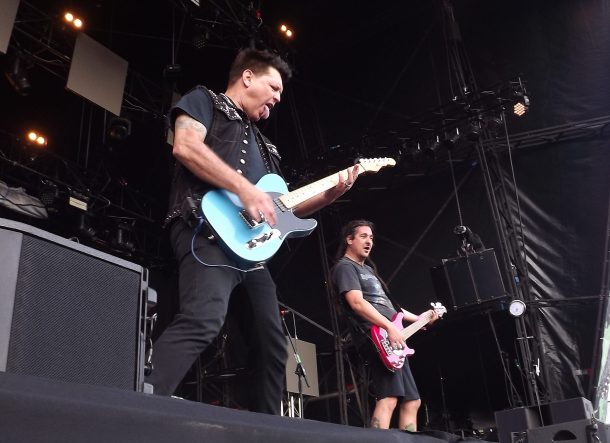 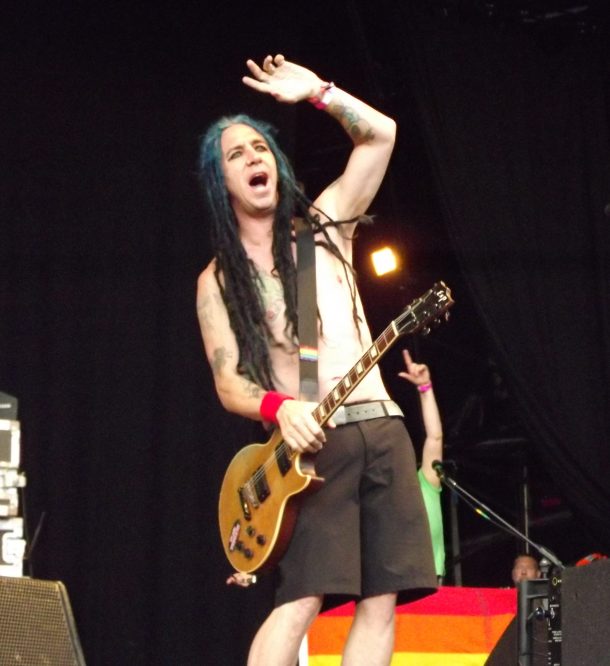 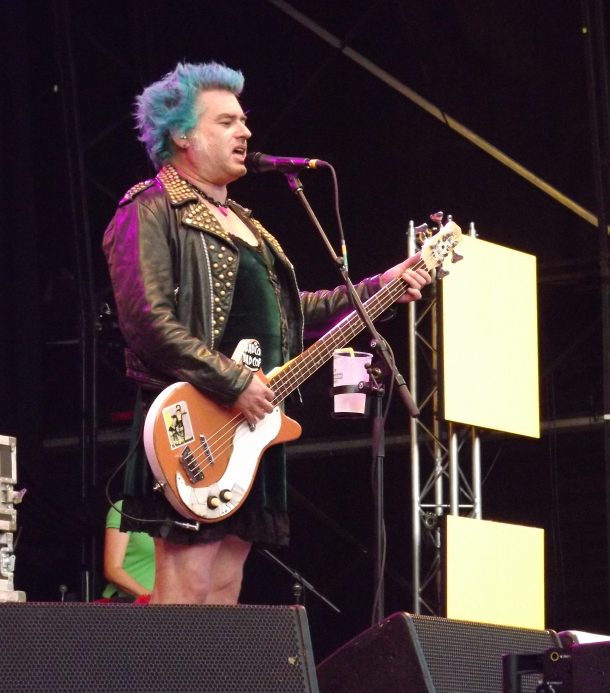 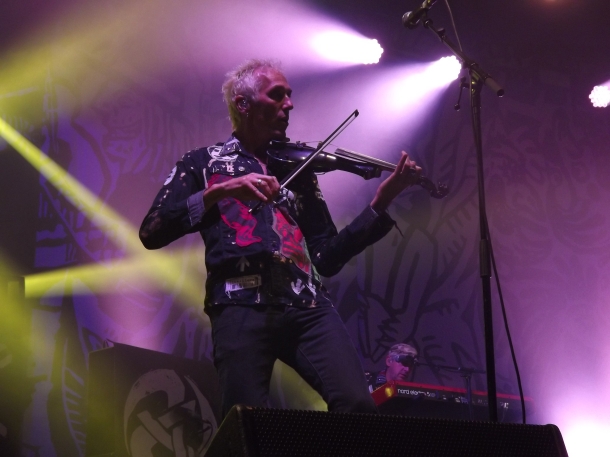 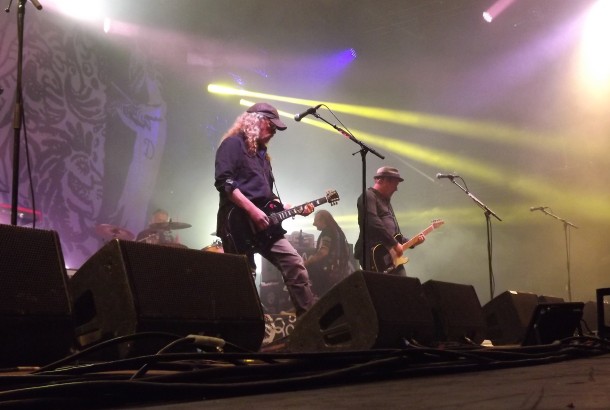 So, then, with the festival moving towards its closing hours, there was only one band left: The Levellers and this year would be slightly different, and what a glorious surprise it was. Back in 1994 at Glastonbury Festival, they played a headlining set that has been talked about for years, so to celebrate the 25th anniversary of this, they brought out the same, magnificent set list.  Well, I don’t know about everyone else but I’m pretty sure they enjoyed it just as much and to get the full perspective, I watched from the back of the arena, up on the hill overlooking the main stage. The light show was incredible, the songs sounded as good as always and thousands of people bobbed, bounced and swooped through the whole set, it could easily have been ‘94 all over again!

Then, as the last song played out across the festival, a firework display exploded into life from behind the stage and all was done, it really couldn’t have been a better ending to a fantastic festival. So, while I wondered why I hadn’t done this before, it couldn’t have been a more inspiring experience and if you’ve never been? You need to go, I know I’ll be back.

What Beautiful Days they were!

Register now on their site for info on Beautiful Days 2020 and, because you’d love it, find out more: https://www.beautifuldays.org 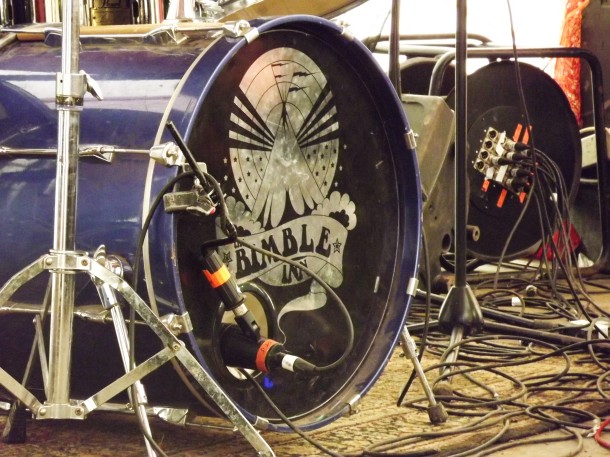