If you head back to 1994 and the glorious Clerks, from Writer/Director Kevin Smith, then you definitely know Jay and Silent Bob, played by friends Jason Mewes and Kevin Smith respectively. While Smith has gone on to be successful as an filmmaker, actor, author, and podcaster, Mewes has had varied success but remained a cult figure for many. While he also had issues with substance abuse in the past, he’s been clean since 2010 and it’s fair say that he’s best known as Jay from the aforementioned duo.

Madness in the Method is Mewes directing debut, in which he also stars. Written by Dominic Burns and Chris Anastasi, Mewes plays a version of himself who attempts to become a method actor in order to get better roles and respect amongst his peers but, of course, things don’t exactly go according to plan. Opening with Jay auditioning for a part ‘against type’, he tries his best but the casting director doesn’t want him for the main role, he wants him to try out for the stoner friend, which he obviously doesn’t want. Immediately, we get a vibe of what to expect from the upcoming film, very low-fi indie and that it’s going to be an inside look at the life of an actor, very tongue-in-cheek, a large dash of parody and also a send up of the world of acting.

Storming off, and getting a sense of where we might be going, we fast-forward through a quick history lesson about Mewes’ life, his estranged relationship with his Mother and eventually how he met Kevin Smith. It’s a solid start and it’s not long before we’re heading into doc/mockumentary territory complete with random cameos (Dean Cain, Teri Hatcher, Evanna Lynch, David Dastmalchian, Brian O’Halloran, Matt Willis, Vinnie Jones, Paul Chowdhry to name a selection) from a whole host of people Jason knows, plus Gina Carano as his girlfriend.

So, while Mewes wants to break into the industry with a proper character role, he doesn’t really know how to achieve it. After a meeting with Smith, his mate recommends method acting and claims it’s the only thing he needs to do if he wants to be successful, however… he needs a special book, one that will change his life forever. But there’s a catch, there’s only one in existence and, like a Holy Grail, he might have to do certain things to get it. So Mewes heads out to find it, meets the man who has it and things become a little Bill & Ted/Wayne’s World but, you see, nowhere near as slick… and from here a host of craziness is set in motion. 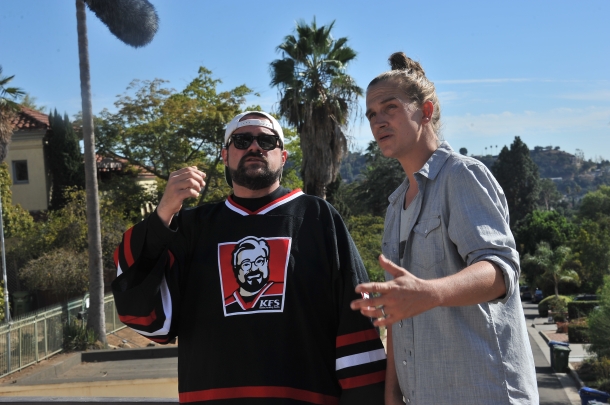 Along the journey, there’s a strong argument scene between Kevin and Jason, which felt like they re-created something real from years ago, which comes across as deeply poignant but, overall, there’s not enough truth here. While there are chats about addiction, there’s also an overabundance of self-referential nods to the audience, so much so that it gets repetitive and distracting. There’s also a big issue with the editing, which often just ends a scene and heads somewhere else without warning. That mish-mash makes it jarring and when you throw in the half-honest approach, and the lack of it at the same time, you never really settle into anything cohesive.

Madness in the Method is an odd film, there’s no bones about it. While Mewes is likeable, this is a messy film. Full of fun things like comics, cameos and life imitating art, it tries really hard to make sense but, in reality, feels like a series of smaller ‘moments’ haphazardly stitched together. There’s almost every genre going on at some point but, what’s even stranger, is there are proper laugh-out-loud moments, I just wish it was a bit smarter with the overall narrative. Sure, this is a parody and it does contain a nice mix of silly and indie violence but this isn’t great as a full feature. However, it has moments of being unusually charming, like Mewes himself, and does contain the final scene appearance of Stan Lee, so that’s something special.

FrightFest presented the European Premiere of Madness in the Method on 24 August at 8.45pm in the Arrow Video Screen and 9.15pm in the Horror Channel Screen at the Cineworld Leicester Square.