Set in the world of Stephen King and produced by J.J. Abrams, Castle Rock is set to release in the UK on DVD, Blu-ray and Digital Download September 2nd after receiving immense critic and fan acclaim last year following its debut on Hulu! We enjoyed it immensely, read more about what you’ll get on the Home Entertainment release by clicking here!

The series is dense, dark and littered with subtle King nods: an original story that combines the mythological scale and intimate character storytelling of King’s best loved works, while weaving an epic saga of darkness and light that’s played out on a few square miles of Maine woodland. If you aren’t familiar with the master of horror’s previous work, do not fear as Castle Rock is still accessible. In fact, it doesn’t require any prior knowledge, as it focuses on its own mystery, which is only loosely tied to previous works.

Castle Rock follows Henry Deaver (André Holland), a death row attorney who returns to Castle Rock, Maine, his hometown, after he receives an anonymous phone call from the infamous Shawshank State Penitentiary. The call is about a nameless young man (Bill Skarsgård) who is found locked in an underground cage that’s located in a long-abandoned cell block beneath the prison. Upon his discovery, the mysterious young man, with a sinister and unnerving presence, whispers Henry’s name. Curious about how and why someone left this boy imprisoned, Henry is drawn into the case and attempts to help him. But there are reasons why “The Kid” was imprisoned.  And reasons why he should never be set free.

Permeated with a sense of foreboding and dread, the haunting small town of Castle Rock is not willing to let Henry leave. Henry reconnects with his dementia-ridden mother, Ruth (Sissy Spacek); his precognitive childhood friend, Molly Strand (Melanie Lynskey); and other colourful Castle Rock residents, who both fear and distrust him due to a mysterious event in his childhood that left his father dead. Like all the best King works, this is as much a social commentary as it is a horror story, with the real scares coming not from the supernatural, but from an inherently mortal ugliness.

Evidently, Castle Rock is a beast in itself, with a totally separate narrative. However, it operates in the same world as King’s works, a town he conjured and continues to utilise so, for those curious how the show fits into the King multiverse, we’ve amalgamated a list of the major referenced works within the pilot episode, and how they emphasise Castle Rock‘s lengthy, dark history.

The most noteworthy King callout in Castle Rock is Shawshank Prison, the main setting of his short story Rita Hayworth and Shawshank Redemption, and the 1994 movie adaptation. A large portion of Castle Rock takes place inside the prison and introduces two new characters to its lore: Warden Dale Lacy (Terry O’Quinn) and “The Kid” (Skarsgård), a feral man found in the bowels of Shawshank after Lacy’s suicide.

There are plenty of fun, small Shawshank Redemption references in the pilot. For instance, when Warden Lacy’s replacement, played by Ann Cusack, is given a tour of her new office, a guard informs her Shawshank has lost “four wardens in office” and starts to say “you can still see the bullet hole where Warden Norton” before he’s cut off. Warden Norton is a character from Shawshank Redemption who fatally shoots himself to avoid arrest near the story’s close. 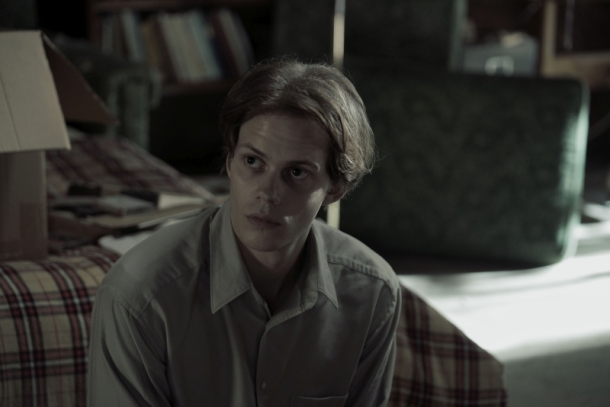 IT is another Maine-set King novel, although it doesn’t take place in Castle Rock, but in the fictional town of Derry. And yet, there are a few nods to IT peppered in Castle Rock, the most obvious being Bill Skarsgård. The Swedish actor plays “The Kid” in the series, but recently portrayed Pennywise in the big-screen adaptation of IT: Chapter One. Is it pure coincidence that he shows up here as a brand-new King-verse character, or is it a larger part of the show’s meta-commentary?

IT also factors into the show’s opening credits, which show a page from the novel and also a map of Maine, with Derry’s location in relation to Castle Rock. In later episodes, the characters mention a restaurant called Nan’s Luncheonette, which is located in Derry in IT, but is also mentioned in King’s The Sun Dog and Needful Things, which both take place in Castle Rock. Could the two towns be connected somehow? Will characters from IT make their way east, and join the show’s chorus? Time will tell.

Castle Rock’s connection to The Shining is one of its more curious aspects. The novel, as well as Stanley Kubrick’s 1980 film of the same name, take place in Colorado, with flashbacks set in Vermont, not Maine. Why, then, are there so many allusions to The Shining in the show? The opening credits centre largely on the story of Jack Torrance and the Overlook Hotel; as the pages of text unfold, we see references to, “All work and no play make Jack a dull boy” (the phrase Jack types over and over while engulfed in madness) and Room 217, the most haunted room in the hotel. Curiously, however, those references come from different sources. The “all work and no play” phrase is from Kubrick’s film and doesn’t appear in the book, but Room 217 is from the book and was changed to Room 237 for the film.

There are references in the show too – the biggest one being Jane Levy’s character, who’s named Jackie Torrance, an obvious play on Jack Torrance. In The Shining’s sequel, Doctor Sleep, which is set in New England and mentions the town of Castle Rock in passing, we learn that Jack had a secret love child. Could Jackie be a different version of that kid? Whoever she is, she’s one of the most fascinating characters in the show, seemingly attuned to a different frequency than the other characters. 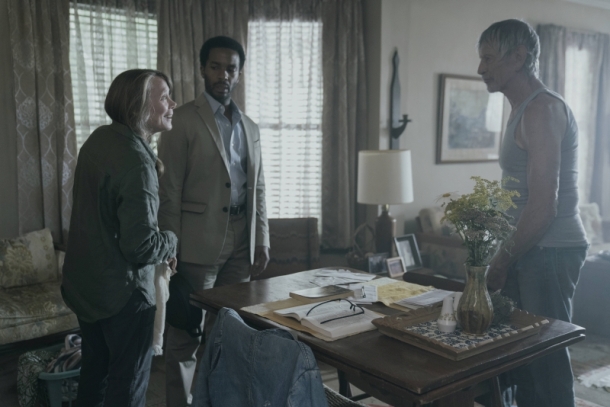 References to Needful Things are plentiful in Castle Rock. Residents spend time at The Mellow Tiger, a local bar that is also a setting in the novel. In one scene, as Henry Deaver investigates Warden Lacy’s home, he finds a file of news clippings, one with a headline that reads, “Shopkeeper missing after oddity store fire.” Needful Things is about an oddity store owner who lives in Castle Rock.

The biggest Needful Things nod, and one of the biggest tie-ins to all of King’s work in Castle Rock, is the character Alan Pangborn, played by Scott Glenn. Pangborn is the sheriff in Needful Things and The Dark Half, The Sun Dog and is mentioned in Bag of Bones and Gerald’s Game. In the show, he’s retired from sheriff duties, and is together with Henry Deaver’s mother. He’s also connected to Henry’s past, having come into his life during the events of his father’s death. Due to the fact he’s tied so directly to King’s mythology, he’s the likeliest source of future tie-in storylines, so be sure to keep your eyes peeled for what he does next.

King’s short story The Body, which was turned into the 1986 movie Stand By Me, is set in Castle Rock, Maine, and its events are referred to several times in the series. Lacy’s clippings also show a headline that reads, “Anonymous tip leads to boy’s body,” which is a direct tie to the story, about a group of young boys who go searching for a dead body. (The clippings also have a headline about a rabid dog, which is a Cujo reference.) A man named Richard Chambers is also referenced in the pilot, he’s the murdered husband of Henry’s client, which could well be a reference to one of the antagonists in Stand By Me, who has the same name.

Own Castle Rock on Blu-ray, DVD and Digital Download September 2nd and be sure to catch even more references lurking in the margins of Castle Rock, waiting to reveal themselves.