Most of us will probably have fond memories of the original animated 1992 Aladdin due to Robin Williams, who was the fire in the film with an unforgettable performance as Genie, even if it was just his voice, it felt more than that. Rumour has it that the ad-lib comedy legend came up with so much material, that it basically changed the way the animation was developed, more than it ever had before that moment. For me, in that era, it was always Beauty and the Beast and The Little Mermaid that I recall and definitely found a place in my head and heart growing up.

But moving forward to 2019 and Disney’s new ‘live action’ Aladdin and we’ve got a whole new… take on the adventure. I went in with an open mind but it’s safe to say the initial launch didn’t exactly set the pulses running, judging by the reaction to the trailer and issues with something blue and overly CGI, it maybe gave Disney a moment to look back and – possibly – re-jig a few things before the film went live ‘live’. So does 2019’s Aladdin live up to the story it represents, and did they change a few things? It doesn’t seem like it…

The first issue is director is Guy Ritchie and his specific style, while it works wonders in the dark, gritty streets of London in the likes of Lock, Stock… and Sherlock, here it’s all a bit haphazard. His signature approach to action set-pieces comes across, all quick edits and sharp moves, but musicals are a different thing about especially cartoon-like ones. You can also only offer up so many sweeping shots of the impressive looking Agrabah before it gets repetitive. While they’re certainly showing off the city, and it does look detailed and lived-in, it doesn’t detract from the wider issues or how a similar shot can also take away from the grandeur.

Performance wise, the lead trio are good enough to carry the film and offer some wholesome family entertainment. Naomi Scott‘s Princess Jasmine stands out above the rest, she’s smartly done and very slightly updated, in a positive sense. It feels like there was a moment here to completely change the approach, and even alter the story to still find a happy ending, but those changes don’t really come despite suggestions in the likes of the new song ‘Speechless‘, which is performed with a deeply emotive touch. There must also be a shout out for the naturally entertaining Nasim Pedrad as Dalia, she was superb, and a brief cameo from Billy Magnussen, who’s very funny. 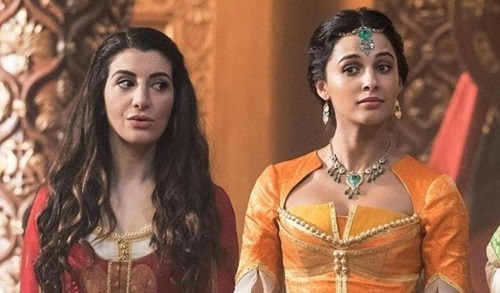 Mena Massoud‘s Aladdin is good Disney off-kilter character stuff, with very white teeth for a ‘street rat’, and he does what he can with the material here. He has natural chemistry with Scott’s Jasmine but he’s the also the classic happy-go-lucky caricature with an unusual DiCaprio-in-Titanic vibe going on, much like Alden Ehrenreich‘s Solo, in which they’re all ‘I just have a penny in my pocket and my wits to survive’ narrative, without much more depth than that. You’d think that with all their scope, Disney would invest in new stories and while we know they’re not finished with these remakes, it’s beginning to feel like they should have more respect for their audiences.

But, before we digress again, Aladdin does have its fun moments, the main three characters throw themselves into the story and, if anything, Will Smith as a new Genie really brings all the light and liveliness. Jafar (Marwan Kenzari), who is an epic baddie in the animation, is bland with little strength and worst of all, the parrot Iago is nothing more than a flicker in the corner of the screen. When you’ve got the voice of Alan Tudyk on board, he’s vastly underused and it’s noticeable.

For me, Disney should be about invention and while the imagery in Aladdin can be huge, if you know the original, you really will miss Williams’ Genie and also that unknown that builds when you don’t know where the story is going. Of course, Disney do follow a specific path of story-line in most of the things they do, that much is expected, but as good and ‘big’ as this is, it’s all just a bit affable, no doubt good for painless family viewing but so little is offered in the way of surprises.

The overall sentiment? Why didn’t they just make a new version? Give it a full modern twist, not just occasional progression. This story has oodles of potential just waiting to be modernised. Scale and set-pieces? You got it. Larger than life main characters? Absolutely. Originality? Disappointingly not.

Aladdin is out now to own on Blu-ray and DVD: https://amzn.to/2myoWDB