Doctor Who‘s twenty-third season came at a rather strange point in the original run. After narrowly surviving cancellation in 1985, producer John Nathan-Turner and script editor Eric Saward planned to bring it back in a big way – despite format changes, budget cuts and mandates from the high-ups at the BBC. The end result was one epic 14-part serial The Trial of a Time Lord, which saw the Sixth Doctor (Colin Baker) put on trial by the Time Lords, represented by the Inquisitor (Lynda Bellingham) and the Valeyard (Michael Jayston), as an A Christmas Carol homage, split into four segments – set in the past, present and future, alongside an epilogue to the story.

It’s fair to say that Season 23 was heavily criticised by Doctor Who fans at the time – including one Chris Chibnall – but 33 years later, BBC Studios have released Doctor Who: The Collection – Season 23 on Limited Edition Blu-ray; ready to be placed on trial once more.

The Collection releases have been stellar so far and Season 23 is yet another win for the range, boasting gorgeous artwork from Lee Binding, a brilliant behind-the-scenes booklet written by Pete McTighe and six full discs of content (making the original four-disc DVD seem slightly less impressive). I was initially sceptical after the DVD release was so strong but the new features make for a much-improved release. Parts One to Four (The Mysterious Planet) is a rather odd opener to the season, after an incredible opening model shot – accompanied by Dominic Glynn‘s eerie music – it then cuts to a slightly rubbish courtroom, set to be our key location for the next fourteen episodes. The actual story of The Mysterious Planet is perhaps not the most memorable, from legendary Who scribe Robert Holmes, but the script sparkles with wit and wonderful dialogue, despite mixed production values. Jathro the Robot looks terrific, with his limited mobility feeling much more authentic than the more flexible robots one would expect to see today. When all is said and done, it’s a rather weak start to Season 23, but not without merit.

Parts Five to Eight (Mindwarp) makes for a much more encouraging follow-up, with Vengeance on Varos author Philip Martin returning, alongside his own villain Sil (Nabil Shaban). Mindwarp plays rather like a black comedy at points, with some hilarious one-liners and a classic Brian Blessed guest performance. Sil and his Lord Kiv (Christopher Ryan) are great baddies and very well-realised. However, later in the story they meet with another alien delegate, more likely to prompt chuckles than screams thanks to a rather weak re-use of bits of previous monster costumes. The ending is pretty morbid too and would be considered a real “water-cooler moment” in today’s Game of Thrones television landscape. 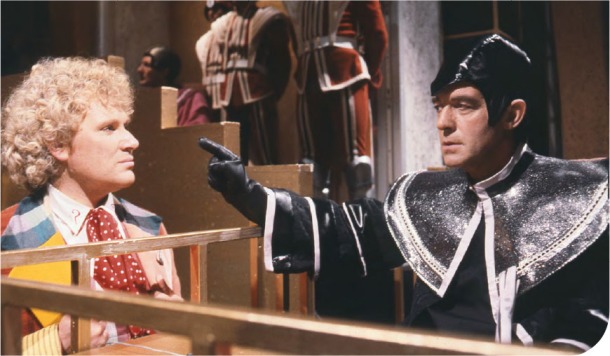 Parts Nine to Twelve (Terror of the Vervoids) is very much an archetypal Doctor Who story. It’s part-murder mystery, part-base-under-siege story and features Colin Baker‘s most vibrant and colourful costume ever. Honor Blackman guest-stars as a scientist, whilst the main baddies – the Vervoids – are rather peculiar Who monsters. Older fans might see them as looking rather crude, shall we say, while younger fans will be repulsed by the surprisingly good costumes but the voices… not so much. It’s bold and colourful, lots of fun and there’s three versions to choose from!

Parts Thirteen and Fourteen (The Ultimate Foe) is a rather peculiar finale to the season and despite its admittedly anti-climactic ending, features some wonderfully strange and bizarre sequences in the Matrix (no, not that Matrix, the Matrix of Gallifrey). I’ve always enjoyed Who‘s more surreal episodes and The Ultimate Foe is a nice re-working of a similar concept used in Robert Holmes‘ The Deadly Assassin a decade prior. It’s also here that Jayston‘s Valeyard finally gets his chance to shine as the Doctor’s ultimate foe. It’s a pity the character never returned to the series, but Big Finish have released Trial of the Valeyard, a one-off adventure and sequel to The Trial of a Time Lord, that hopefully resolves some of the loose ends (I have yet to listen to it, but shall do now that I’ve finished this).

All fourteen episodes of The Trial of a Time Lord are accompanied by a 5.1 surround-sound mix (courtesy of sound maestro Mark Ayres), as well as a music-only option and the original mono mix. The picture transfer is a definite improvement over the DVD, looking much sharper and detailed, but one can’t help but wish that the season had been shot on film as opposed to video-tape, as Trial just doesn’t look nearly as good as Spearhead From Space, or even the Season 19 box-set released last year. Huge credit to the restoration team for making it look as lovely as it does though. 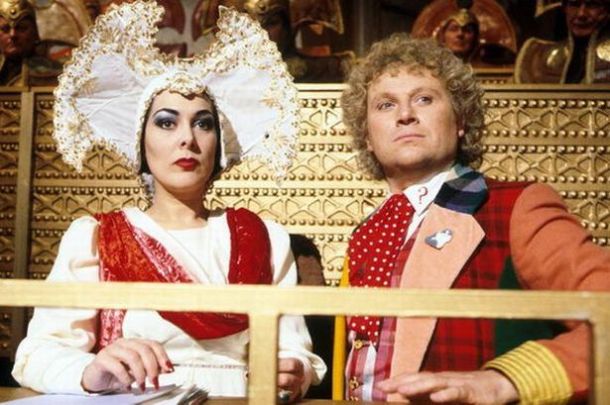 There are also alternate extended edits of every episode, with some even five minutes longer than the original transmitted versions, whilst Terror of the Vervoids receives a Special Edition re-edit, complete with an updated title sequence, new visual effects and no Trial segments. It’s a fun watch on its own, even if the opening narration seems a little odd without the Trial context. There are of course commentaries, with some shipped over from the DVD release, as well as the Collection staple: the Behind the Sofa features. Colin Baker, Nicola Bryant (Peri) and Bonnie Langford (Mel) have fun commenting on the episodes Gogglebox-style, whilst the inclusion of an extra panel with Frazer Hines (Jamie), Matthew Waterhouse (Adric) and Mark Strickson (Turlough) seems a little random and perhaps unnecessary, given that none of them had any involvement with the season.

The excellent 4-part making of documentary is shipped over, along with the music videos and several other features. New to this release is The Doctor Who Cookbook Revisited – a fun Masterchef-style feature narrated by India Fisher (both a Masterchef and Big Finish Doctor Who alumni), which despite showing initial promise does start to lose steam after a while. Some contributions are funnier than others, but there’s nothing quite like watching Terry Molloy (Davros) cooking for his Daleks in-character. The Doctor’s Table is another food-related feature in this release (was someone very hungry when they decided to make this set?), and features some fun anecdotes from the stars of Season 23, with Colin Baker, Nicola Bryant, Bonnie Langford and Michael Jayston dining together. It’s random, but Colin’s “I love puddings” is enough to put a smile on even his worst detractors. There’s also a restored 35mm film model sequence (from the opening); Matthew Sweet interviews Bonnie Langford in a small featurette; and The Writer’s Room: Season 23 provides a wonderful glimpse into the season that never was with the assorted writers, audio clips from Big Finish adaptations and fantastic artwork helping viewers to imagine stories they can only otherwise read or listen to. Doctor Who: The Collection – Season 23 might at first glance seem like a rather disappointing Blu-ray release from this range but much like The Trial of a Time Lord itself, it deserves a second look, upon which fans can enjoy a wealth of special features and new, alternative ways to watch a truly under-appreciated season of the show. Even if like me, you already own the DVD, this Blu-ray set is well worth a purchase and quickly, before they inevitably sell out and descend into the oblivion of the Matrix…

Doctor Who: The Collection – Season 23 is out now on Blu-ray, order here: https://amzn.to/34aniIU