After the incredibly disappointing first instalment, read my review here, I was in two minds about whether to continue watching BBC One’s adaptation of The War of the Worlds. I was, however, eager to see tripods rampaging across Edwardian Britain, and surely the second episode could only improve on the first…? Well, I was wrong.

Unfortunately, episode two has all of the problems the first one suffered from, which further reiterates how lacklustre this television adaptation is. I do wonder why the BBC even thought it was worthwhile, given that they don’t appear to have thrown much money at what should be a very expensive science-fiction epic. This version has the production values of a modest period drama, with the occasional green-screen shot of a tripod in the background. There’s no feeling of interaction between the tripods and the characters on-screen and often it feels like the talents of Eleanor Tomlinson, Rafe Spall and Rupert Graves are reserved to staring at green-screens. Whilst there’s one moderately impressive shot of a tripod collapsing on the beach, everything else just looks so separate from the main action. The visual effects are perfectly fine, and would be impressive for a BBC Drama if they actually seemed to interact with the live-action elements but I’ve seen considerably worse CGI in older episodes of Doctor Who.

It also doesn’t help that I struggle to find a reason to care about George and Amy. I don’t feel much chemistry between Tomlinson and Spall, despite both being very good actors and the characters are quite dull. Despite having not seen the film in years, I can still remember the central character dynamics in Spielberg’s War of the Worlds (2005), which centred around Tom Cruise as a single father struggling to connect to his kids. Sure, that’s pretty clichéd, and so is the central dynamic in this version, but at least Cruise’s character felt endearing because of how flawed he felt. Amy and George just have little personality beyond looking off into the middle-distance or shouting each others’ names.

Spall also looks pretty bored for most of his scenes, which all feel incredibly disjointed thanks to some frankly awful editing. Don’t agree with me? Fair enough, but please explain what on Earth was happening with the old woman and her husband. They appear beside George, then he’s carrying the old man and then two scenes later he’s disappeared and Rupert Graves is helping the old woman along. What’s going on? Who are these people? Where have they come from? How did they get back to the old woman after the attack on the beach? This is what I mean by bad editing: there are huge narrative gaps the size of a tripod for which no answers are given. Even in the flash-forward scenes when Amy is talking to Oglivy they keep being discovered in different places. There’s no consistency and seemingly no effort to tell the story. 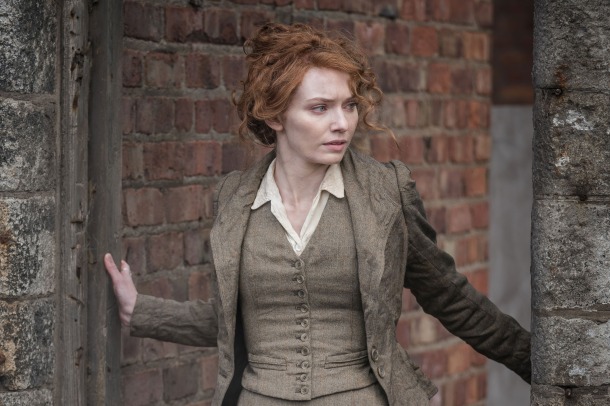 As a further example, the protagonists discover a little girl and decide to look after her, Spall carries her dramatically over the beach and then gives her a manky teddy bear because the audience needs to empathise but this kid has no characteristics, and doesn’t even talk. There’s no actual dynamic. You know how Newt in Aliens represents Ripley’s motherly instincts, and makes her seem vulnerable and human despite her badass action-heroine characteristics, and how this parallels the film’s main villain? Well, here in The War of the Worlds, that kind of narrative intricacy just isn’t important. Here, the Minister of War will just comically bellow to the camera about the British Empire expanding to Mars, because writer Peter Harness has absolutely no idea how to subtly implement the themes of H.G. Wells‘ novel into a three-hour TV series.

As a novel, The War of the Worlds is filled to the brim with striking images, incredible action set-pieces and a genuine attention to detail. Wells ensures that we understand the full scope of the Martians’ invasion, tells us how overwhelmed the British Army are by the Martians and also hints at how the arrival of the cylinders leads to the attack of the tripods. This adaptation swaps cylinders for spheres, and then completely misses the point. There’s no Martians inside building their tripods, instead they just disintegrate and a tripod just…appears. Where the hell are the tripods actually coming from? What is the point of the cylinders? Why does Harness insist on throwing in flash-forwards to a post-apocalyptic future when he can’t even tell the present-day story properly? The tripods have novel-accurate heat rays that burn their victims, but these sequences aren’t directed with any style, pace of flair.

Sadly, as you might have guessed, this adaptation simply doesn’t work. and while it’s filled with intriguing ideas – such as the black smoke gradually terraforming the planet – there’s nothing substantial to offer their audience. Whatever happened behind the scenes has resulted in a poor excuse for a prime-time BBC science-fiction series.

The War of the Worlds is on BBC One and iPlayer now.

2 thoughts on “BBC One’s The War of the Worlds: Episode 2 review”