There was a moment in this final episode of BBC One’s The War of the Worlds when I thought the show had hit its stride and finally focused on a story worth telling. As Amy (Eleanor Tomlinson) and Frederick (Rupert Graves) investigated the creepy building (I’m still not sure exactly what it was), the music was very eerie and the problematic editing slowed to build up some tension. Unfortunately, this very quickly got swept aside in favour of a surprisingly empty final installment with nothing to add other than “and then The End“. Even this series’ biggest fans can hardly call this a satisfying conclusion.

Despite only appearing in one shot in the first episode, and only a handful in the second, the tripods didn’t appear here… at all. Yes, the iconic tripods that featured so heavily in the marketing are barely involved. Instead, this episode offered us a look at the Martians inside, in all their Stranger Things‘ Demogorgon crossed with Return of the King‘s Shelob glory. They’re a spectacularly unimaginative design, which coupled with their constant growling just makes them seem like generic monsters. There’s no expression, no apparent intelligence or communication with these Martians and they hardly resemble H.G. Wells‘ description of these horrible, black, squid-like creatures. The novel’s unnamed narrator also remarks that the Martians struggle under Earth’s gravity, leading to their conquest via the tripods, which doesn’t seem to be an issue for these invaders. They scuttle about quite happily, and then feast on human flesh…because screenwriter Peter Harness just had to make them even more generic. It’s a neat touch that the Martians gain Earth’s diseases through consuming human beings, but I also quite like the quintessential Britishness of Martian invaders being defeated by a cold. Oh well. 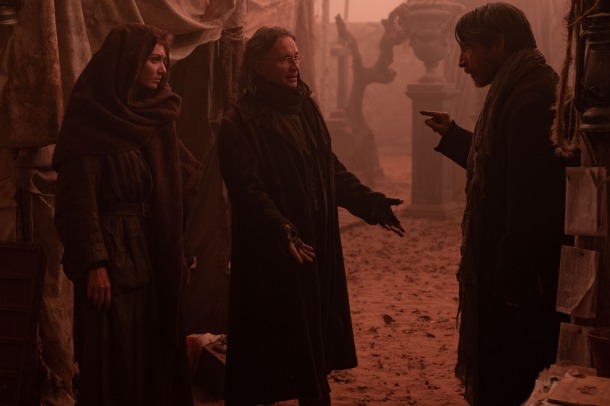 Part 3 isn’t as horrifically edited as the previous two installments but it drags on the most, with little story to tell and no real action. Sure, most of the characters die – apart from the ones who probably should have by now, such as Ogilvy and George Jr. – but these moments don’t carry much weight. The characters mostly die out of sheer stupidity. Quite why George (Rafe Spall) needed to sacrifice himself to the Martian that wasn’t even standing guard on him and Amy, I have no idea. Seriously, and then Amy screams his name out just after he dies and the Martian just ignores her while she runs away slowly. Why wouldn’t the Martian just leave George for a minute, kill Amy and then drag her back for an extra meal? Or, given that there’s meant to be two Martians scuttling about, why didn’t that other one go after her? Oh, and on top of all of that, why on Earth did Amy think that George might be alive in Episode 2 when he very clearly got killed by a Martian. What was he gonna do, just shrug it off the way Ogilvy shrugged off apparently not being killed either on-screen or off? Or, the way George Jr.’s sickness was made a big deal of in the last episode only to be virtually forgotten about by the end. As you can tell, I have so many unanswered questions. 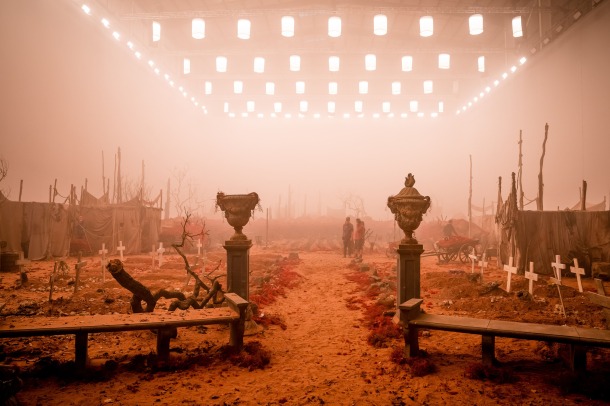 It doesn’t help that Harness’ dialogue reaches spectacular levels of terrible, whether it be George’s speech on how the Martians’ invasion is just like that of the British Empire (do you want to be any less subtle, Harness?) or how Frederick rambles on about how God didn’t make Martians, or the future Priest’s spectacular line “that’s not Christianity, that’s Darwinism!” If the script wasn’t this mind-bogglingly on-the-nose with its themes, or had better dialogue, or more engaging characters, or just threw everything and the kitchen sink in for a spectacular, mindless action extravaganza, one could forgive its issues. But Harness doesn’t succeed with any aspect of the story and ends up providing a completely underwhelming and uninteresting reworking of the novel. We don’t get to see the Martians dying across the planet, we don’t get to see any flashbacks when Amy is talking about her life in India nor anything that might engage us as an audience. It’s the most tedious version of The War of the Worlds one could possibly make.

I’d like this series to work on some conceivable level, but it simply doesn’t. I know that I’ve criticised Harness and director Craig Viveros in these reviews quite a bit, and it could be argued that they don’t entirely deserve the blame, but I don’t know who does. This doesn’t feel like a complete show but what’s actually here still isn’t very good. It’s not badly-made: the visual effects, production design, costumes and most of the performances are good, but the writing, direction and editing are what let it down. When BBC One put this on mere moments after the ambitious, big-budget adaptation of His Dark Materials (that actually understands what it’s adapting and their appeal), it’s difficult not to feel completely underwhelmed. They could have made a really good adaptation of The War of the Worlds but have seemingly chosen not to. When Tomlinson looks up at a small patch of Earth sky at the end in hope, it seems to almost reflect her joy at finally being done with this series – a joy I myself, and I imagine other viewers, feel too.

The War of the Worlds is on iPlayer now.

One thought on “BBC One’s The War of the Worlds: Episode 3 review”