If you have a favourite film that you’ve seen a million and one times (and let’s face it, you probably do), then chances are its become pretty familiar, no matter how enjoyable it is on another re-watch. Our advice to spice things up? Watch it at the Royal Albert Hall projected onto a colossal big screen in glorious cinematic quality to an audience of 5,272 (give or take), accompanied by a live score performed by the Royal Philharmonic Concert Orchestra! Trust us, it works.

We can’t confidently say this kind of viewing experience works for all films and when said-film is Jurassic Park, Steven Spielberg’s prehistoric masterpiece, we confidently contend that it works an absolute treat and even more so as the winter evenings draw near. In truth, Jurassic Park was practically made for this kind of format – legendary composer John Williams‘ iconic score is the perfect music to hear performed live – a beautiful, sweeping collection of recognisable themes which capture the awe and wonder the central characters no doubt feel throughout, performed in a way that guarantee goosebumps aplenty (not to mention a few shredded nerves once that infamous kitchen scene kicks off).

The real highlight of these events (and this one in particular) is the precedence the music is given and the way certain background motifs, stings and themes that were barely noticeable before are bough to the forefront. You really appreciate the amazing, meticulous work that comes with being a film composer, with the tiniest musical moments (many of which usually go unheard) standing out for all to discover.

Watching favourites in this manner is a genuine, fantastic night out for lovers of all things film, classical music and everything in-between. The Royal Albert Hall once again delivers an unforgettable night that not only celebrates one of the greatest films of all-time (currently celebrating its 25th Anniversary Year), but also the composer and musicians who work tirelessly behind the scenes to create moments of joy, wonder and, very occasionally, a scare or two are at the top of their game.

The Royal Albert Hall regularly screen classic films with live orchestral accompaniment, see our previous review for night with Star Trek, plus keep an eye out for special events that include the likes of Danny Elfman and Michael Giacchino gracing the historic halls.

Find out more about upcoming titles that include Amadeus, Harry Potter and the Prisoner of Azkaban, Star Wars, Home Alone and more here www.royalalberthall.com/tickets/films-in-concert 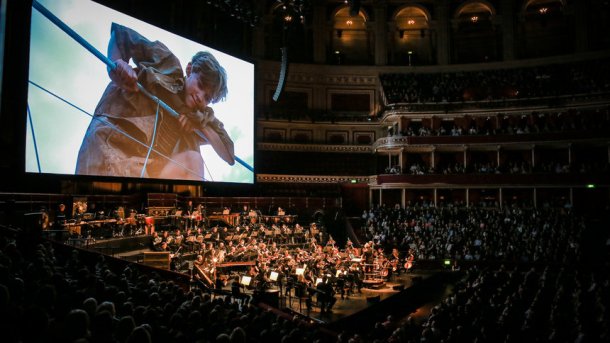