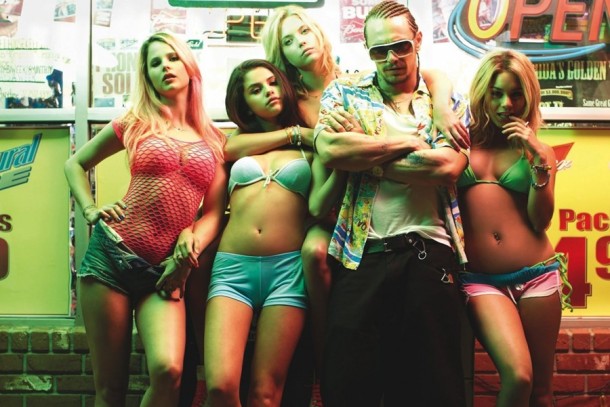 Back in 1995, director Harmony Korine sent them spinning with his screenplay for critically-acclaimed Kids. That shocking and disturbing effort gave the 19-year old his break and while he hasn’t stopped working since, Spring Breakers is by far his most commercial, accessible feature.

In Spring Breakers, we follow four American college girls, Candy (Vanessa Hudgens), Brit (Ashley Benson), and Cotty (Rachel Korine) who are looking for any kind of trouble and have recruited Faith (Selena Gomez) to the gang, a girl they’ve known all their lives but represented as a more reserved, Christian type. Tired of their ordinary existence and saving up to escape their boring day-to-day lives, they head off to party on spring break. But there’s an issue, they’re flat broke and so, without further ado, the three feisty girls (without Faith) balaclava up and audaciously rob their local Chicken Shack. They’re armed, violent, fired up with cocaine and the self-made motto ‘Pretend it’s a video game’ (no doubt a dig at the type of coverage such things get) but pull off the heist effortlessly.

Celebrating their success and hitting Florida, we witness that the parties never stop and all four float around between drink, drugs and other forms of anarchic abandonment until they’re raided at a private party, and end up in jail. Here, they meet James Franco’s Alien, in one of his best roles to date. Franco’s gleaming metal teeth and corn-rowed hair put him in a place that pushes him almost beyond recognition.  I sometimes feel he can’t take on a serious role, but his comic ability and slightly unnerving presence here come together perfectly. Here he’s equally creepy and caring, bailing the girls out of jail to enrol them into his cult of guns and good times, which includes a scene where he shows off his weapons, t-shirts and shorts that is nothing short of brilliant.

Although Spring Breakers takes you on a ride of sun, sex and Skrillex, it does actually also has a coherent story-line, together with some quite stunning Drive-style cinematography. There’s an impeccably suited-soundtrack (managed by Drive’s Cliff Martinez) alongside continual interesting scene-to-scene frame work. Occasionally, you’ll feel that the editing feels disjointed, but it’s actually in the process of smartly pushing back and forth through the narrative until it returns to a focused point.

It seems that lying underneath is an observation from director Korine on American consumption alongside the lack of conscience and consequence. Spring Breakers isn’t about exploitation though, it’s about how we all take advantage if it’s something we want for ourselves, a somewhat deeper delve into that addiction in the hunt for desire and control. While some may flounder around in conversation over the obvious attractiveness of the four leading ladies, they’re ironically missing the bigger picture of the bravado and beauty of Spring Breakers itself.

It’s also not as serious as it sounds though, there are unforgettable scenes that stick in the memory and bursting with dark humour, plus one specific piano scene that verges on self-parody but somehow… Korine gets away with it. Go see Spring Breakers, it’s exhilarating, original, and features a whole load of uninhibited ethereal exploration.

Spring Breakers was originally released in 2013 and is streaming on Amazon Prime: https://amzn.to/2PpR6Nt

My review was originally published on THN.