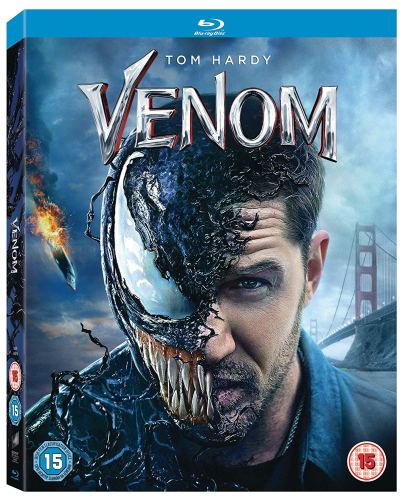 If you’re any kind of Venom fan, then you’ll know they didn’t do the gloriously unpredictable character any justice in the deservedly maligned Spider-Man 3 and so while I think this film is long overdue, and it’s something I thought we’d never see, I’m thrilled it’s finally here and that mainly comes down to a terrific, body/mind takeover performance from the truly gifted Tom Hardy as the coolest, head-chomping anti-hero.

Directed by Zombieland’s Ruben Fleischer, Venom sees Hardy play Eddie Brock, a reporter who exposes hidden truths for his TV station. He’s riding along on a high, and it’s mentioned that he left a job in New York to move to San Francisco, with his fiancée Anne (Michelle Williams) and generally loving life. But, of course, things go wrong when he breaks a trust arrangement with his employers after interviewing Riz Ahmed’s fringe scientist Carlton Drake – a man who runs the powerful Life Foundation and funds the company Brock works for – and he’s fired and also loses his girlfriend, because Brock also shares confidential information he’s not supposed to know from her job as the district attorney. 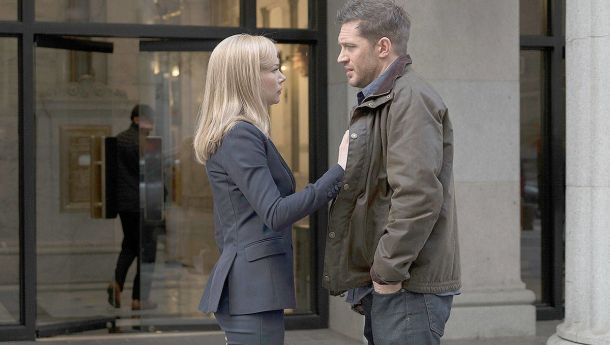 Down on his luck and looking for a way back, he’s assisted by Jenny Slate’s Dora Skirth, a Scientist who works for the Life Foundation and doesn’t like the shifty experiments taking place, Brock breaks into their science lab and tries to rescue a homeless friend who he knows but, there’s more, her body is hosting the alien symbiote ‘Venom’ and it jumps to Brock instead… and they escape. It’s not long before Brock learns there’s something very crazy going on as he develops super strength and, the main thing here, another voice in his head and a whole lot more.

Thankfully, they don’t mess around before we get to the good stuff, Venom becomes a part of Brock, and Brock is taken over by Venom and they begin to balance as ‘one’ and fun blasts onto the screen. The strongest parts of Venom are the focused character moments, Tom Hardy is exceptional as he’s pushed and pulled between his own beliefs, and those of the symbiote within. It’s also a really humorous film and Hardy shows of his effortless comic abilities. Between attacking bad guys and Venom biting off heads, when necessary of course, there’s an ongoing fight between what Venom wants to do and what Brock thinks is right and wrong.

Graphically, they’ve got Venom right where we want him, both dangerous and witty and with a ‘form’ that can pretty much do anything and go anywhere, with his host in tow. The teeth are fearsome, the Spider-chest symbol is missing (which makes sense in a figurative Spider-less world… at the moment) and the tongue isn’t over done. Most of all though, he’s a force to be reckoned with and huge in both size and entertainment value, I could watch Hardy (much like James McAvoy in Glass) in the character role for hours, he’s outstanding. The one downfall for everything is the big ‘finale’ fight scene which comes and goes so quickly, you wonder if they made a decision to over CGI it and just get it out of the way so they could get back to the personality focus.

While the film did go through a lot of development issues, it’s the co-starring cast of Hardy, Ahmed and Michelle Williams who make it all work. Ahmed plays it faultlessly evil and goes out to prove he’s great in a whole variation of roles, both believable as being power-hungry but also effective as the bad guy. Williams is probably, well quite brutally, underused but she looks like she’s having a lot of fun, as does Hardy. With the way everything is summed up, there’s a sense we’ll get to see the lethal projector in another outing and, if the studio are brave enough, they’ll give a lot more time to the character-based moments where Venom undoubtedly works but, of course, let him use those astonishing alien skills whenever they can! Him and Spidey on screen would be superb and, finally, stay for the final credits….

Venom is on Digital now, and comes to 4K UHD, Blu-ray, DVD on 4 February.

Order it now: https://amzn.to/2HNlE9Y and enter our DVD giveaway by clicking here. 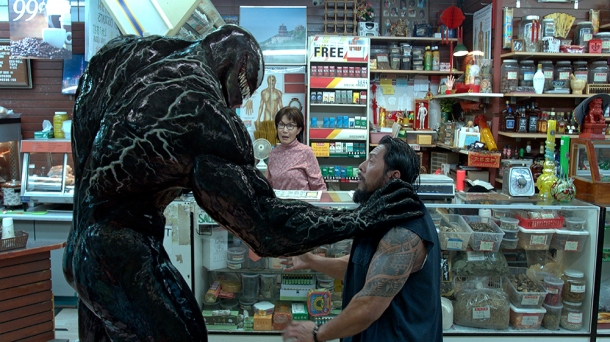 Blu-ray and 4K Ultra HD Bonus Materials:
• Venom Mode: When selecting this mode the film will engage informative pop-ups throughout the film to provide insight on the movie’s relationship to the comics, and to reveal hidden references that even a seasoned Venom-fan may have missed!
• Deleted & Extended Scenes: These deleted and extended scenes will give fans even more of the Venom action they loved in theatres!
o Ride to Hospital – Eddie and Venom take a ride to the hospital.
o Car Alarm – Let’s just say that Venom is not fond of car alarms.
o San Quentin – Extended post-credits scene at San Quentin.
• The Anti-Hero: A featurette about the history of Venom in comics and his journey to the big screen. Interviews with Avi Arad, Matt Tolmach, Ruben Fleischer, and Kevin Smith.
• The Lethal Protector in Action: Go behind the scenes with the production crew and learn the secrets behind the awesome Motorcycle stunts, wire stunts, and drones.
• Venom Vision: A look at how Ruben Fleischer came to the project, gathered his team, and made Venom a reality. Utilises interviews from cast, crew, and producers as well as Fleischer himself.
• Designing Venom: Designing and creating Venom meant a huge challenge for VFX artists; follow the amazing journey.
• Symbiote Secrets: Blink and you may have missed it! Enjoy the hidden references throughout the film.
• 8 Select Scenes Pre-Vis sequences: See the progression of the visual effects, storyboards and fight choreography compared to the finished film.