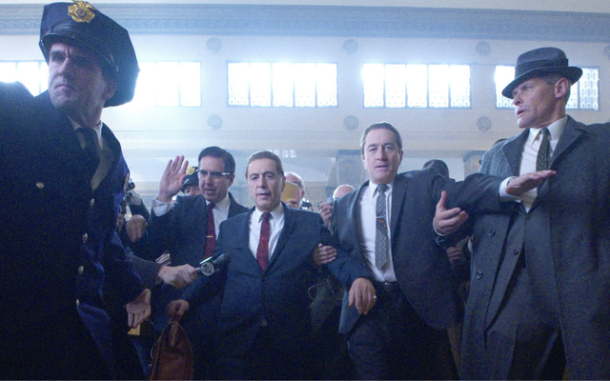 Well here’s one I didn’t see coming and it looks huge! Let alone the fact The Irishman is directed by Martin Scorsese, it’s set to be an ‘epic saga of organised crime in post-war America’, and will span several decades as we witness as ‘de-aged’ Robert De Niro, as you’ll see in the trailer!

Not only De Niro stars though, the cast is huge and this includes the return of Joe Pesci, teaming up with Scorsese again, plus Al Pacino, Anna Paquin, Jesse Plemons, Stephen Graham, Harvey Keitel and Bobby Cannavale. Based on the book I Heard You Paint Houses, by Charles Brandt, this mafia epic sees De Niro play Frank Sheeran, a hitman for the Bufalino organised-crime family, who’ve got one hell of an infamous history.

The Irishman is told through Sheeran’s eyes to re-play one of the unsolved mysteries of American history, the disappearance of union boss Jimmy Hoffa (Pacino). I was captivated by this trailer, and then realised it’s also coming to Netflix (!) but first it’ll debut at the New York Film Festival on 27 September. We’ll bring you news of the official ‘global’ release date, with rumours of a cinema release, as we hear it.

In the meantime, enjoy this one, it feels like one of those classics already:

The Irishman is coming soon…

2 thoughts on “Pesci, Pacino and De Niro star in iconic first trailer for Scorsese’s The Irishman”