If you thought the line-up for Black Deer Festival 2019 was already superb, well sit tight… are the festival are proud to announce that The Shires have been added to the ultimate celebration of Americana and country in Eridge Park this June. Having become one of the most talked about acts in the home of country music, and with a legion of fans on both sides of the Atlantic, the Nashville based duo have a lot to offer to the new UK festival. Ben Earle and Crissie Rhodes have two gold-certified record-breaking albums in their arsenal of brilliantly crafted songs, they had this to say:

“We’re really excited to play Black Deer Festival with some of the most influential artists in Americana and country music. We can’t wait to perform in the stunning surroundings of Eridge Park in just a few short weeks – it’s going to be a truly special summer show.”

In homage to the classic delta blues slide players like Mississippi Fred McDowell, Howling Wolf, John Lee Hooker and their own Rockfree Base, Alabama 3 will present a stripped down acoustic set this year. Complete with Larry Love’s gravelly ash-stained vocals and Nick Reynolds bank robber melodies on harmonica, they promise a raucous and unrestrained rendition of their esteemed back catalogue. After emerging in London in the late 90’s the nine-piece band have become synonymous with Americana, leftist politics and laughter – and through their brilliantly theatrical live shows command a huge following here.

There’s also The Magic Numbers who join the line-up, bringing unique harmonies, melodic hooks, songwriting craftsmanship and a timeless sound. Comprised of two pairs of brothers and sisters (Romeo and Michele Stodart, Sean and Angela Gannon), the Mercury Music Prize
nominees are set to resonate with the family friendly audience. The band have previously toured around the world with the likes of Brian Wilson, Neil Young & Crazy Horse, The Flaming Lips, Sonic Youth, The Who and Bright Eyes to name a selection.

Adding a dose of catchy, heartfelt soul, Canadian singer-songwriter Stephen Spender, who currently resides in London to record his forthcoming fourth LP. Spenders’ affinity with the UK began after studying at the Academy of Music and Dramatic Art in London early on in his career, and sings with a raspy, honest and melodic voice which he honed over the years busking in Canada. His experience in Canada and the UK has lead to comparisons to the likes of English songwriter David Gray, as well as American legends Paul Simon and Ray LaMontagne.

We’re not done yet, because Black Deer Festival are also welcoming Kent locals The Breretons into the fold this year. Described as noir folk draped in hard rock sentiments, their debut album exhibits dark undertones drawing from long days and nights growing up in the Kent sticks. The band are set to bring their own special glimmer of Americana to the Park! 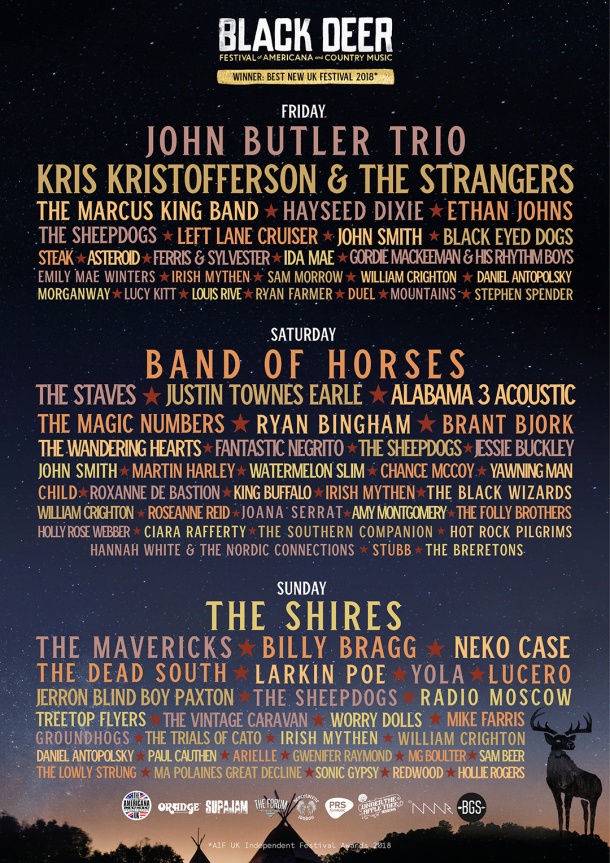 Black Deer celebrates a culture like no other. With a genuine love for the music, its honesty, its roots and heritage, it’s all about listening to the story behind the experience, both light and dark and is more than just a music festival, it’s an absolutely beautiful experience, check out our review from last year!

This year, Black Deer Festival are delighted to welcome the Americana Music Association UK (AMA UK), Orange Amplification, Desertscene and Barons Speed Shop as this years partners, as well as a return from the inspiring Supajam and esteemed Tunbridge Wells Forum.

One thought on “Black Deer Festival add The Shires, Alabama 3 and The Magic Numbers to their huge line-up!”