I’ve been excited about this Joker film since I found out Joaquin Phoenix was taking on the Clown Prince of Crime, can you believe it was September we got our first look? The fact we’re finally going back to his deeper origins, for the first time on the big screen, and with rumours that it’s influenced by the likes of Alan Moore and Brian Bolland’s Batman: The Killing Joke, well, I’m properly hyped for what they might bring.

The early teaser, from Director Todd Phillips, held everything I was hoping for from the team up, when they paired it with a very subtle music track in the shape of The Guess Who‘s ‘Laughing’ for Phoenix’s Arthur Fleck, it already seems like the cards were falling into place. He’s playing a failed comedian (like in TKJ) and will end up losing his mind, as we see in the trailer below, and possibly starts to obsess over some very specific people… which could well be the Wayne’s… and it can’t be long until crime and chaos starts to kick off in Gotham City, with him as the inspiration.

So, yes, this is very much a geek out in terms of them hitting the mark for what I specifically want to see but how will a ‘general’ audience react? Obviously, that’s the target for Warner Bros and if the excitement from fans across social media is anything to go by when the new trailer below was released this week, well, we all sincerely hope Joker is as dark and inventive as it looks. It’s got Arkham, it’s got the progression of character and it has got that laugh coming through, so far, so good.

In terms of Director, Phillips is somewhat of an unknown in this genre and despite his main success being The Hangover trilogy, I’d highly recommend watching War Dogs if anyone is intrigued by changed stylistics. And while Heath Ledger is, of course, the finest Joker, after Jack Nicholson‘s excellent comic, joker in the pack, Ledger was the twisted human within – somewhere – but now Phoenix is sure to take us even deeper.

Also, while I’ve read some consider Joaquin to be ‘underrated’, those who know his work will understand that’s simply misguided because he’s rarely unexceptional. We also know, from interviews, that Phoenix is very specific about the character and the story, and with that comes a dedicated responsibility to getting it right. Whether this gives him a bigger spotlight really doesn’t matter overall, it won’t change his approach, but what we should get is something special. It almost feels like the Heath Ledger film we, sadly, never got to see…. 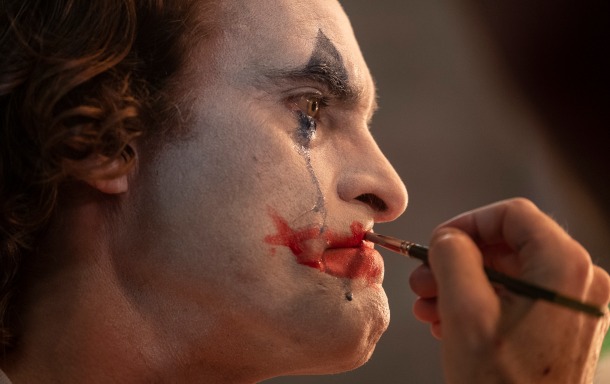 Phillips directs from a screenplay he co-wrote with writer Scott Silver (The Fighter), based on characters from DC. The film is produced by Phillips and Bradley Cooper under their Joint Effort banner, and Emma Tillinger Koskoff. Behind the scenes, Phillips is joined by director of photography Lawrence Sher, production designer Mark Friedberg, editor Jeff Groth, and Oscar-winning costume designer Mark Bridges.

Joker opens in the UK on 4 October from Warner Bros.